NOP 2020: Canadian Support for Education About Asia is Strong and Growing

As the baseball philosopher Yogi Berra once said, “It’s tough to make predictions, especially about the future.” But some predictions are all but certain to come to fruition. One is that Asia will continue to become a major source, if not the largest source, of global influence and dynamism. Consulting giant McKinsey & Company argues that this shift means we must update our vocabulary, from talking about Asia “rising” to recognizing that in many ways, Asia is now “leading.” This shift also compels us to think about how we prepare Canadian youth for this changing world. It turns out, many Canadians are thinking about this as well.

Since 2004, the Asia Pacific Foundation of Canada (APF Canada) has surveyed the Canadian public on a range of issues that shape our relationship with this strategically vital region – for example, trade and investment, immigration policy, politics and human rights, and opportunities for people-to-people diplomacy. In 2012, we began to include questions related to education, specifically, whether we should be placing more emphasis on teaching about Asia in our schools.

Below, we present a breakdown of the most recent results on this last question – that is, how many Canadians, and which groups of Canadians, support more teaching about Asia and its diverse cultures, histories, political and economic systems, religious traditions, and environmental and demographic challenges. We focus on how these numbers have moved over time and how support correlates with factors like region (province), age, and level of education. We conclude with a brief discussion about whether we should also be placing more emphasis on teaching Asian languages.

Support for teaching about Asia is strong and growing

As of 2020, 63 per cent of Canadians felt that we should be placing more emphasis on teaching about Asia. This is the highest level of support we have seen since we first began asking this question in 2012 when support was 42 per cent. There is, of course, some subjectivity in how people interpret what it means to “place more emphasis” on teaching a particular subject matter. However, we can reasonably interpret this result to mean that a majority of Canadians have some sense that Asia’s growing importance means that it merits more attention than it has received in the past. In fact, in our 2017 poll, we included a related question – whether respondents felt they received enough education about Asia in high school. For people under the age of 35, nearly two-thirds (67%) said it was “not enough.” Among people over the age of 35, it was only slightly less – 64 per cent. 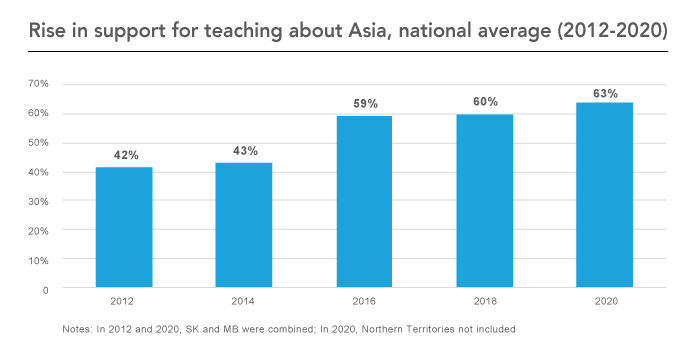 Support is high across Canada

At least 60 per cent of people in all provinces or regions would like to see more emphasis on teaching about Asia. Support is highest in British Columbia (B.C.), at 70 per cent. This may be unsurprising, given that B.C. is Canada’s Pacific-facing province and one whose trade patterns and past and current immigration have created strong webs of connection to that region. However, geography is not destiny; the region with the second-highest level of support is the Atlantic provinces, having risen 24 points, from 43 per cent 2012 to 67 per cent today. While the survey cannot provide a clear explanation for this substantial movement in public perception, we can make some educated guesses. One might be a recognition among those provinces’ populations that immigration, including from Asia, will play a crucial role in offsetting regional demographic trends such as an aging population, and helping to contribute to local economic vitality.

Another notable provincial story is Quebec. In 2012, its support for increasing teaching about Asia was the lowest, at 27 per cent. It has since made astounding gains, more than doubling to 60 per cent support in 2020. Here, too, we are left to speculate as to the reasons. One might be the increasing awareness of Asia and the coverage of Asian affairs in Quebec-based media, which in the past had focused more on local issues or skewed more toward coverage of news from Europe. Another reason, as was identified in a 2018 analysis of Quebecers’ views of Asia, might be the province’s generally more favourable views toward trade and investment with the region’s two largest economies, China and Japan, as well as more favourable views of immigration from Asia. 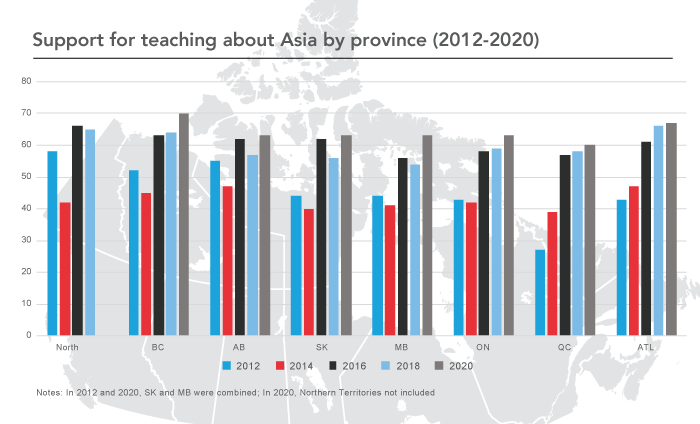 Age and education level matter, but not that much

Generally, younger respondents and those with more formal education are more supportive of increasing education about Asia. However, with a couple of exceptions, the level of support does not vary by substantial margins. In terms of age, we find the highest support among those aged 18-34, at 67 per cent. For the 35-54-year-old cohort, it drops to 60 per cent, which is still a solid majority. Interestingly, support rises to 65 per cent for the 55+ group.

In terms of education level, we find a gap between those with a Bachelor’s degree or higher (69% support) and those with less than a Bachelor’s degree. However, there is no statistically significant difference in the level of support between those with a high-school diploma (58%) and those without a high-school diploma (59%). Here, too, we are left to offer educated guesses about what might explain this gap. Some research has suggested that people with less than a university degree tend to be less supportive of certain types of international engagement, such as free trade agreements. But other researchers have also found that the relationship between education level and support for international trade is not that straightforward and may be tied more to the types of ideas to which people have been exposed, rather than simply whether they hold a four-year degree or not. Finally, we should be cautious about assuming that support or non-support for specific international economic policies is a reliable indicator of whether or not one supports efforts to ensure that the next generation is well-informed about (and perhaps economically competitive in) strategically important parts of the world. 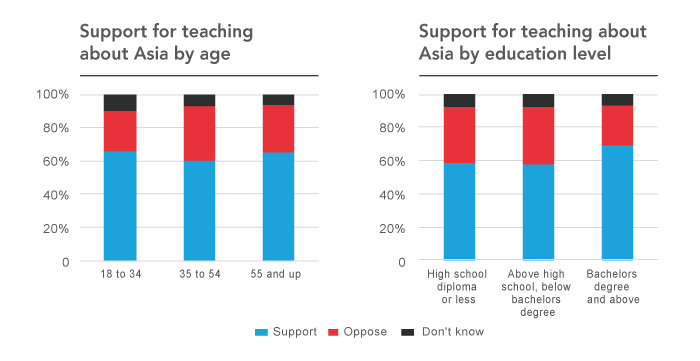 Support for language lags, but is gaining ground

In the same polls referenced above, we also asked about people’s support for teaching Asian languages. As of 2020, national-level support is 41 per cent, with B.C. being the most supportive (51%) and Saskatchewan and Manitoba (combined for statistical purposes) showing the lowest level of support (29%). In Alberta and Ontario, support is at 42 per cent, followed by the Atlantic provinces (40%) and Quebec (37%).

When we consider the age factor, support was once again highest (49%) among the youngest age group – those between 18 and 34 years old. For those aged 35 to 54, support drops to 41 per cent, and then further to 37 per cent for those 55 and older. Also, much as in the case with teaching about Asia, we find a correlation between education and level of support, with those holding a Bachelor’s degree or higher being the most supportive (49%), as those with a high-school diploma (34%) or less than a high-school diploma (35%) being less supportive.

We could ask why there is roughly a 20-point gap between 1) support for teaching about Asian cultures, histories, economies, and so on; and 2) support for teaching Asian languages. The reasons here may be a complex mix of factors. One might be that increasing the availability of Asian-language courses could be seen as competing for curricular space with French-English bilingualism. Another is the greater costs involved in starting and sustaining language programs, compared to incorporating units or lessons about Asia into existing social studies or literature courses.

A third possible reason might be that the so-called cost-benefit analysis of learning a foreign language has not been well understood or communicated. There had been a long-standing perception that learning the language of a major economy like Japanese or Chinese would work like a key that unlocked all kinds of professional and business opportunities. In recent years, however, we have refined our understanding of the role of language capability: it is not necessarily an initiator or ‘materializer’ of engagement or opportunity, but rather a facilitator of relationships or a tool to aid in mutual understanding.

Finally, we note that while support for teaching Asian languages is lower than teaching about Asia (history, economics, geography, etc.), support has nonetheless been growing steadily – from just 25 per cent in 2012 to 41 per cent today. So, while there is still some uncertainty about the benefits of investing in Asian-language capacity, the overall pattern is one in which more and more Canadians believe this could be a valuable skill for our young people to have.

There have been some education initiatives in Canada that reflect Asia’s growing global importance. For example, in early 2017, the B.C. government, in partnership with APF Canada, announced the Asia Pacific Curriculum project, a pilot initiative to give B.C. students greater exposure to Asia through its social studies curriculum. This provincial commitment has happened, alongside a series of “Legacy Projects” focused on educating primary and secondary school students about the histories and contributions of people of Asian heritage.

However, Canada as a whole has yet to adopt a broader and more ambitious project to educate its youth about Asia, as has been done in Australia, New Zealand, and various parts of the United States. Major changes happening in the world suggest we have reached the time when doing so has become an imperative. Our survey data clearly indicates that the Canadian public appreciates that need.

Read our other Dispatches in this series of deeper dives into APF Canada's 2020 National Opinion Poll data:

Anti-Asian Racism in Canada: Where Do We Go from Here? Flashpoint Myanmar: Why the Coup, and Why Now? Will COVID-19 Cause the World – and Canada – to Forget about the Rohingya? Read more >

Why Learn Japanese or Korean?: A Motivational Study of Young Adults in Montreal Flashpoint Myanmar: Why the Coup, and Why Now? Election Watch Myanmar: A Renewed Mandate for the Returning Party Read more >