Through the Eyes of Asia Watch: A Mid-year Review

The first half of 2020 has proven to be a dynamic period in the Asia Pacific and for Canada-Asia Pacific relations. APF Canada has tracked much of this dynamism in Asia Watch, our tri-weekly, uniquely Canadian analytical newsletter on trends, newsmakers, and events in the Asia Pacific. Between January and July, APF Canada’s research analysts produced 86 issues of Asia Watch for a total of 344 stories that have covered everything from Trump’s visit to India and the Taiwan elections to the emergence of and responses to COVID-19 and refugee issues.

From late March to late May, we pivoted Asia Watch to monitor Asia Pacific pandemic-related challenges, actions, and outcomes with reference back to Canada’s ongoing public health challenges. Stories featured responses by various economies, how countries and people in the region are affected, and best practices to help inform Canadian policy-makers and businesses. The Asia Pacific has been at the forefront of pandemic responses, recovery, and second waves, often one to three months ahead of Canada. Developments in the region have valuable lessons for Canada’s responses and recovery initiatives. While this once-in-a-century pandemic has been the newsmaker of the year, Asia Watch, like the Asia Pacific, is more than COVID. Below we recap some of the trends and findings from the last seven months of Asia Watch coverage.

Human rights issues have been a recurring topic of coverage in Asia Watch since January. We’ve tracked new reports that suggested that up to 80,000 Uyghur minority people from China’s Xinjiang region had been displaced and forced to work in factories across China that were supplying multinational companies (MNCs) such as Nike, Bombardier, Microsoft, and Apple. There were also reports of human rights abuses in factories supplying MNCs in Bangladesh, Vietnam, Cambodia, and India. Human trafficking, meanwhile, was highlighted as an ongoing problem in Southeast Asia, particularly in Thailand, where approximately 1,800 victims were rescued in 2019.

The main news from the Philippines over the past six months has revolved around the passing of the anti-terrorism act and President Rodrigo Duterte’s attempts to control public opinion by clamping down on media and shutting down the country’s largest media conglomerate, ABS-CBN. These moves came amidst growing scrutiny over President Duterte’s controversial war on drugs and the subsequent massive civilian deaths. 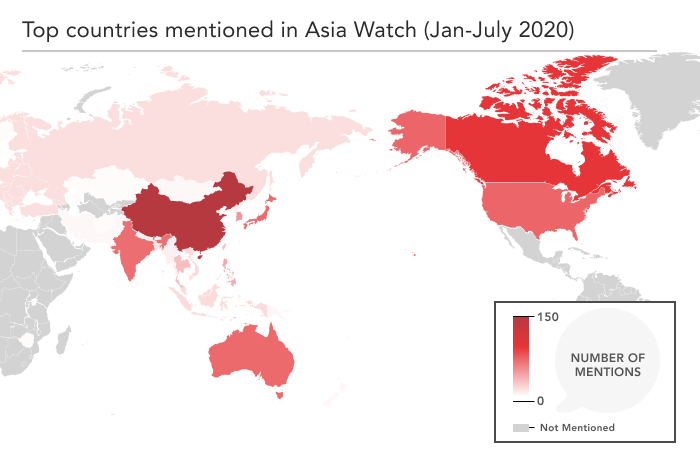 Following a year of downward spiralling relations, Japan’s Prime Minister Abe called for decisive rapprochement with South Korea in January. Despite this, the death of two ‘comfort women’ in March reminded us that the legacy of Japanese military sexual slavery during the Second World War continues to strain relations between the two countries.

COVID-19 pandemic responses have highlighted human rights issues in the region. Asia Watch stories have tracked how less privileged populations are at a higher risk of contracting and spreading the virus and suffering from related economic hardships. This was the case for Indigenous communities in Australia, New Zealand, Japan and throughout Southeast Asia. Meanwhile, refugee camps housing some of the most vulnerable populations in the Asia Pacific, such as the Rohingya Muslim-minority, faced the ongoing spectre of COVID-19 outbreaks due to overcrowding and a shortage of medical supplies and resources. Countries like Bangladesh and Malaysia that were previously accepting Rohingya refugees began closing their doors as they focused on their domestic pandemic-related battles.

Challenges in the democratic world

Events and newsmakers related to public trust in government and social stability among democratic countries and regions have also been featured front-and-centre in Asia Watch this year.

For example, Hong Kong’s democratic challenges garnered global attention as protesters took to the streets en masse over the government’s violations of Hong Kongers’ rights and freedom. Although COVID-19 put a damper on the protests in March, protesters resumed activities in April. Hong Kong also faced recession and political instability challenges in May. The launch of the National Security Law in late June further hindered public trust in the government. It also helped set the stage for potential mass emigration to other democratic countries, including Canada. As details of the law came out, several countries and MNCs began to question what it meant for their presence or operation in the ‘special administrative region.’ Some companies, like South Korea’s tech giant Naver, have already announced their relocation to Singapore.

India has also seen its share of protests this year. In late February, violence broke out between Hindu and Muslim groups in New Delhi in response to the Indian Government’s new Citizenship Amendment Act (CAA) and threatening language from a politician in the pro-Hindu ruling party. The CAA is an exclusionary law that uses religion as a legal basis for granting citizenship in a country founded on secular principles. The protests caused severe property damage, dozens of deaths, and injured over 250 people in six days. Police arrested more than 600 individuals linked to the protests, but they also faced criticism for applying excessive force. Growing distrust of India’s government and police raises further challenges for India’s religious minorities.

In early June, the Black Lives Matter (BLM) movement in the U.S. highlighted police brutality against African Americans. The BLM movement saw significant supportive responses in parts of the Asia Pacific addressing local racism and police brutality, notably in Australia, South Korea, and Japan. Other Asian countries, such as China, noted how the BLM movement’s underlining causes – notably racism and police brutality – undermine the U.S.’s moral authority as a human rights protector and guarantor of democracy. All of this a reminder that trust in government may, as Taiwan’s Digital Minister Audrey Tang suggested in an APF Canada webinar, comes when governments first trust the people and ensure transparency.

Heightening tensions in the Asia Pacific

While COVID-19 may have predominated news cycles for most of the first half of 2020, the pandemic did little to ease ongoing tensions in the Asia Pacific.

Taiwan re-elected incumbent President Tsai Ing-Wen in January. She and her Democratic Progressive Party continued emphasizing the island’s commitment to democratic values, a process that is irking China. The World Health Organization’s (WHO) repeated exclusion of Taiwan meant that it might have missed out on receiving time-sensitive information regarding the pandemic. But Taiwan took the news of the novel coronavirus seriously. It initiated early and aggressive whole-of-government actions to limit adverse health and economic effects among its population, activities ripe with lessons learned and best practices.

Nor did COVID forestall ongoing tensions in the East China Sea between China and Japan or in the South China Sea between China and Indonesia, Vietnam, and the Philippines. The pandemic did calm a variety of insurgencies in the region. We noted that the Communist Party of the Philippines declared a ceasefire with government forces to limit the interference of pandemic-related medical, health, and economic assistance. And India mulled a ceasefire with armed Maoists. On the other hand, Pakistan seems to have used the pandemic as a means to crack down with its quarantine operations in separatist regions. At the same time, insurgents in Thailand and West Papua targeted government COVID-related meetings and response programs. A disputed portion of the long India-China border also erupted in violence in June, resulting in 20 Indian soldiers’ deaths and an unconfirmed number of Chinese military casualties, the first time border clashes in the region have resulted in fatalities since 1975. 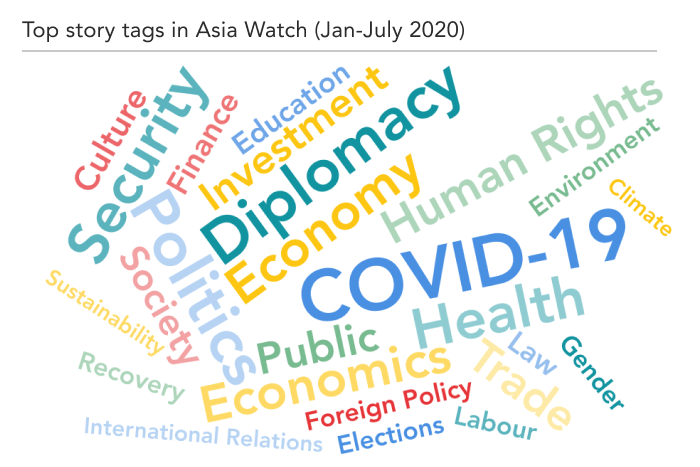 COVID has highlighted weaknesses in global value chains. And when companies in China shut down due to quarantines and the country put limits on or delayed exports citing its national interests, risks associated with an overreliance on China became more visible. India, Vietnam, Thailand, Taiwan, and Japan have all made increased moves to attract foreign direct investment (FDI), particularly in technology industries, and to encourage companies to relocate out of China. What this movement means for relations with China remains to be seen. But in the case of Australia-China relations, COVID-related issues are the latest complicator in a heightening rhetorical tit-for-tat. Australia has gone so far as to update its strategic outlook for the region, and China has announced an 80 per cent tariff on barley and issued a travel advisory following a wave of racist attacks against Chinese in Australia and Australia’s push for an inquiry into the origin of COVID-19 at the World Health Assembly.

Australia’s hardening stance toward China aside, the U.S. has continued to be the leading player trying to urge the world away from Chinese influence this year. In addition to the ongoing quid-pro-quo U.S.-China trade war, the U.S., Japan, and the EU have proposed reforms to the WTO’s rules on subsidies to address subsidies Beijing provides to strategic industries not currently covered by the WTO.

The environment, sustainability, and the pandemic

The Asia Pacific has experienced a wide variety of environmental disasters so far this year, many of which were covered in Asia Watch. Climate change likely exacerbated some of these disasters, including the severity of Australian bushfires and locusts swarms in India and Pakistan.

On the flip side, the pandemic-induced manufacturing slowdown helped clear the skies and improve air quality in many cities. But the need for many developing countries in the region to fast track post-COVID economic recovery could mean that the region will see a resurgence and growth of coal-fired power plants and a subsequent drop in air quality. At the same time, India, Japan, and South Korea have proposed sustainable business strategies to be more environmentally conscious in their post-COVID recoveries. China leaped forward with its single-use plastic ban announcement in January, which aimed to stop production by the end of 2020. Thailand, Indonesia, and Vietnam have followed suit by proposing to cut down on single-use plastic in the coming years. And yet, the need for single-use personal protective equipment could test the viability of these strategies. China also announced positive moves in the animal sector, proposing a ten-year fishing ban on the Yangtze River and announcing future revisions to existing wild animal protection laws due to a COVID backlash related to the consumption of wild animal meats.

Debates continue around these pandemic-induced environmental and sustainability initiatives and whether they will spark medium to long-term green energy transitions before pandemic subsidies end. At the very least, they offer signs of hope.

Canada’s position in an unpredictable world

Looking back at this year’s Asia Watch stories demonstrates the dynamism of the Asia Pacific and the importance of Canada’s relations with the region. Asia Watch remains committed to helping Canadian governments, businesses, the public, and students keep abreast of what was, pre-COVID at least, the world’s fastest-growing economic region, and home to more than half of the world’s population. In the months ahead, we will continue to highlight how Canada and Canadians are engaging Asia and why the region matters so much to our country’s future. Our newsletter and related products, including APF Canada’s Mapping the Asia Pacific’s COVID-19 Response project, are valuable tools that will help inform future policymaking, Asia Pacific engagement strategies, and building a future of Asia competent Canadians. While we cannot predict the future, we can help ensure that Canadians have the tools and information they need to make the best possible decisions for engaging Asia. 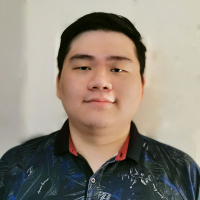 Dennis Fang is a summer research student at the Asia Pacific Foundation of Canada and a recent BA graduate from the University of British Columbia with a major in political science and a minor in economics. 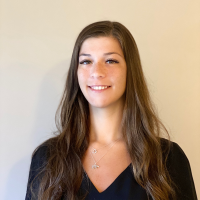 Marie Macdonald is a summer research student at the Asia Pacific Foundation of Canada and in her fourth year of Interdisciplinary Studies at the University of British Columbia.