A shipping container that processes waste and plant materials into green energy that can run engines and provide electricity to rural and marginalized communities may sound too good to be true—but it is not. It’s exactly what the staff at BioCube, a company located in Coquitlam British Columbia, are able to do. The advantage of their mini-refinery is that it can be easily shipped by road, air or sea, can operate independently of the electric grid, and can make high-quality diesel out of a variety of plant materials. Some of the by-products of the production process can even be used in fertilizer, as combustion fuel, or in anaerobic digesters.

The idea for developing a BioCube was seeded in the Asia Pacific. In the port town of Kimbe, in Papua New Guinea, two of BioCube’s co-founders were on the local wharves watching dock workers load palm oil bunches into a ship destined for Singapore, where the oil would be refined and returned back to PNG as processed fuel. This started them thinking about finding a way to process the palm seed locally, which would cut cost considerably.

Working with manufacturing partners CBVL Robotics in Coquitlam, B.C., the first model was launched in 2014. Since that time, BioCube has been gradually expanding production to make units available for the global market. At present the company maintains a total of four machines in India, Australia, the Democratic Republic of Congo, and Canada.

Asia, as Director Peter Wilken explains, presents a variety of opportunities and challenges for BioCube. The Asian opportunity is immense due to the ever-increasing demand for energy in the region.

“[Asia has] a huge emerging energy-hungry middle class; something like 60 per cent of the future growth of the planet [will be] entirely driven by China and India,” says Wilken. “The desire for everyone to have air conditioning, fridges, automobiles, all of these major things . . . is driving the consumption of energy. We are never going to see a time where people don’t want more energy . . . population, especially in Asia, is a major driver of that.” 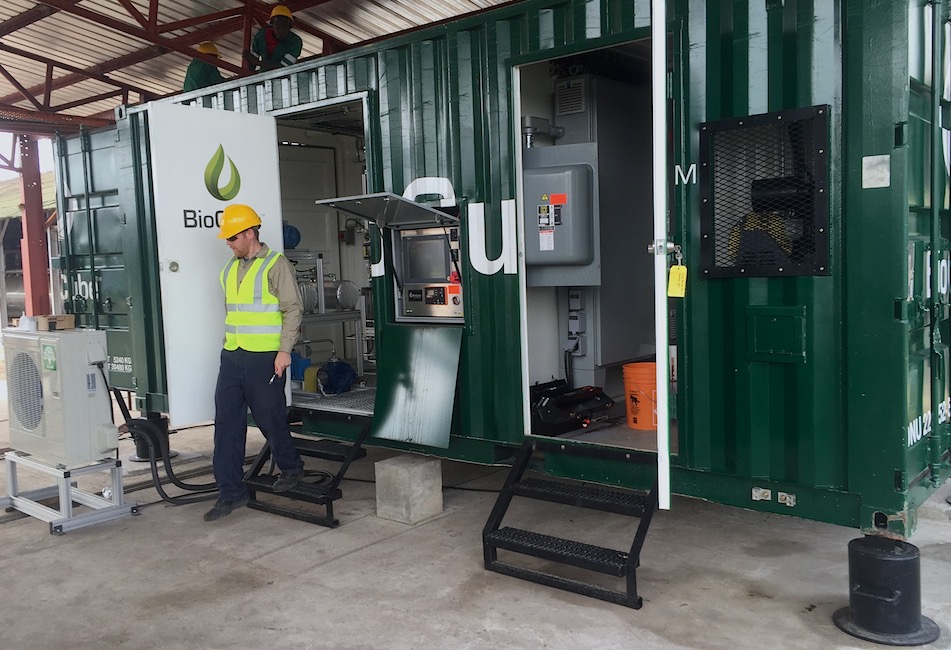 Technicians run the final tests on a BioCube waste-to-energy unit built within a portable shipping container.

For BioCube, African and Asian countries present a particularly attractive market because the vegetable plants and energy crops that their technology uses as feedstock grows throughout the region. As Wilken notes, “ the ability for Asia to be self-sustaining and to be independent in terms of liquid fuel is higher than anywhere else in the world.” Of course, for countries in the region, energy self-sufficiency is an attractive proposition as many are net importers of fossil fuels.

However, entering these markets has not been easy for BioCube. As Wilken recounts, it’s hard to get traction because “there are enormous forces beyond our control that are putting up barriers to this disruptive technology ever being seen or heard.”

Elaborating on these obstacles, he said the first challenge “include[s] macroeconomic factors like the low prices of oil: we launched our BioCube commercial model in 2014 – ironically coinciding with the collapse of oil prices. That brought down huge organizations . . . and it clearly affected us. To give you some examples: in Indonesia, we hear that the government is subsidizing industrial diesel – it costs 40 cents per litre. Nobody can or has any desire to produce an alternative when they believe that fossil fuel is going to be abundant and plentiful and to a large degree, free. It doesn’t make economic sense to produce clean renewable biodiesel when the cost of feedstock is higher than the subsidised price of fossil diesel available in the market. In Canada . . . in Alberta, it’s 50-55 cents per litre. It’s very low; cheaper than the cost of the waste feedstock materials that would be used to produce an alternative.”

The second challenge is the effect of government subsidies and regulations. According to Wilken, these mechanisms favour fossil fuels by about a 5:1 ratio. As he explains: “[We] simply can’t compete with that. The IMF recently suggested that fossil fuels were subsidized by US$5.37 trillion. That’s more than the world spends on healthcare.” While assistance is provided to biofuel producers, he adds, the form it takes favours big and centralized producers that are able to sign 10-year supply agreements and can hide the cost of their end product behind large-scale volume deals. Perversely, he argues, this biofuel is de facto extraordinarily expensive to produce and with none of the environmental benefits of the biodiesel the BioCube is able to provide.

The third challenge relates to the lack of real momentum toward adopting a low-carbon economy. As Wilken observes, “ everyone wants to buy into [it] but when does the revolution really start? Everyone speaks it, but it just isn’t followed through . . . what we stand for and what we would like to see is a total transparency where every subsidy is removed on renewables and fossil fuels. It would give the renewables a total advantage; that 5:1 differential for fossil fuels would be removed, [and] we would have an even playing field. But it’s a huge ask. We have to find different ways of being able to succeed, and that includes people, investors, customers with some vision and belief, and some long-term perspective that this is the right thing to do.”

A final challenge originates in a misperceived trade-off between food and fuel. Many argue that bio-diesel creates food shortages by diverting crops that provide staple foods into biofuel production. Wilken describes this argument as “probably the most damaging misperception.” The world, he argues, “produces enough food to feed itself; that’s not the issue: the issue is the inequitable distribution of it.”

By improving distribution, especially by consuming food within a close radius and improving community supply and independence, we become more equitable and efficient food producers, Wilken explains. “Twenty-five per cent of all the food produced globally either rots in trains after being produced, or never even gets that far into the market,” he says. This is particularly true in places like India that don’t have the infrastructure to distribute food efficiently. 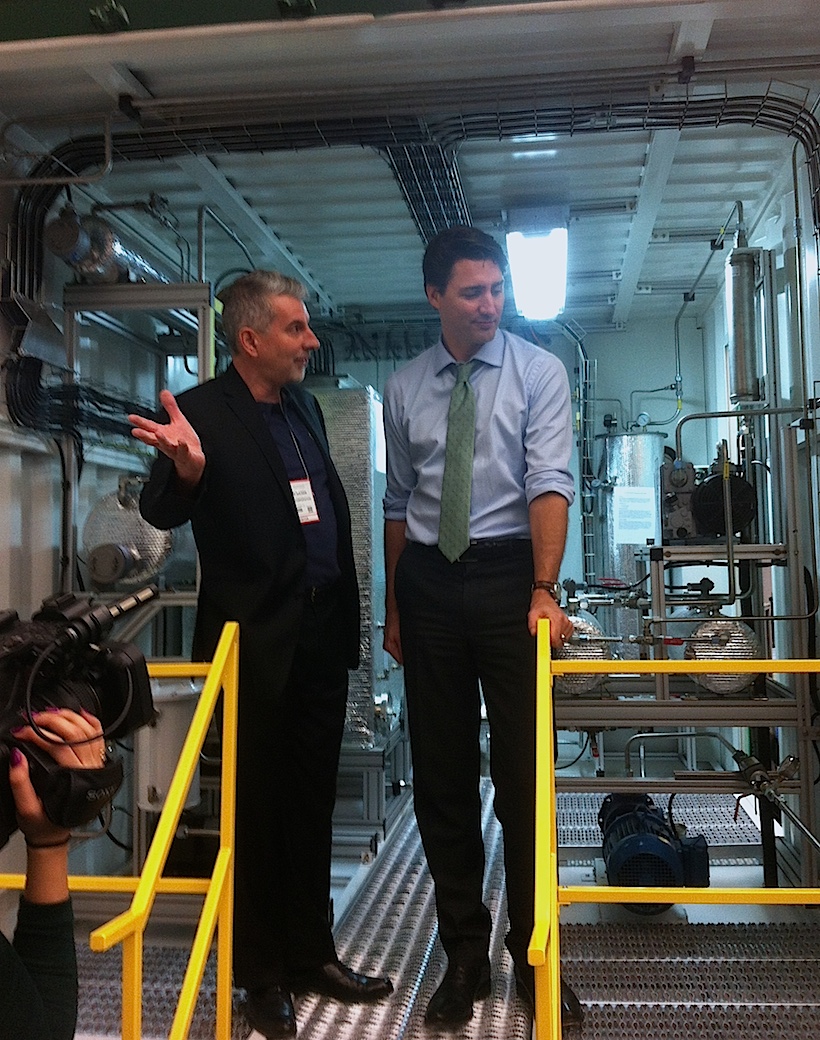 These challenges, however, are not insurmountable and there are ways that different government actors could help a company like BioCube grow its business in Asia. One way, Wilken proposes, is if regional or national governments or development organizations were able to provide funding to companies like his that are in the early stages of commercialization. The current dilemma is that those who want the technology – local government and rural people – don’t have the money to pay for it. As Wilken notes, the technology “brings value to the communities that are least likely able to afford to buy a BioCube: remote, rural [communities] in impoverished nations.”

While organizations like the Asia Development Bank do fund energy infrastructure, they are looking for projects that are in later stages of commercialization. As BioCube’s director explains, it’s a Catch-22 for companies like his.

“They want you to have 10 or 20 machines in the field that are functioning properly and the customers are happy [before] they will give you $50 million. Well, we need the $50 million to get the 20 units out there,” says Wilken.

On the other side of the spectrum, there is a range of government programs that provide grants – but they tend to support either not-for-profit enterprises, or companies that are pre-commercialization.

At present, given the extensive subsidies allotted fossil fuels, it’s very hard to make a purely economic case for BioCube. Fossil fuel alternatives are simply cheaper – and not enough people care enough about the environmental benefits to pay the premium for biodiesel it deserves. However, if governments also want to invest in providing jobs in rural communities and reducing carbon emissions, BioCube’s biodiesel solution starts to look more attractive. It’s a great example of how Canadian technology can help Asia promote sustainable and equitable economic growth.

Navigating India's Transportation Maze Review: A Fish out of Water in Taiwanese Society Increasing Rural Access to Healthcare: What Canada Can Learn from China