Why are Canadian Millennials More Favourable Toward Asia than Non-millennials?

Canada’s millennials (born between 1983 and 1999; aged 18 to 34 as of 2017) are the generation that grew up in an era of a rising Asia and who will form the largest block of the electorate in the 2019 Canadian federal election. Their views on Asia will inform the trajectory of Canada’s future engagement with this region.

The Asia Pacific Foundation of Canada’s 2017 National Opinion Poll, Canadian Millennial Views on Asia, highlighted that millennials – often stereotyped as being disengaged or apathetic to world affairs – have more open and diverse views about Asia than their elders. But what are the factors that make millennials and non-millennials’ (Canadians aged 35 or above) perceptions distinct?

As the first generation coming of age in the era of the internet and globalization, millennials’ perceptions of Asia have been shaped by a myriad of sources of information. Our poll data reveal millennials’ knowledge about Asia tends to come from mass media (including traditional media, websites, and social media), social networks and first-hand experiences (e.g., travel and work experiences). In contrast, non-millennials primarily rely on mass media, especially traditional media, to learn about Asia. Our analysis also suggests that, compared with non-millennials, millennials are less susceptible to the negative influence of mass media, and have more first-hand experiences in Asia and more frequent interactions with people from Asia – which allows millennials to form a more holistic, experience-based view of Asia. 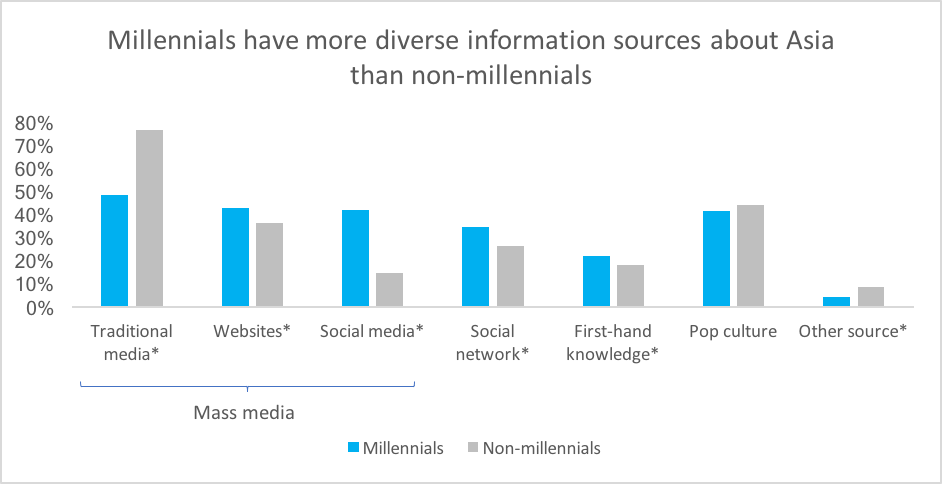 Q18: From the list below, please choose up to THREE sources through which you get most of your information about Asia.

Millennials are Less Susceptible to the Negative Influence of Mass Media

Mass media has played an important role in shaping public perceptions of Asia, often in a selective way by giving prominence to newsworthy stories. As one of our millennial interviewees noted, “news is like sensationalism… only the things that are breaking and important… get reported” (female, age 23).

The poll suggests that millennials’ perception of Asia is less likely to be influenced negatively by mass media, in comparison to non-millennials. In the poll, we asked people to recall information about Asia that they read/heard from the mass media in the past three months. Millennials are more likely to recall positive messages, while the majority of non-millennials recall negative messages. Moreover, non-millennials’ feelings toward Asia seem to be more responsive to what they see in the mass media – those who recall neutral or positive information about Asia give a favourability rating of Asia 11% higher than those who recall negative messages. In contrast, the gap among millennials is marginal. First-hand experiences and socialization, as discussed below, may help explain the different mass media influences for the two groups. 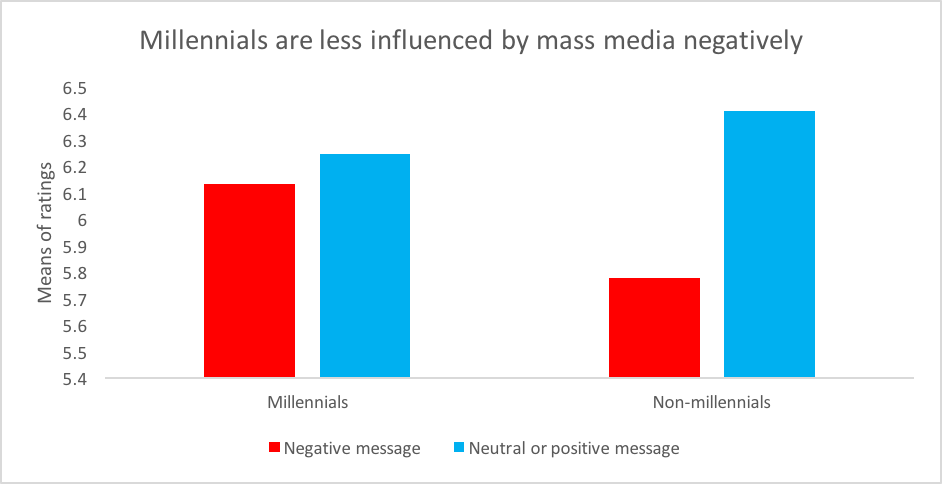 Q23: Recall what you have seen, heard or read over the past three months about Asia-related events, issues or people in the mass media (e.g., social media, radio, TV, movies); would you say most of the messages you received about Asia are positive, negative, or neutral?

Note: Percentages reporting “No view” and “Prefer not to say” not shown. 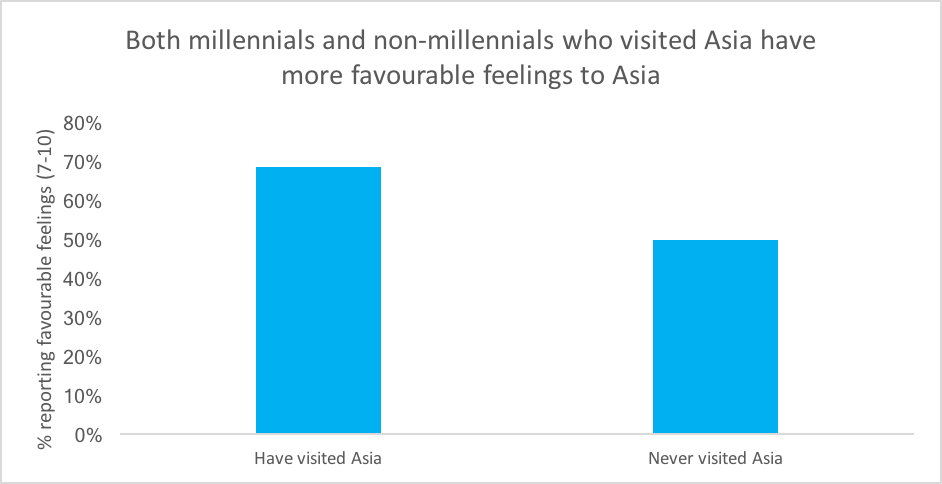 Q17: When was the last time you visited Asia for family, work, study, tourism, or other reasons?

Note: Percentages reporting “No view” and “Prefer not to say” not shown.

Travel experiences expose people to the diverse populations, cultures, and societies in Asia. Such grounded experiences not only advance their understanding of Asia but, more importantly, may change their pre-existing stereotypes or prejudices about the region. Our millennial interviewees who travelled to Asia appreciated such experiences:

Taking the flight and going there was the major jump in how I saw Asia. I went to Hong Kong. I mostly spent my time in Malaysia. I’ve been to Singapore and South Korea. I had this homogenous view of Asia… [Now] I really realize that they are global centres, they have people coming from all over the place; I had a very one-sided general view of Asia.” (Male, age 27)

“And then my other thing that has changed my perception a lot was I spent 10 days in Indonesia and then I met someone who had a friend there. So then her friend took me around in Indonesia. And you think that Indonesia has the largest population of Muslims in the world. So, before I went there, I thought that they are really conservative, very religious. And when I got there, my friends were talking relationships, and dating, and [were] more open to that than actual Singaporeans were, which I was very surprised about – the kind of like freedom, like, because these are all college-age students, but they kind of roam around the streets and they are on motorbikes. I think that has really shaped my idea of Asians being more complex than they first appeared.” (Female, age 23)

Socialization with People from Asia Informs Millennials’ Perception of Asia 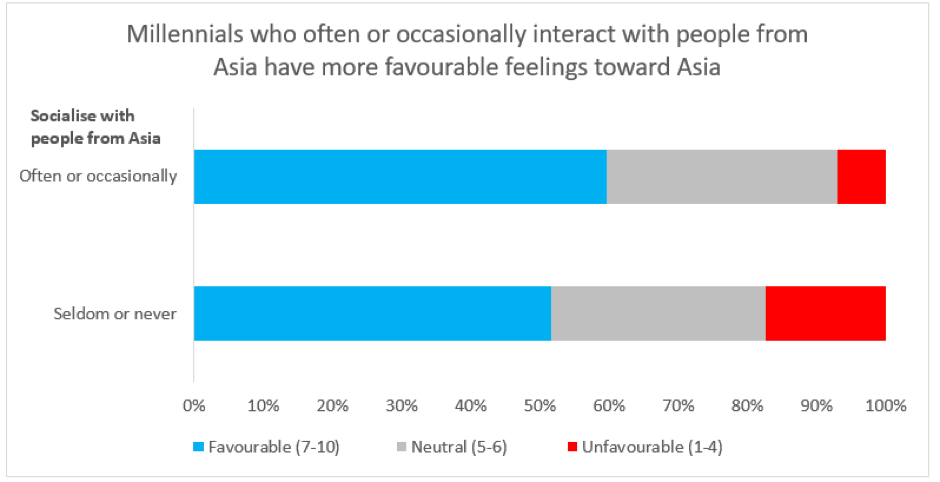 Q19: How often do you socialize with people who are from Asia (i.e., international students, immigrants, people born in Asia)?

Note: Percentages reporting “No view” and “Don’t know” not shown.

A myriad of factors has shaped Canadian millennials’ views on Asia. Compared with older generations, they grew up while Asia was rising, and in a digitized and globalized world where various sources of information could be easily accessed. They are exposed to the diversity and dynamics of Asian cultures and societies through grounded experiences and social networking. They are also less likely to be influenced negatively by the mass media. As a result, millennials tend to see Asia differently from their elders.

Our findings highlight that exposure to and engagement with Asia in different ways are important in building up Canadian millennials’ favourable sentiment toward Asia. It’s such positivity about Asia that drives young people to learn more about Asia and improve their Asia-related skill sets. The poll reveals a strong desire among millennials to learn more about this region. If Canada is going to make our future generations Asia-ready, it will bode well to provide more opportunities for cultural exchanges and mutual conversations, and for young Canadians to pursue grounded experiences through work, study, or travel. 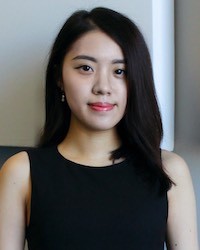 Ka Po Kong is a former junior research fellow with the Asia Pacific Foundation of Canada. She is currently a student of Sociology at the University of B.C.

Despite National Polling Results, Canadian Shouldn’t be Dismissive of Asian Investment A Difference of Opinion: Canadian Provincial Views on Asia Are Francophones and Anglophones so Different in Their Views on Asia? Read more >