A Difference of Opinion: Canadian Provincial Views on Asia

Canadian regionalism, or differing views and positions across the country, is part of the fabric that makes Canada, Canada. The roots of these regional divergences grew out of the country's history and they are formalized in the Constitution. Accordingly, provinces and Indigenous peoples have rights to act on their views in a number of areas ranging from education and health to international engagement, regardless of whether they differ or are congruent with the national line. Understanding these nuances is essential for informing policy making and Asia-related strategies. APF Canada's National Opinion Poll is one tool that shows common trends in national opinion and regional and provincial differences on how Canadians view Asia.

Broadly, the 2018 National Opinion Poll results show that all provinces appear to hold similar views in a few areas, including:

• Support for provincial policies to promote Canadian access to Asian markets;
• Awareness of the importance of trade with Asia; and,
• Positive attitudes toward immigration from Asia.

British Columbians are most likely to see Canada as part of the Asia Pacific region, while those from Manitoba and la belle province are least likely to see Canada's connection. This may be no surprise, after all, B.C is Canada's gateway to the Pacific, is home to the highest percentage of Asian visual minorities and Vancouver is dubbed the most Asian city in the world outside of Asia. In contrast, Quebec has a comparatively low percentage of its population identifying as Asian visual minorities (similar percentage to PEI and Nova Scotia) and despite being home to the sixth largest Indigenous population in the country maintains a strong francophone identity. But a province's percentage of Asian population may have little to do with it identifying as part of the Asia Pacific. Manitoba, for example, has a percentage Asian minority (13.1%) just below the national average (14.5%) but holds similar views to Quebec on Canada's Asia Pacific identity. 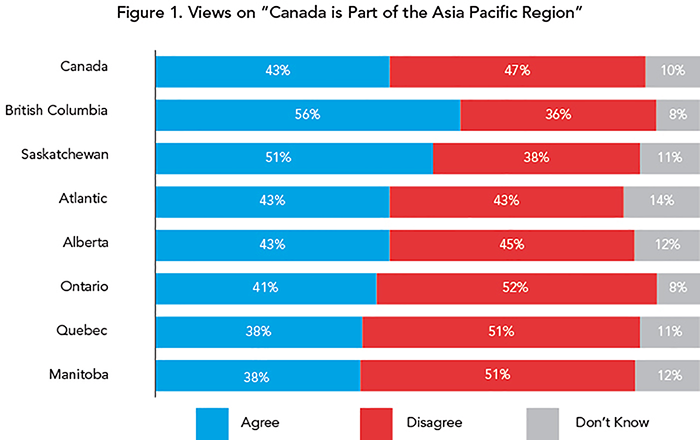 Energy and the Environment

With the recent posturing between Alberta and B.C. over pipelines it may not be surprising that the survey results show that out of all the provinces Alberta is the least likely to hold the view that environmental risks related to oil/gas transportation through pipelines carry more weight than economic benefits. But it is Quebec, not B.C. that lies on the other end of the spectrum, being the most likely to see such risks. The other provinces lie in between with Ontario holding closer views with B.C. and Quebec, and Saskatchewan and the Atlantic more in line with Alberta. Manitoba is the most divided on this matter. 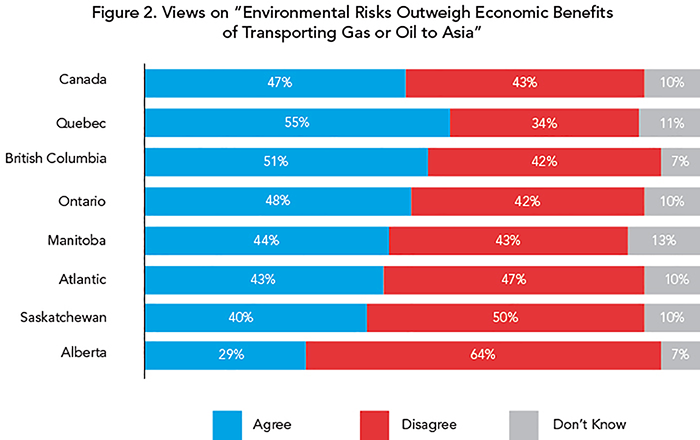 On support for diversifying energy markets by exporting to Asia we can lump the provinces into three groups: Alberta with overwhelming support; Saskatchewan, the Atlantic and Ontario with slightly above average support; and Quebec, Manitoba and British Columbia showing the least support and most opposition. Notably, Alberta, Saskatchewan and the Atlantic are consistent in their views on matters about diversifying energy markets and environmental risks related to energy product transportation, whereas the majority support for market diversification in the other four provinces (B.C., Manitoba, Quebec, Ontario) stands in contrast to their concerns about potential environmental risks – this echoes their stronger views that Canada should invest more in promoting clean-tech in Asian markets. 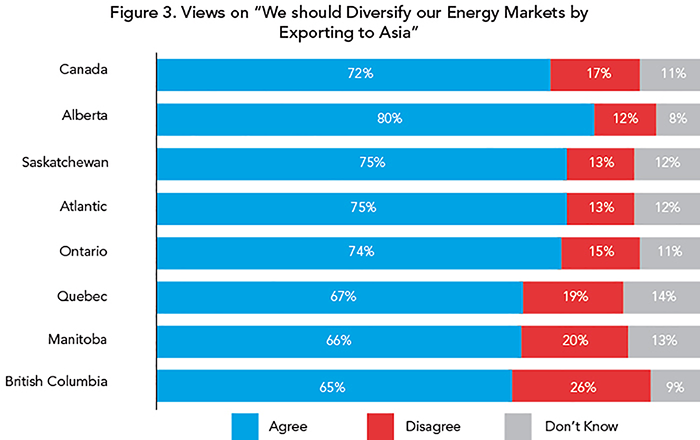 When asked about whether or not respondents support their provincial government encouraging more investment into their province the results showed that the two poles were B.C. being the least supportive and the Atlantic being the most supportive. This may seem counterintuitive, after all B.C. is the province with the most and longest standing provincial strategies geared toward engaging Asia, and has the largest number of provincial trade offices in the region, the highest percentage of trade with Asia, the largest number of twinning relationships with Asian counterparts, the largest inflow of tourists from Asia, and the second-largest Asian visible minority population. One untested hypothesis is that the less positive views of British Columbians on Asian investment may have to do with the dramatic increases of foreign direct investment from Asia in non-natural resource sectors in B.C. in 2016 and 2017. Comparatively, the Atlantic has only in the last few years taken a more proactive stance toward engaging Asia for trade diversification, immigration, and international students. 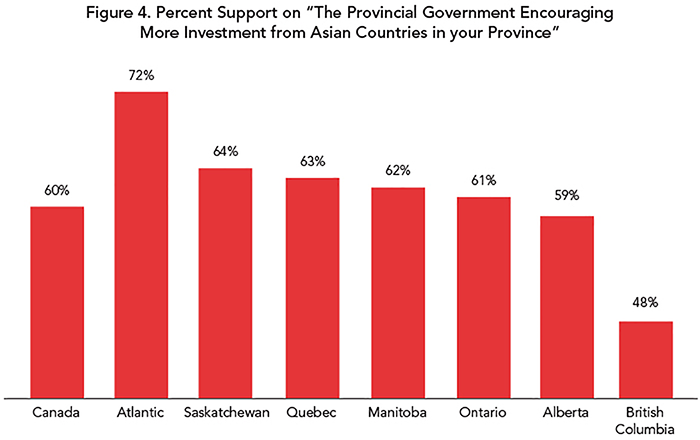 When it comes to attitudes toward a free trade agreement with China the poles lie in the far east and far west of the country. British Columbia is the main outlier expressing the least support (50%) and the most opposition (40%). All other provinces lie more closely together with Atlantic Canada leading with the highest support (65%) and least opposition (24%). 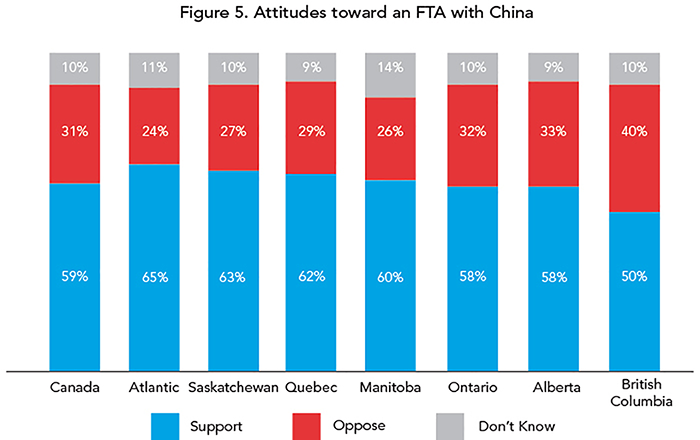 Poll results show significant divergence between the provinces when asked if they think progressive elements should be included in free trade agreements. Perceptions toward a potential FTA with India is representative of this trend with British Columbia and Quebec being most supportive and Manitoba and Alberta being the least supportive. 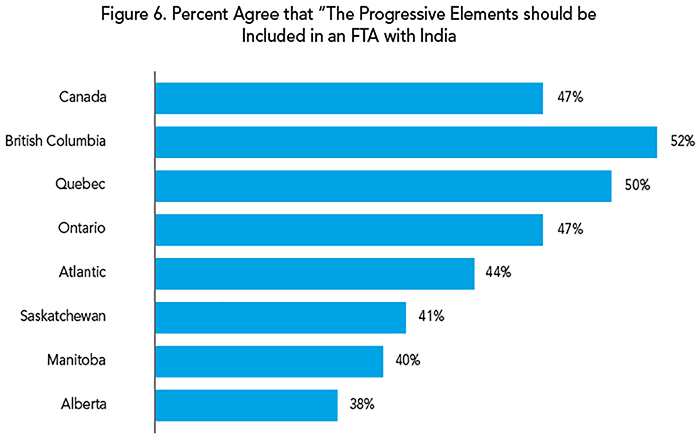 Among these provincial divergences there are rough grouping of regions. Alberta and the Atlantic provinces are most in line with favoring Asian investment and engagement, while British Columbia and Quebec are the most supportive of progressive and values centric trade and engagement, especially in relation to the environment. That leaves Saskatchewan, Manitoba and Ontario being the most moderate and closest in line to national trends.

In a federalist country like Canada where the Constitution provides for a high degree of provincial autonomy in international affairs, having a better idea of how views among the provinces differ can help inform the creation of evidence-based provincial Asia-related strategies. Seeing where there is congruence and divergence in opinion can also shed light on which issues the federal government may have nation-wide support and which would likely encounter push back, or see certain provinces act on their own if they are dissatisfied with federal activities.

One caveat with looking at provincial similarities and differences about perceptions on Asia, as with public opinion in general, is that it is difficult to explain causation – we can point to potential contributing factors but cannot yet concretely link these to opinions. And causal links in one province may be different in another. This is all the more reason to develop robust Canadian subnational foreign policy research and analysis.

Despite National Polling Results, Canadian Shouldn’t be Dismissive of Asian Investment Are Francophones and Anglophones so Different in Their Views on Asia? Canadian Views on Asia: The 2018 National Opinion Poll Blog Series Read more >