The COVID-19 pandemic has shut down much of international travel, but Canadian offices overseas continue to function as their staff have been there all along. These include provincial offices abroad, which represent the economic, cultural, educational, or institutional interests of a particular Canadian province. Seventy-four such offices span the globe, and three more will soon join their ranks: The Government of Saskatchewan announced in June that it would move forward with launching three new trade offices in Asia based in Tokyo, Singapore, and New Delhi. Despite COVID-related delays, the province expects the offices will open in 2021. Saskatchewan is looking to co-locate them within Canadian diplomatic missions and employ a combination of Canadian and local staff.

Provincial offices abroad are a stable, in-country presence representing their respective province’s interests. They boast a deep understanding of their target region, provide timely intelligence, promote the province’s image as a trade, investment, education, and tourism destination, and respond to a wide range of requests from both the province and their host region. This kind of support is especially valuable for small and medium-sized enterprises, which often struggle to maintain a sustained presence in a foreign market. As Canadian provinces seek to expand their exports beyond existing markets, and as COVID-19 continues to dampen trade and investment, such offices will take on higher importance.

Maintaining full-time offices abroad, however, requires substantial levels of financial commitment. Issues related to finances and operating on foreign soil can also give rise to inner-provincial political and public mistrust or skepticism. As we look forward to the opening of new provincial offices in Asia, it’s critical that we examine them more closely and facilitate a discussion around their role in engaging with Asia – their merits, limitations, and potential.

Overseas offices have been an integral part of Canadian provinces’ international strategy since 1970. Compared to central government offices’ broader efforts, provincial offices abroad can provide more in-depth and province-specific support. While provinces generally benefit from the Canada’ brand’ and the work and support from the Canadian Trade Commissioner Service (TCS), the promotion of Canadian products, firms, schools, and other offerings at the federal level does not always meet the specific goals of each province. Balancing provincial and national branding and interests is a delicate but crucial act.

Provinces other than British Columbia, Alberta, Saskatchewan, Ontario, and Quebec do not have representative offices abroad. Instead, they rely on the TCS, provincial and municipal trade missions, private consultants, trade fairs, and twinning agreements to address provincial international engagement strategies and needs. 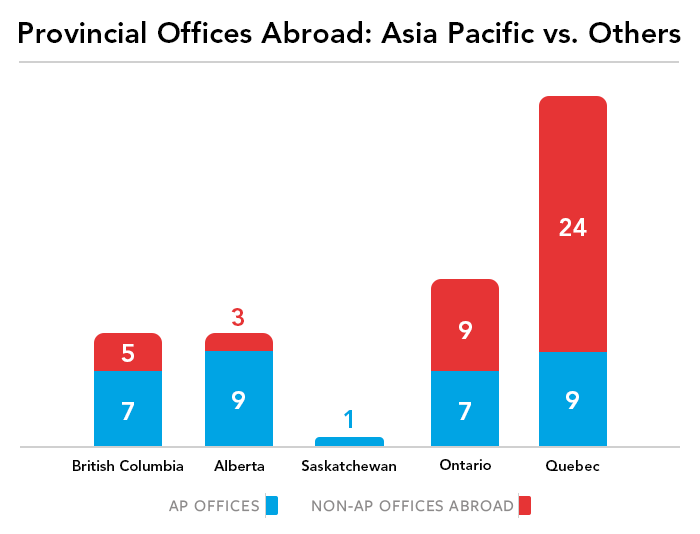 Canadian provinces have active representative offices in six Asian economies. Most are in mainland China, followed by India. China and India are also the only countries where provinces operate in multiple cities (seven cities in China and three cities in India). Most provincial offices are in East and South Asia; only two are in Southeast Asia. This is especially true after B.C. closed its three-year-old Jakarta office this year. To the extent that provinces seek to engage with Southeast Asian markets and societies, they do so through offices in Singapore. 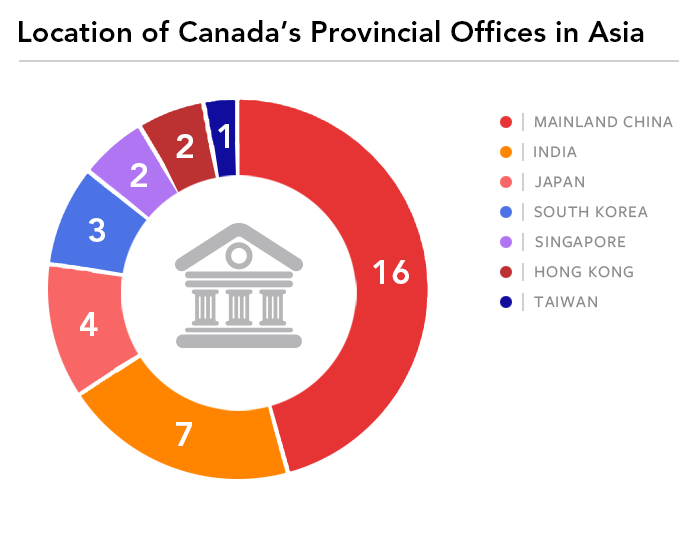 Two of Saskatchewan’s three new offices will be in Japan and Singapore, both signatories of the Comprehensive Partnership Agreement for a Trans-Pacific Partnership (CPTPP), reflecting the desire to expand beyond the province’s established markets in China and India. Given the passing of Hong Kong’s National Security Law, the Singapore office may become even more critical, as some companies exiting Hong Kong out of political and privacy concerns look to the city-state as an alternative location.

In addition to provincial affiliation and geographic location, the operation of provincial offices abroad is defined by three dimensions: office space, staff, and mandate.
A majority of provincial offices in Asia are co-located within Canadian embassies and consulates. When available, this arrangement typically (though not always) reduces costs compared to the alternative of renting office space in a separate building. It also avails the office of easier access to Global Affairs Canada (GAC) support and infrastructure, decreasing potential duplication of engagement efforts. Nevertheless, a separate office can still access federal resources such as its networks and support for public-facing events and can offer its own merits. One such potential plus is more flexibility in hiring staff, staff mobility, and the management of daily meetings and operations outside of embassy hours of operation. 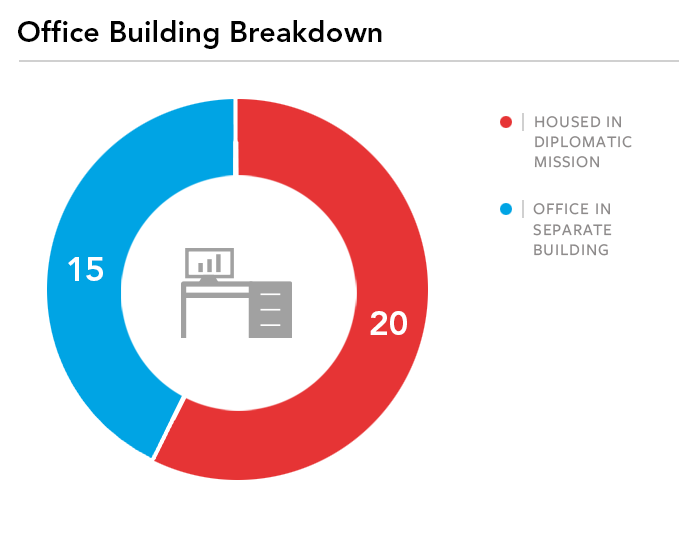 A majority of provincial offices employ both Canadian and locally hired employees, while some are staffed entirely by local employees. Hiring locally lowers costs and enables the office to find qualified personnel with the appropriate linguistic and cultural skills and knowledge of local markets, networks, and regulations. As Asian societies globalize – for example, with international students who studied in Canada returning home with developed transnational networks and as more Canadians moving to study and work abroad – it has become easier to find local candidates who have the additional advantage of knowing about Canada and the specific province they seek to represent. This development has somewhat lessened, though not eliminated, the need for provinces to post employees abroad.

The other aspect of staff composition is size. The size of provincial offices in Asia ranges from small shops with two employees to major operations spanning entire floors. Size matters because it corresponds directly with the scope of work the office can undertake as well as the level of funding it requires. An office of three, for example, may be sufficient to provide business and regulatory information to potential investors, but less able to attend a variety of sector-specific local functions to promote provincial companies and products. A small office may need to focus on tasks where the effects are immediate in a single sector.

Mandates are essential because they structure the work undertaken at overseas offices. Take Quebec and Alberta’s offices in Beijing, for example: Quebec has 10 staff, but two work exclusively in the field of public, cultural, and educational affairs. All of Alberta’s staff in Beijing, on the other hand, focus entirely on trade and investment. And even though it recently reduced its staff from nine to four positions, it has streamlined its work and reduced bureaucratic paperwork under the province’s new Investment Attraction Agency. These increased efficiencies will allow the province to increase international representation elsewhere. But as the case in B.C. has shown, updating mandates, moving offices, and transitioning staff can be challenging. 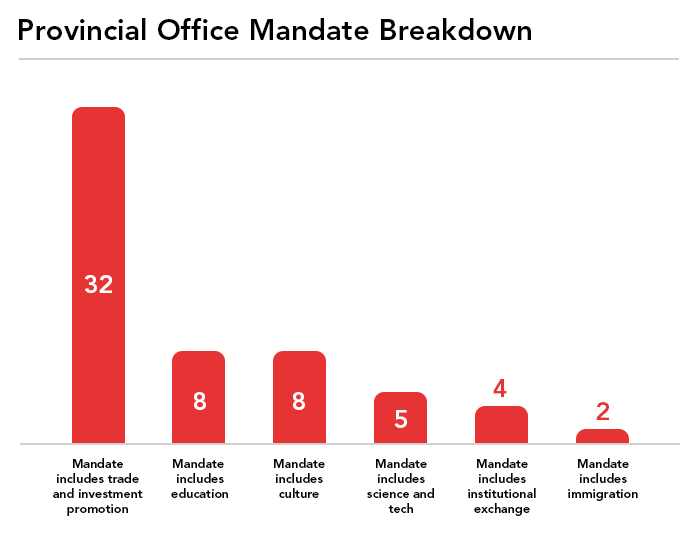 The prominence of commercial interests in Canada’s provincial representation in Asia reflects current provincial objectives, needs, and resources. But diversification to other areas of engagement should also be considered, especially given the importance of Canadian ‘soft power’ abroad and the contribution from education, research and immigration to Canada’s economy and society. While the offices’ core function can – and often should – remain engaging directly with businesses and clients, a broader spectrum of activities can further boost the on-the-ground presence of provinces, leading to greater visibility for their people, enterprises, and products. But the issue here returns to available resources and being able to show the timely impact of investment – something that tends to be harder to do outside of business and investment.

Overseas offices are vital in many provinces’ international engagement strategies. Opening overseas offices comes with a mid- to long-term commitment to maintain a physical in-country presence. Brick-and-mortar offices with fixed rental and employment contracts are well-equipped to provide stable platforms of engagement and support. Much of the value of provincial offices overseas derives from their semi-permanent presence in a region and their ability to develop know-how and networks over time. That being so, past decisions, whether on location, space, staff, or mandate, may occasionally require review and updating if they no longer make sense due to shifting diplomatic, political, and market trends. At the same time, frequent changes or opening and closing of provincial offices abroad may inadvertently negate their most significant advantages.

To conclude, we highlight four observations.

First, separating political and civil servant appointments in provincial offices may reduce the risk of trade and investment efforts getting caught up in partisan politics. Doing so may also help increase the longevity of overseas initiatives, which can otherwise be prone to changing political winds.

Second, provincial offices abroad need to be a part of province-wide engagement strategies. Such strategies are critical for mid-to-long-term planning in the context of Asia Pacific regional dynamics and trends, the structure of supply and value chains, and technological innovations. Only a few provinces had Asia Pacific strategies or strategies that explicitly mentioned the region at the time of writing. There is a significant variation across the provinces and territories on how this is done. For example, B.C. became the first province to produce a series of Asia Pacific-specific engagement strategies between 2007 and 2015, but they are now mostly out of date.  And Saskatchewan’s Growth Plan helps set the path for the province’s international engagement, which includes its three new offices in Asia. Strategies in other provinces with offices in Asia usually incorporate Asia related-issues less specifically. Alberta’s Economic Development and Trade annual reports, for example, highlight its provincial offices as part of its long-term economic strategy, though the strategy isn’t specific to Asia. Regardless of the type of strategy – Asia Pacific-specific, including Asia to a degree, or having a country-specific strategy (such as the 2016 Partnering for Success: The Nova Scotia-China Engagement Strategy), periodically stopping to take stock and incorporate updates can help ensure that the provincial offices meet the needs and interests of a province and take into account the ever-changing dynamics in the Asia Pacific.

Third, regular media engagement and internal reviews can help communicate the importance of work carried out by provincial offices abroad, improve public and government confidence in their operation, and create opportunities to cut costs or improve efficiency. Media releases and social media campaigns help raise public and business awareness of the offices and their activities and how they might play a role in a specific company’s growth plans. Reviews, on the other hand, help identify incongruencies between an office’s mandate and its operations. For instance, a review may reveal that an office isn’t adequately staffed to carry out its work, or it may find that sending employees from Canada is redundant and costly when local professionals are available to conduct the same tasks as competently. Without such reviews, provincial offices risk public and political dissatisfaction when results fail to match expectations.

We offer these first three observations based on the understanding – backed by our research on the multitude of ways that provincial offices are run – that provinces’ presence in Asia and worldwide can, with proper structuring, planning and reviewing, be resilient and stable without succumbing to rigidity.

Our fourth, and final point, is broader: Provincial offices in Asia offer insights into federal-provincial relations and the uniqueness of Canada’s identity abroad. They also provide the potential for harnessing the constitutionally-granted rights of provinces to engage internationally for the betterment of the country. Typically, the work of provincial offices address areas where federal support is deemed lacking. Provinces generally tend to engage more with international partners when they feel dissatisfied with federal policy. But rather than viewing provincial international engagement and overseas offices as an aberration or a sign of national disunity, provincial relations in the Asia Pacific have the potential to help ramp up and strengthen Canada’s presence in the region, be it for supporting trade and investment, building resilient supply chains, or simply investing in Canadians as globally-minded citizens.

Toward a Canadian Twinning Strategy: Lessons from South Korea Virtual Trade Missions: A Post-COVID Reality COVID and the Classroom: Lessons on Reopening from Asia Read more >