COVID and the Classroom: Lessons on Reopening from Asia

Schools are among the most challenging places to operate during a pandemic, and reopening them is often complicated and contentious. Reopening schools is not only an education decision but also an essential step towards economic recovery as it increases productivity for parents of school-age children. In Canada, the provinces of British Columbia, Prince Edward Island, and Manitoba have opted for partial school reopenings. Quebec’s Ministry of Education has decided to fully reopen that province’s public schools, except in Montreal. Other provinces are keeping schools closed until September. In addition to physical distancing measures such as rearranging tables and putting down tape to direct foot traffic, key aspects of school reopening plans in Canada include voluntary attendance and enabling schools to keep the number of students in each class down while ensuring families that most need help are prioritized.

Such measures, however, don’t seem to be enough. By the end of May, Quebec had detected at least 41 new confirmed cases of COVID-19 among its students and teachers, all within two weeks of reopening its schools. And come September, schools across Canada will face the difficult task of following public health requirements while welcoming more students into classrooms for prolonged periods. Provinces like Manitoba have begun to prepare for a possible reopening with full attendance, but students, parents, and educators across the country are asking for more clarity.

Canada isn’t alone in facing these challenges, and some countries have encountered them earlier, particularly in Asia. South Korea, Japan, and China, which dealt with the COVID-19 outbreak before Canada, have all had to manage mandatory school reopenings with varying degrees of success. By looking at these countries’ experiences, decision-makers in Canada may find insights that can guide them toward a safer reopening process.

Amidst new COVID-19 outbreaks in Seoul, South Korea reopened schools for grade 12 students on May 20. Grades 1, 2, 11, and Kindergarten began in-person classes on May 27, and the remaining students went back to school on June 8. The decision was made by the Ministry of Education and applicable to all schools across the country. The initial reopening date was set for May 13 but was postponed after an outbreak in Seoul’s Itaewon district. In response to that outbreak, the Ministry of Education (MOE) and local health authorities conducted epidemiological investigations targeting two groups regardless of symptoms: teachers and students who visited the Itaewon area within two weeks of the outbreak, and individuals who had been in physical contact with confirmed cases linked to the outbreak. In total, 932 people were tested in connection with the Itaewon outbreak. In another instance, after a student tested positive for COVID-19 in an Incheon high school that had reopened, all 463 members of the school were tested, and the school was closed again for two weeks to prevent another outbreak. 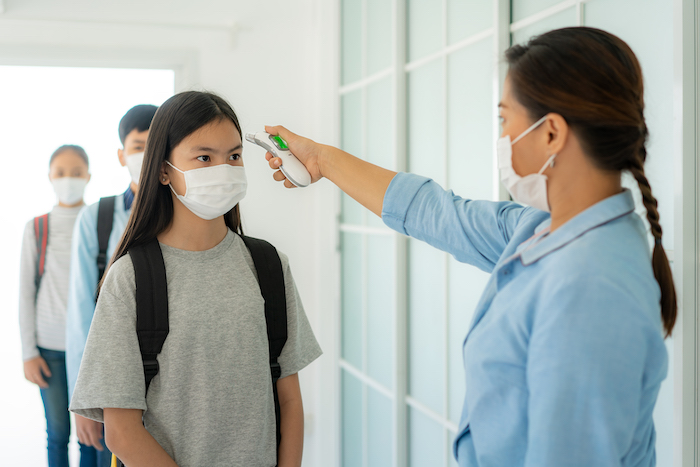 In addition to responding to outbreaks with aggressive testing, Korea’s MOE has also developed guidelines for daily monitoring. While temperature checks at school gates are now commonplace in many countries, the MOE consulted with medical experts and designed a health survey to be filled out by each student at the start of each school day. The survey covers body temperature, COVID-19 symptoms, travel history of the student and the family, and whether another household member is under home quarantine. After reviewing the survey, the school instructs each student on whether they can enter the facility.

Despite these measures, some schools have closed after reopening, especially in areas where clusters of COVID-19 cases have been identified. As of June 29, only 36 schools in South Korea remain closed, down from more than 500 in early June.

With the last state of emergency lifted in Tokyo and Hokkaido on May 25, most schools in Japan have now resumed operations. According to a government survey, 96 per cent of all schools across Japan had reopened by June 1.

The decision to reopen schools in Japan fell on prefectures, which are the first level of subnational administrative division in Japan. Central to Japan’s school reopening plan is a set of guidelines on standardized measures required of schools and local governments published on March 24 by the Ministry of Education, Culture, Sports, Science and Technology (MEXT). The guidelines allow schools in areas where infections are slowing and areas with no infections to reopen. Schools in largely COVID-free prefectures such as Aomori and Tottori have been able to reopen much earlier than others. There are 47 prefectures in total across Japan, making for nimble decision-making on when to reopen schools.

Not only are schools reopening at different times in Japan, but they are also operating differently, as prefectures have published their own reopening guidelines. While schools in some prefectures are planning to resume normal operations with full-sized classes and regular schedules, others have developed more graduated plans. In the harder-hit prefectures of Tokyo, Saitama, and Kanagawa, schools start with a much shorter school day - as short as two hours - so that students in different grades can come in at different times. In the case of Kanagawa, high-school students will go to school twice a week for three hours each time after June 8, every weekday for three hours each time after June 29, and every weekday for six hours after the summer vacation that ends August 31.

Having seen the number of new COVID-19 cases slowed to a trickle, schools in China gradually started to reopen after mid-April. Municipal governments decide when to reopen schools, usually after cities report no domestic infection for 14 consecutive days. Similar to South Korea, in many Chinese cities, graduating middle- and high-school students facing exam pressure were the first to return in late March, followed by other students.

The Chinese Ministry of Education published different school operation guidelines for kindergartens, elementary and middle schools, and high schools, addressing different organizational structures and students in different age groups. Each guideline is a lengthy document providing detailed instructions to school staff, parents, and students, covering everything from correctly wearing and taking off masks to dealing with mental distress.  Mandatory check-ups and cleanings are stipulated down to the hour, and sample forms are provided to help keep a written record. Students returning are greeted by the ‘COVID-19 First Class,’ a video tutorial created by the Ministry of Education on how to practice safeguard measures in schools. 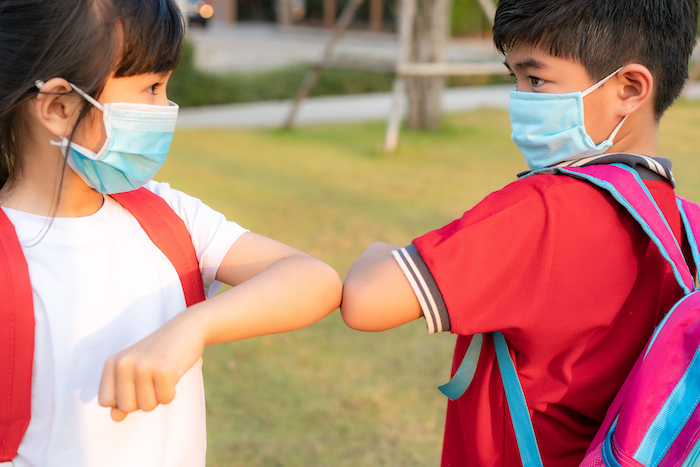 Schools across China also implemented the ‘test-room lunch,’ where cafeterias are set up like an exam room with students eating at their individual tables. Each grade is assigned a staggered timetable for lunch, and students get a bento box instead of lining up at the standard cafeteria counter. Personal utensils are also encouraged.

Like South Korea, the process of school reopening has seen setbacks in China, with over 50 schools in Beijing shutting doors again after a chain of outbreaks emerged there in mid-June.

In reopening schools, South Korea adopted a national strategy while Japan and China granted more agency to local governments. The three countries also assigned different weights to different aspects of COVID response in schools. Shared practices make up the bulk of measures in all three countries, including national guidelines, temperature checks at school gates, cancellation of certain activities and events, and mandatory mask-wearing. Even so, within these common practices are substantive differences that sometimes lead to different outcomes. While MEXT in Japan directed students not to wear masks during physical education classes, in China, two students died after intense physical exercise while wearing N95 masks, prompting the Ministry of Education to modify its guidelines to prohibit N95 masks in physical education classes. At the end of May, some schools in China allowed students to take off their masks after wearing them to school.

As Asian experiences demonstrate, reopening requires agility in policymaking. School reopening decisions and operational practices should be flexible and responsive to new case numbers, both regional and local, and led by new research about the virus. There is no wholesale solution when it comes to school reopening, but there are existing measures and practices that Canadian decision-makers can evaluate and adapt.

How China is Helping its Anxious University Graduates Find Jobs During COVID-19 Protecting Seniors During COVID-19: What Canada Can Learn From China VIFF Asia Review: Running Against the Tide