With global COVID-19 cases continuing to rise and another wave expected this fall and winter, it is clear that the virus is here to stay – and so are international travel restrictions. For this reason, international trade missions – trade promotion instruments that see delegations of government officials and businesspeople travel abroad to explore markets, develop networks, and make deals – have either been cancelled or postponed.

Trade missions are critical to Canada’s economic relations with Asia. Stakeholders vouch for the importance of personal meetings in the region, and a high volume of Canada-Asia missions take place each year. Since the need for trade and investment doesn’t fade in a pandemic-stricken economy, officials, businesses, and non-profits are actively seeking alternatives to face-to-face meetings with overseas partners. Enter virtual trade missions (VTMs) conducted online. But just as Zoom conferences are an imperfect replacement for personal meetings, so too are these remote-access trade missions. To better utilize VTMs to promote trade between Canada and the economies of the Asia Pacific, we urgently need a better understanding of how to best replicate the benefits of trade missions in a virtual setting.

The importance of Canada-Asia trade missions

Trade missions work. At the company level, trade missions, especially when combined with other trade promotion strategies such as counselling and industry fairs, help address information gaps between new markets and clients and ultimately enhance export performance. Surveys of trade mission participants also show that exploring market opportunities and experiencing other cultures may not instantly translate into business deals, but are critical in forging lasting relationships with longer-term economic benefits. At the government level, trade missions are an opportunity to engage with officials in other countries, spurring mutually-beneficial arrangements such as sister city relationships, friendship ports, and university partnerships.

Trade missions are at the heart of attracting new business investment into Canada and promoting export diversification. Asia Pacific Foundation of Canada (APF Canada) data on international trade missions conducted by federal, provincial, and municipal governments from 2010-2020 (YTD) shows that governments and businesses appreciate the opportunities these missions provide and, in recent years, have increased the diversity of their destinations and target sectors.

Provincially-led trade missions provide a glimpse into the sub-national dynamism of trade missions and international business engagement. Provinces use trade missions as tools to target and promote specific sectors and address interests not necessarily covered by the federal government. Close and convenient, the United States remains the destination for 75 per cent of Canadian exports and, as such, is heavily visited by provincial trade delegations. 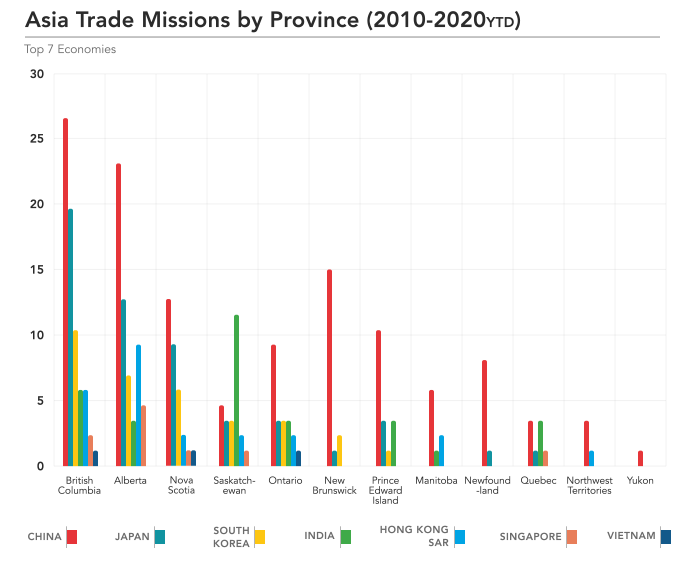 But excluding the U.S. from our APF Canada data, we found that more than 60 per cent of all provincially-led trade missions (261) went to countries in the Asia Pacific between 2010-20. As illustrated in the graph below, provinces exhibit different trade mission levels and preferred destinations. Much of Western Canada leads the way, with British Columbia having the most trade missions to Asia (71), followed by Alberta (54), and Saskatchewan (27). 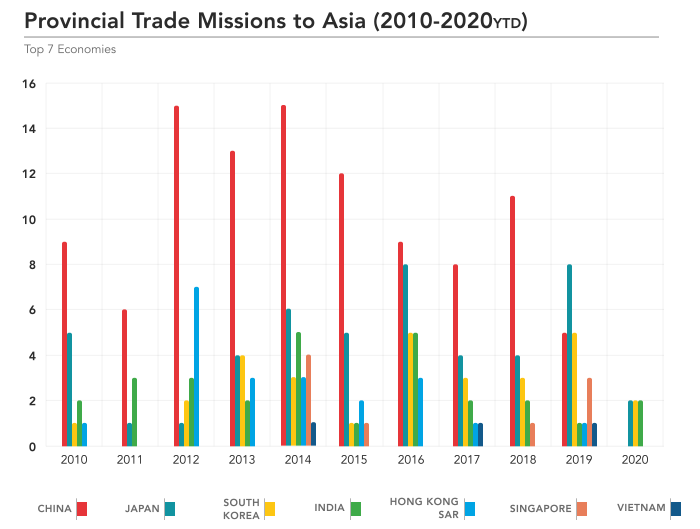 Provincial trade missions also appear reactive and adaptive to economic pressures. When oil prices dipped in 2015, for example, Alberta and Saskatchewan began quickly diversifying their trade missions away from energy and instead focused on sectors such as agriculture and innovation. For Alberta, which launched 23 missions focused at least in part on the energy sector between 2010-2015, there have only been six energy-focused missions after 2015.

For much of the past decade, China was the most popular destination for Canadian trade missions, but data from 2016 onwards shows a diversification towards countries like Japan, South Korea, and Vietnam, many of which are free-trade partners with Canada. Trade missions also appear to sway with political pressures. 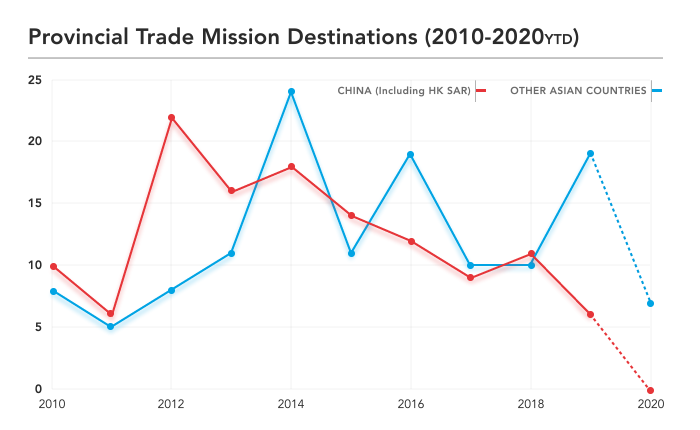 When Canada-China tensions increased in late 2018 and China stopped buying several Canadian exports, provincial governments began using trade missions to explore other markets in Asia, including Japan, South Korea, and India. Notably, missions to Japan and South Korea increased from seven in 2018 to 17 since 2019, while the number for China over the same period dropped from 11 to six.

Governments at all levels organizing trade missions are now facing the health- and travel-related constraints of COVID-19, and we have seen a drastic drop in trade mission volumes from 2019 to 2020. Traditional trade missions consist of government-to-business and business-to-business meetings, industry site visits, and market and sector presentations. They are often organized around large sectors or market-specific events such as trade shows and include cultural components ranging from theatre and food to visiting historical sites. The mix of formal and informal opportunities for business matches, relationship and capacity building, and cultural competency makes trade missions attractive to companies looking to add value to their ventures in diversified markets.

Some of what happens during traditional trade missions can be replicated through online platforms, and as work and business moves online during the pandemic, people have become more accustomed to video and online communication. Business conferences have become webinars; personal meetings now happen in virtual breakout rooms; and, site visits can be facilitated through new media technology.

But virtual trade missions will never replace the hands-on experience of visiting another country, and its businesses, factories, and people. Experiences like public transportation, walking the streets, and eating local foods are impossible to replicate accurately. And yet, with some effort, organizing and conducting effective virtual trade missions is possible, with two important considerations.

First, although online meetings have become commonplace, there is still a learning curve in effectively choosing and using the right platforms. What a business or individual is familiar with at home may not be the platform of choice in a destination market. Indeed, events and meetings often require a combination of platforms to effectively deliver group announcements, webinars, matchmaking, Q&As, and private communication. It is also important to identify digital platforms that can be easily used for pre-mission selection and planning, and then be seamlessly transitioned to support mission activities and post-mission follow-up. For these reasons, prior research and training on online platforms are a must. 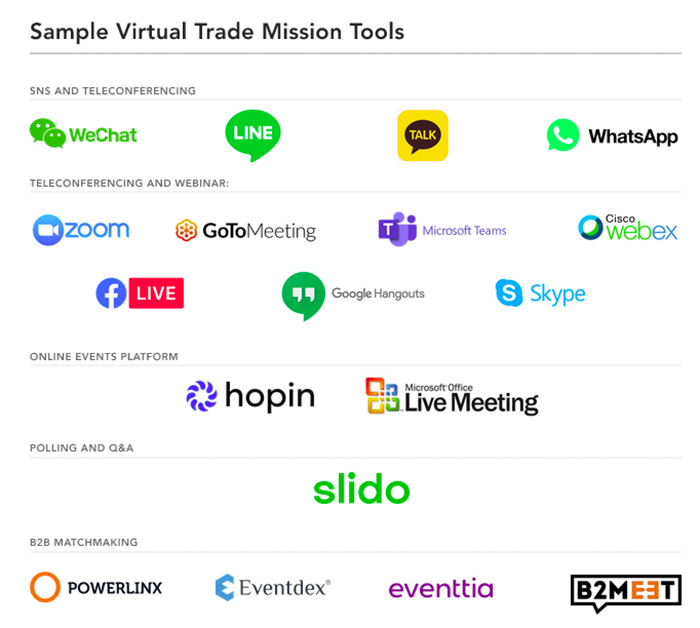 Second, scheduling is vital to the success of a virtual trade mission. Participants in a VTM typically operate in different time zones. Depending on the location in Canada and the Asia Pacific, this could mean accounting for time differences of between eight and 19 hours. Meanwhile, attention spans are generally shorter online than in a traditional business/conference setting, which, especially when combined with late nights and early mornings for some participants, means that sessions should be shortened to less than two hours. Organizers should also explore less conventional ways of keeping participants engaged, such as group activities and even games.

Despite these difficulties, VTMs can be a much more cost-effective and accessible option for small businesses that cannot afford the cost or time of extended stays in foreign countries. This decrease in cost and increase in accessibility, however, may not be best served by opening the flood gates to larger than normal levels of mission participants, where the quality of interactions with governments and foreign businesses could decrease. Still, VTMs can be leveraged for increased participation in ‘gated’ segments of the main event, as well as for a number of post-mission follow-on activities like audio/video recordings, sharing documents, and building networks beyond the smaller number of original delegation members.

If executed thoughtfully, VTMs do present an excellent opportunity to foster relations virtually and successfully. Curated virtual trade missions in specific sectors such as tech and agriculture, which can still conduct business despite COVID-19, may prove essential to helping Canada continue to diversify and expand its reach abroad. It is also important to note that investing in virtual missions now may pay off in the future as they will help set the stage for in-person trade missions post-COVID-19. Beyond online missions, other trade-related events and activities can also be successfully transitioned online, including trade fairs and permanent online communication forums.

There is no shortage of examples of governments and organizations around the world shifting toward virtual trade missions. The Toronto Region Board of Trade is currently ironing out details for virtual missions to China, Japan, and South Korea. APF Canada’s Women’s Business Missions to Asia initiative will also be going virtual for parts of its planned STEM and care economy focused mission to South Korea later this year.

A Case for Provincial Offices in Asia - and How to Make Them Better Toward a Canadian Twinning Strategy: Lessons from South Korea COVID and the Classroom: Lessons on Reopening from Asia Read more > 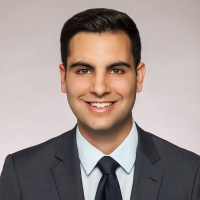 Robin Asgari is a second year law student at the Schulich School of Law at Dalhousie University and is currently a summer research student at the Asia Pacific Foundation of Canada.