In February 2021, Indian Finance Minister Nirmala Sitharaman announced the allocation of C$95.5B (Rs5,540 crore) for the 2021-2022 fiscal year to achieve the government’s goal of a “self-reliant” India and support the country’s economic recovery. [1] The push for self-reliance is evidenced by the budget’s focus on domestic growth. Sitharaman’s budget speech emphasized skill development, education, and infrastructure projects as the main paths to achieving self-reliance. Overall, the budget is divided into six major pillars: health and wellbeing, physical and financial capital and infrastructure, inclusive development, reinvigorating human capital, innovation and R&D, and, lastly, minimum government and maximum governance. The focus of this case study will be the pillars related to R&D, clean energy, and digitization initiatives.

The Union Budget 2021 plans to facilitate innovation and R&D through the establishment of a National Research Foundation (NRF). C$8.6B (Rs50,000 crore) has been allocated to create the NRF over the next five years. The aim of this “Glue Grant” is to promote cross-institution collaboration that will spur innovation and R&D. The current plans suggest that the NRF will be a formal institution used to connect and strengthen research institutions across nine major cities. The NRF will also encourage projects that are focused on areas that the government considers a priority.

The Indian government recognizes the importance of the renewable energy sector and has pledged C$172M (Rs1,000 crore) to the Solar Energy Corporation of India and an additional C$259M (Rs1,500 crore) to the Indian Renewable Energy Development Agency. In the 2015 Paris Climate Agreement, India agreed that by 2030 it would reduce greenhouse gas emissions by 33 per cent. A large-scale movement towards reliance on renewable energy would significantly increase India’s ability to meet this goal. The finance minister also announced that the National Hydrogen Energy Mission would be launched in the coming year, focused on developing green hydrogen energy, and the Ministry of New and Renewable Energy was allotted C$4.3M (Rs25 crore) to encourage the research and development of hydrogen technologies.

Finally, the budget identified two initiatives that will further India’s digitalization process. The first is an allocation of C$259M (Rs1,500 crore) to promote digital payments using financial incentives. In addition, the government plans to support fintech startups and provide them with access to a global market by establishing a fintech hub in Gandhinagar Gujarat International Finance Tec (GIFT) City, India’s first smart city. The hub is also expected to create up to 150,000 jobs and spur R&D and innovation in the fintech field. [2] 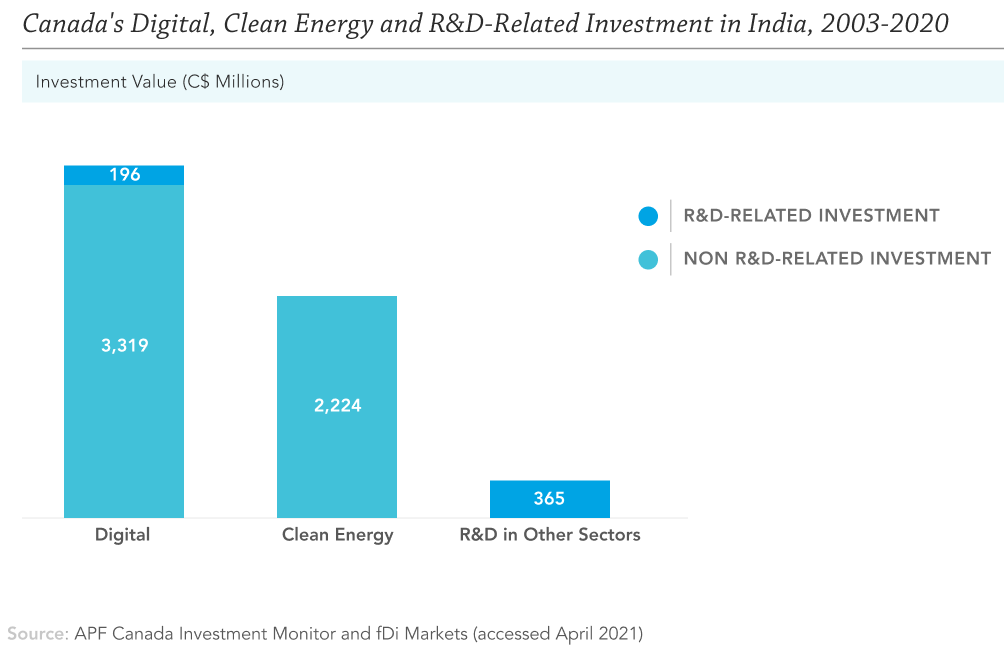 While the Indian government is focused on increasing the country’s self-reliance in 2021, the R&D, digital, and renewable energy sectors could provide opportunities for Canadian investors. India is already a popular destination for Canadian investment. Since 2003, investment in India has reached a total of C$32.8B through 260 transactions. This makes it the third-largest recipient of Canadian FDI, after Australia and China.

APF Canada’s Investment Monitor data suggests that the clean energy and digital industries are already sought after by Canadians, as the telecommunications and alternative electricity sectors are both in the top five sectors for Canadian investment. In total, the clean energy and digital industries have received C$2.2B and C$3.5B, respectively. Of the C$2.2B invested in India’s clean energy sector, C$1.9B has been invested in alternative electricity, and C$277M was invested in renewable energy equipment. Toronto-based SkyPower Global, a solar power development company, is responsible for the majority of the investment in alternative electricity, having invested C$848M to build and operate 200-megawatt solar energy projects in Telangana through two transactions, one in 2015 and the other in 2016.

Investments in the digital sector are more diverse, spanning the computer services, semiconductor, software, and telecommunications equipment industries. In the software sector, C$800M was invested through 39 transactions, the largest number of deals for any sector related to digital technology. However, the telecommunications equipment industry has received the largest total investment value, with C$2.5B invested between 2003 and 2020. The largest outward investment in India’s telecommunications sector was the C$2B acquisition of a telecommunications tower company by British Columbia Investment Management Corporation and Brookfield Infrastructure Partners. This transaction occurred in 2020, although there has been a fairly equal distribution of deals across all years since 2003.

Outside of the digital and clean energy industries, other sectors have also received R&D-related investments. C$561M worth of Canadian investments into India could be associated with R&D activities between 2003 and 2020 through 18 transactions. These investments are concentrated mainly in the biotechnology and pharmaceuticals sectors, with over C$157M invested in these two sectors via four deals. One notable transaction is a 2018 R&D-associated investment in the health-care sector. The Canadian pharmaceutical company Jamp Pharma Corporation invested C$46M to establish its biggest centre of excellence for R&D and manufacturing drugs in Hyderabad. The project is expected to create 2,000 jobs once the centre has been completed. [3]

India’s COVID-19 recovery plan could provide Canadians with more opportunities to invest, as the government plans to expand the fintech sector and give tech startups access to the global market through the establishment of a fintech hub. However, the emphasis in the budget on “self-reliance” might present a barrier to investment in industries that India wants to further develop domestically.

One example of this type of barrier is the Indian government’s decision to support the domestic production of solar panels and solar cells by increasing the duties on solar inverters and solar lanterns from the current five per cent to 20 per cent and 15 per cent, respectively. This will likely affect exports more than investment, though the general trend towards “self-reliance” may have a negative impact on India’s ability to integrate into global value chains. [4] The increase in emphasis on buying local could be concerning for foreign companies. This could have adverse effects on the investment environment, such as increased restrictions on market access. [5]

In addition, the results of recent polls suggest that the attitudes of Indians towards foreign investment have cooled in the last few years. A 2020 report by the Pew Research Centre found that there was a 13-percentage point decrease in support for the acquisition of domestic companies by foreign entities from 2014 to 2019. [6] The most recent data revealed that in 2019, 47 per cent of respondents said that they were opposed to foreign acquisitions. [7] While attitudes towards greenfield investments are more positive, the negative attitudes towards foreign acquisitions may pressure the government to further regulate the sale of domestic companies to foreign entities.

This is an excerpt from the Investment Monitor 2021: Report on Post-COVID Recovery and Foreign Direct Investment Between Canada and the Asia Pacific. For the full report, please click here. For case studies in other economies, please click below: