South Korea announced C$128.5B (KRW$114.1T) worth of government recovery programming as part of a plan termed the ‘Korean New Deal’ (KND) in July 2020. The KND is part of the South Korean government’s plan to accelerate South Korea’s transition towards an inclusive, green, and digital economy. According to President Moon Jae-In, the KND will transform South Korea from a “fast follower” into a “leading” economy.[1] To achieve this vision, the Korean New Deal is structured in three major pillars: the Digital New Deal, Green New Deal, and Stronger Safety Nets. Underneath these pillars, KND lays out nine focus areas and 28 specific projects to be implemented by 2025. Taken together, the Korean government hopes to generate more than 1.9 million jobs through KND programming.[2]

With C$97B (KRW$87.5) in funding, digital and green account for most of the KND programming. On digital, the focus is on a more robust integration of data, network, and artificial intelligence (DNA) throughout the Korean economy. Specifically, the government pledged to invest C$7.1B (KRW$6.4T) to develop a “data dam” that would enable and facilitate the collection, disclosure, and utilization of data throughout the economy.[3] To further reinforce Korea’s digital advantage, the government is investing C$16.4B (KRW$14.8T) to expand the integration of 5G and AI in the private sector through initiatives such as providing AI solution vouchers to SMEs.

The Green New Deal is another significant component of the KND. With C$48B (KRW$42.7T) in pledged investments, the South Korean government seeks to transition its economy towards carbon neutrality by 2050.[4] The Green New Deal promises to invest in greening Korea’s public infrastructures and expanding the use of sustainable and renewable energy throughout the economy. For instance, in one project, the government pledges to provide support for installing renewable energy equipment in 200,000 households.[5]

Lastly, the KND also lays out various programs across the three pillars to improve the economy’s R&D capabilities. In the digital realm, the South Korean government promises to support research and development in delivery systems which utilize robotics, internet of things (IoT), and big data. KND also strives to leapfrog South Korea’s research capacity in clean technologies. For instance, in one program, KND pledges to support the development of hydrogen technologies. KND further reinforces these R&D programs by committing C$1.2B (KRW$1.1T) to train 100,000 digital and 20,000 green talents by 2025.[6] 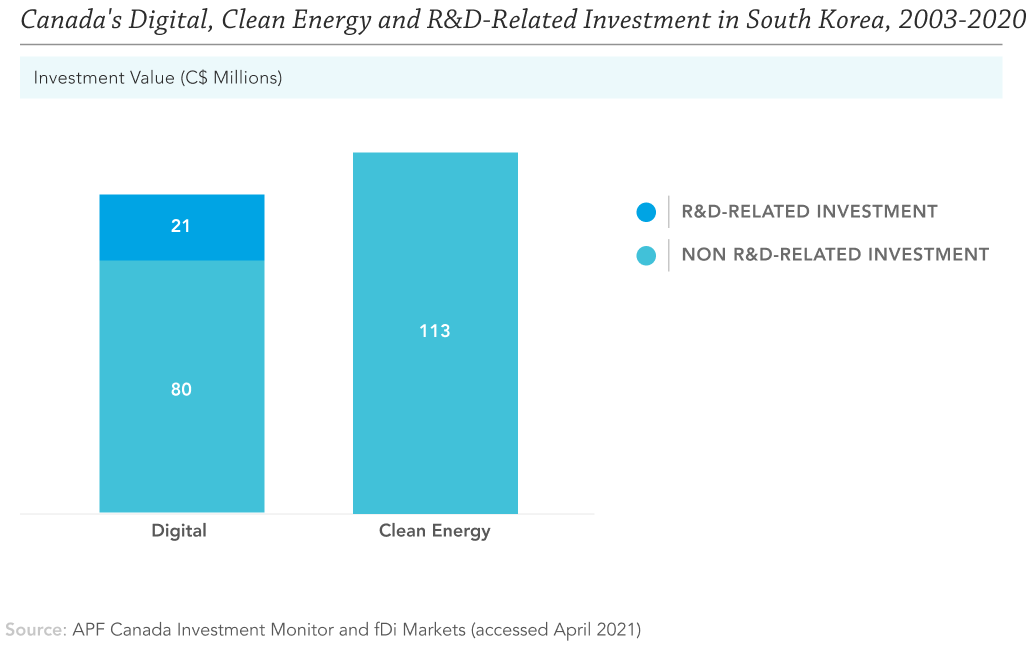 While KND could present substantial opportunities to Canadian digital, renewable, and R&D sectors, Canadian outbound investments to Korea remain limited in these high-growth sectors. From 2003 to 2020, Canadian companies invested C$5B into South Korea via 53 deals. Of the C$5B worth of Canadian investment in South Korea, the digital and clean energy sector only accounted for C$101M and C$113M, respectively. One notable transaction came in 2020 when NexOptic Technology Corp., a Vancouver-based artificial intelligence company, opened a new office in Seoul. In the clean energy realm, Kolon Hydrogenics, a joint venture between Kolon Water & Energy and the Mississauga-based Hydrogenics Corporation, invested C$113M to develop a 1-megawatt fuel cell power system in Seosan, a city located southwest of Seoul.

The APF Canada Investment Monitor also identified four Canadian R&D-related investments in South Korea amounting to C$21M. However, all identified R&D investments are in the digital sector. One notable transaction came in 2018 when the Montreal-based artificial intelligence firm Element AI invested an estimated C$2M to open a new office in Seoul. Element AI’s 2018 investment was associated with a research collaboration agreement with Shinhan Financial Group to incorporate AI forecasting technology in its investment advisory platform.[7]

While the KND could incentivize more significant Canadian investment to South Korea in the digital, clean energy, and R&D sectors, there remains potential barriers for Canadian companies to take advantage of KND-induced activities. Analysts have noted that KND’s primary objective is to leapfrog South Korea’s own domestic industries and to allow foreign participation may defeat such an objective.[8] In particular, some Korean firms are concerned that allowing foreign companies, which are perceived to be technologically superior, to bid for KND opportunities will threaten domestic players’ opportunity to take advantage of the stimulus package. Given KND’s policy objective and the potential public opposition to foreign participation, the South Korean government may favour domestic companies over foreign bidders in KND programs, impeding Canadian investment opportunities.

Furthermore, skepticism over foreign investment could heighten depending on the method of entry. According to a 2019 study by the Pew Research Center, while most South Korean respondents welcomed foreign greenfield investments, 71 per cent had a negative perception of foreign companies’ acquisition of Korean firms.[9] The public’s negative view of foreign purchases of Korean firms could pressure the Korean government to strengthen its regulations around foreign acquisitions, particularly in sectors that see a high level of government investment.

In fact, South Korea has been introducing more stringent measures to safeguard its own technological advantage and national security. Like many advanced economies, South Korean policymakers have been concerned about the leak of core technologies, which may undermine economic competitiveness and national security. While such concern predates the pandemic, policymakers may introduce more measures to safeguard emerging technologies in the digital and green sectors, which are expected to set the course for South Korea’s economic recovery. According to UNCTAD’s Investment Policy Monitor, South Korea recently amended the Enforcement Decree of the Foreign Investment Promotion Act in August 2020.[10] The amendment enables officials to request a review of foreign investments where there is a strong likelihood of leakage of core national technologies. These measures may add regulatory risks, or at least compliance cost, for Canadian companies intending to invest in KND-associated high-growth sectors.

This is an excerpt from the Investment Monitor 2021: Report on Post-COVID Recovery and Foreign Direct Investment Between Canada and the Asia Pacific. For the full report, please click here. For case studies in other economies, please click below: