Schooling During a Pandemic: Lessons from China and South Korea

After multiple delays in starting the new school semester due to the COVID-19 pandemic, South Korea has resumed school online. All students from Grade 1 to Grade 12 are now taking online classes. This unprecedented nation-wide program echoes a similar response in China, the pandemic’s ground zero, where a national remote learning program was launched on January 30.

The rapidly changing pandemic has laid bare digital divides that existed all along, and their effects on education are particularly devastating for students with limited or no internet access. In China, a country with vast regional inequalities, regional governments have mobilized telecom providers to boost internet connectivity – if only temporarily – for underserved families, particularly in rural areas. In South Korea, where cellular service reaches more of the population, the country’s ‘big three’ telecom companies have announced that they will waive data usage fees incurred while accessing online content from the Educational Broadcasting System (EBS), an educational broadcasting network that hosts the bulk of the country’s remote learning program.

Many students also lack smart devices appropriate for accessing educational content for long periods of time. In China, only 39.9 per cent of rural households have internet access through a computer. Officials have reported buying televisions with internet connectivity for some underprivileged families, though detailed statistics about coverage are unavailable. In South Korea, the Ministry of Education has made it clear that it has enough tablets and laptops in its possession to lend to the more than 220,000 students who lack them.

Moving lessons online robs teachers and students of the interactions that make up a large part of the classroom experience, creating new hurdles for lesson planning, teaching, and evaluation. During the early stages of China’s online initiative and South Korea’s pilot programs, educators in both countries tried to record or live-stream their own lessons online, leading to high levels of stress and fatigue, particularly for those less familiar with the technology.

During a video session with teachers tasked with helping their colleagues improve their online teaching skills, South Korea’s Minister of Education experienced something sure to happen again later: the connection suddenly went dead. Connectivity issues are common in any remote setting, but they become particularly glaring when servers come under the pressure of millions of new users. Both the Chinese and Korean governments have announced plans to gradually scale up server capacities for major education portals. In the case of China, when such portals continued to experience lags, the Ministry of Education asked schools in different regions to log on at different times in order to lower internet traffic during peak hours. In both China and South Korea, government-backed education portals have moved to carry grade-specific programming through terrestrial, cable, and Internet Protocol TV, which serves to both cover more students and divert traffic to alternative channels of content delivery. 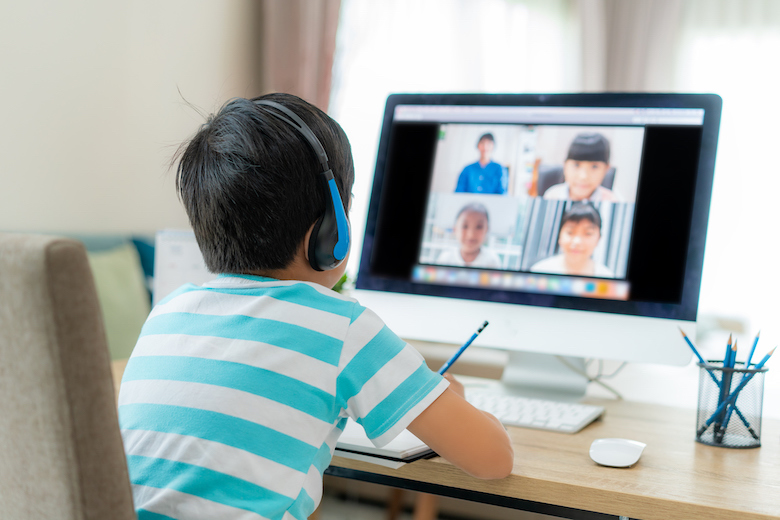 Experiences on the ground

Online education programs in China kept schooling going while students stayed at home to ‘flatten the curve.’ In South Korea, the plan is the same. For students, however, having classes online can not only be isolating but also physically exhausting: “My eyes became so tired at the end of the day,” complained one high-school student in China. “They couldn’t focus anymore.” This problem is especially acute for younger children, whose vision may still be developing. Learn-from-home arrangements in effect re-delegate the child-care function provided by schools to parents, creating additional hurdles for working parents with younger children, or children with special needs. Operating smart devices is also a concern, as one elementary school teacher in South Korea explained: “Many students in this area don’t have parents at home during the day, so even with the devices I’m worried that they won’t be able to operate them properly or stay focused.”

The education systems in China and South Korea, which feature competitive, nation-wide standardized testing in addition to more centralization, are not the same as in Canada. But as school boards across Canada navigate the new reality of COVID-19, they face many of the same issues identified in China and South Korea: students without internet access or smart devices, stressed-out teachers scrambling to call their students and record their own video clips, and parents who are unable to provide sufficient supervision for children learning at home.

As some students in China begin to go back to the classroom, and as students in South Korea begin their “first-in-history” online semester, it remains to be seen what type of new problems will surface and whether new solutions will emerge. For now, Canadian policy-makers and educators may find it useful to continue looking across the Pacific for insights.