This Dispatch is the fifth in a five-part series by our South Korea Election Watch, a team of young analysts tracking key developments and issues in South Korea’s March 9 presidential election. The series spotlights a segment of the population that most observers believe will play a decisive role in the outcome of the election: voters in their twenties and thirties. It looks at how they view their options in terms of the candidates and main political parties; how they might be impacted by the next administration’s economic policies; how the candidates are trying (or not) to appeal simultaneously to both young feminists and ‘anti-feminists’; their generation’s diverging views on inter-Korean relations; and how the ‘China factor’ has become more complex for them than for their parents and grandparents.

Although the Olympic Games are supposed to be an occasion for global unity, this year’s opening ceremony in Beijing provoked an outcry on South Korean social media. The offending incident was a performance featuring China’s 56 officially recognized minorities. One performer, representing China’s Korean minority, was wearing a hanbok, a piece of traditional Korean attire. What made the episode so controversial was that from the perspective of many South Koreans, it was an attempt by China to claim a cherished Korean cultural symbol as its own.

The intensity of South Koreans’ reactions would probably be unsurprising for those who have followed the trajectory of China-South Korea relations in recent years. At the popular level, this relationship has been increasingly defined, at least on the South Korean side, by accusations of cultural appropriation. Such accusations have become so heated and have so permeated the public mood that the two leading contenders for the March 9 Korean presidential election – Lee Jae-myung of the left-leaning Democratic Party of Korea (DPK) and Yoon Seok-yeol of the conservative People Power Party (PPP) – felt compelled to weigh in. Lee posted “Oppose cultural appropriation” on his Facebook page, and Yoon accused Beijing of attempting to “subjugate and incorporate Korean history into China.”

These views on China are backed up by recent polling. According to Pew Research, in 2015, only 37 per cent of Koreans had an unfavourable view of their much larger neighbour. By 2021, that number had climbed to 77 per cent. The rise in negativity toward China follows a trend seen in other advanced-economy democracies. 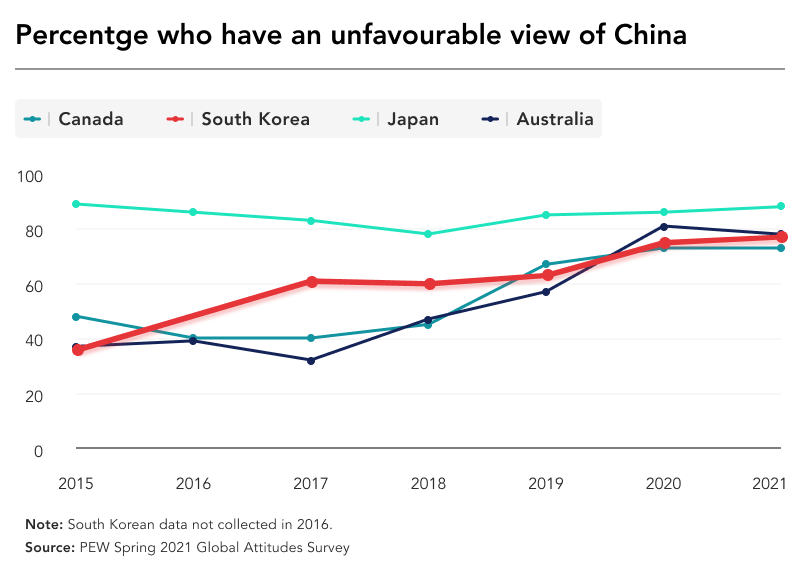 However, there are some particularities in the South Korean case that could be significant in the context of the upcoming election, as well as how the winner will manage this complex relationship once he begins his presidency, namely, that the ‘China factor’ is especially contentious among younger voters, who are expected to play a potentially decisive role in the election outcome this week.

A shrimp among whales

There is a Korean saying that “in a fight between whales, the shrimp is the one that gets hurt.” For South Korea, this lesson was learned the hard way in 2017. The previous year, amid growing tensions spurred by North Korea's ballistic and nuclear tests, Seoul deployed, as part of its alliance with the U.S., an anti-missile defence system called Terminal High Altitude Area Defense (THAAD). This deployment alarmed China, which claimed that THAAD’s forward-based mode radar could reach up to 2,000 km, covering the eastern half of Chinese territory. From China’s perspective, THAAD far exceeded its aim of protecting South Korea and threatened China’s national security. Although the Chinese government officially expressed its objection, deployment proceeded.

China – both the government and the public – retaliated economically. For example, the number of Chinese tourists declined by almost 50 per cent, from 8.6 million in 2016 to 4.17 million in 2017, after Chinese travel agencies said they would no longer be selling packages to South Korea. Two major South Korean carmakers in China, Hyundai and Kia Motors, also faced consumer boycotts in 2017, leading to a 52 per cent decrease in sales that year compared to the previous year.

But the retaliation did not stop there. Korean artists, products, companies, as well as business sectors such as restaurants and cinemas, were also impacted. China stopped airing Korean TV shows, and K-pop artists and actors were restricted from making appearances in the Chinese media. These actions seeped into the South Korean public mindset, reaching many younger people who might not otherwise have paid close attention to the official relationship between Seoul and Beijing.

In addition to having economic pain inflicted on them, many South Koreans view their relationship with China through the prism of the so-called ‘Northeast Project’ – a Chinese research effort since 2002 to find archeological evidence that Korean culture historically fell under the ‘Sinic’ (that is, Chinese) umbrella. This has included claims that the ancient Korean kingdom of Goguryeo was part of Chinese regional history. Since then, Chinese claims to many beloved Korean cultural items like kimchi were interpreted by many South Koreans as a kind of colonial attitude on the part of China.

In addition to cultural issues pervading South Koreans’ perceptions of China, there is another factor making South Korea an outlier: Age. According to another 14-country survey conducted by Pew Research in 2020, when unfavourability toward China is broken down by age category (18-29, 30-49, and 50+), South Korea is the only country where the youngest cohort is the most negative. For example, in Canada, there is a 24-point difference, with 59 per cent of 18-to-29-year-olds having unfavourable feelings toward China, compared to 83 per cent of those 50 and older. In the U.S., the range is similar – 56 per cent of younger people vs. 81 per cent of Americans 50 and older. 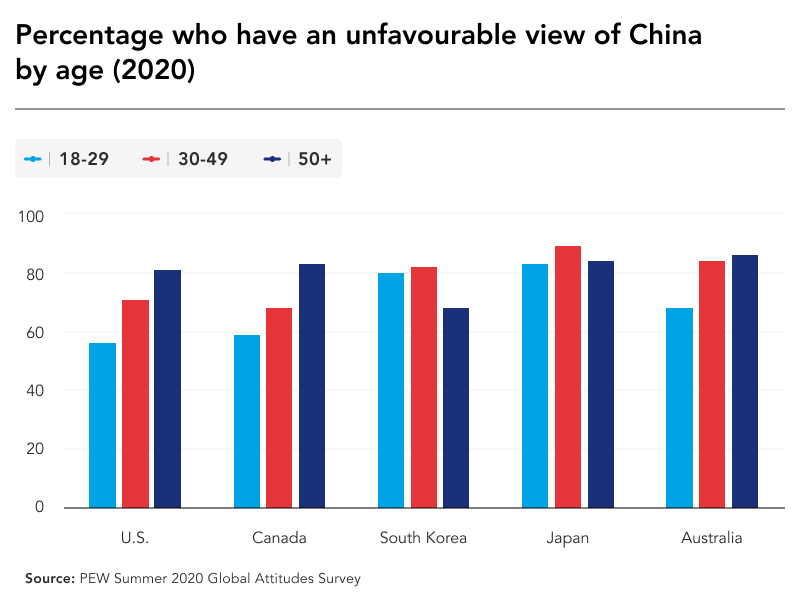 In South Korea, 68 per cent of the 50+ group is unfavourable towards China, but this jumps to 80 per cent of 18-to-29-year-olds, and even higher, to 82 per cent, among those aged 30-to-49. There are several explanations cited for this gap. One is the more recent episodes of economic retaliation and perceptions of cultural appropriation described above. But another is longer-term in nature. Unlike many older South Koreans, the younger generation grew up in a society in which liberal, democratic values were taken as a given. Like their counterparts in other democratic societies, South Korean youth have reacted negatively to reports of crackdowns on civil liberties and human rights abuses in China. Assuming that such inclinations do not dissipate with age, this shift could factor into the official bilateral relationship in the future.

What the candidates are saying about China

As in many other countries’ elections, foreign policy issues have not dominated the campaign trail in South Korea. However, Karl Friedhoff of the Chicago Council on Global Affairs has described the ‘China factor’ as perhaps the “biggest differentiator” between the two campaigns’ foreign policy platforms. Lee Jae-myung of the DPK said he plans to continue with current President Moon Jae-in’s policy of maintaining equal distance between Beijing and Washington. Yoon Seok-youl, meanwhile, has been more forthright in taking a tougher line on China, at least rhetorically.

But, as Friedhoff notes, no matter who the next president is, he will be constrained by the reality that China is a vital economic partner for South Korea, accounting for about one-quarter of both its exports and imports. And as has been argued elsewhere in this South Korean Election Watch dispatch series, the next president will need to be attentive to economic concerns and struggling South Koreans in their twenties and thirties. At the same time, according to polling released late last year by the Korean Institute for National Unification, South Koreans of all party and ideological affiliations identify China as the biggest threat to their country by wide margins, even while a small majority recognizes the need for “balanced diplomacy” between China and the U.S.

What this generational difference in South Koreans’ views on China might mean for the upcoming election is still unclear. But the complexification of younger voters’ views on China could make it more difficult for future presidents to balance the country’s competing interests and emotions in its relationship with its much larger neighbour. 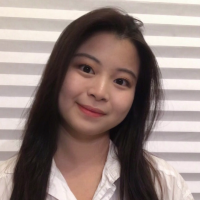 Lina Park is a Simon Fraser University student majoring in International Studies. She is interested in issues related to human rights as well as promoting a better understanding of Asian identity across the Asia Pacific.