This Dispatch is the fourth in a five-part series by our South Korea Election Watch, a team of young analysts tracking key developments and issues in South Korea’s March 9 presidential election. The series spotlights a segment of the population that most observers believe will play a decisive role in the outcome of the election: voters in their twenties and thirties. It looks at how they view their options in terms of the candidates and main political parties; how they might be impacted by the next administration’s economic policies; how the candidates are trying (or not) to appeal simultaneously to both young feminists and ‘anti-feminists’; their generation’s diverging views on inter-Korean relations; and how the ‘China factor’ has become more complex for them than for their parents and grandparents.

Despite the barrage of North Korean missile tests since January 5, South Korean President Moon Jae-in remains firm in his belief that a complete, sustainable peace on the Korean Peninsula is possible. In his five years in office, Moon has continuously pushed for a peace treaty to officially end the Korean War (an armistice brought armed conflict to an end in 1953). Less noticed, however, is his administration’s steps to improve relations with the North. Not only were there multiple summits with Moon’s counterpart, Kim Jong-un, in 2018, but recently, Moon attended the groundbreaking opening ceremony for the construction of the Donghae railway, a profoundly symbolic project connecting the roads and railways of the two Koreas.

While Moon has pledged to continue dialogue with Pyongyang in his remaining time in office, ultimately, it will be up to his successor, who will be chosen on March 9, to set the course for the next five years of inter-Korean relations. The impact of this new course will reach well beyond the Korean Peninsula, embroiling two of the world’s superpowers, the U.S. and China, as well as other major regional and international actors like Japan and the UN.

In previous South Korean elections, it has been the nature of campaigns to set high expectations for lasting improvement in inter-Korean relations, even if those promises ultimately fall short. But there is an important and often overlooked aspect of inter-Korean relations that could be relevant in the upcoming election: the shift in public attitudes toward North Korea and reunification, especially among younger South Koreans. This is also the group that is widely seen as having the voting power to decide the outcome of the upcoming election. In brief, South Koreans in their twenties and thirties have internalized new narratives on what it means to be Korean. These new narratives may mean that the two major candidates will need to update their messaging on both the feasibility and desirability of reunification as a long-term goal.

Moon’s pro-engagement approach to North Korea has been driven by three goals:

Moon has taken a step-by-step and comprehensive approach in pursuing these goals, using a combination of dialogue and, where appropriate, pressure through sanctions. He has also committed to improving inter-Korean relations and dealing with the North Korean nuclear threat simultaneously, and to laying the foundation for peaceful unification through mutually beneficial co-operation and building an inter-Korean community by expanding various inter-Korean exchanges.

While this approach has failed to halt North Korea’s nuclear program, it helped lessen tensions between the two Koreas. According to Time’s Charlie Campbell, “Moon helped guide the world back from the abyss,” extending an invitation to Kim Jong-un to send a North Korean delegate to the Pyeongchang Olympics, and famously meeting Kim at the DMZ, creating the basis for dialogue. This was followed by Kim holding three summits with Moon (2018), five with Chinese President Xi Jinping (2018-2019), one with Russian President Vladimir Putin (2019), and three with former U.S. President Donald Trump (2018-2019). Kim even gifted Moon a pair of snow-white Pungsan hunting dogs to symbolize the emerging harmony in the relationship.

These accomplishments should not be dismissed, given that Moon had to contend with several North Korean weapons tests, including three long-range ICBMs and a purported hydrogen bomb; Trump’s initial threats of “fire and fury”; and the lack of official dialogue between North and South since 2013. What have the two leading candidates to succeed Moon – Lee Jae-myung of Moon’s left-leaning Democratic Party of Korea (DPK) and Yoon Seok-youl of the conservative opposition People Power Party (PPP) – signalled about how they would continue or depart from this approach?

Continuity or change under the next president?

Lee Jae-myung has said that he plans on largely continuing the policies of Moon and his other more pro-engagement predecessors. This includes:

The DPK presidential hopeful has also pledged to take on the role of a proactive mediator to bridge the gap and address the “river of distrust” between North Korea and the U.S. He plans on doing so by creating a step-by-step roadmap for denuclearization in the North with sanctions relief enacted in phases, as opposed to a “big deal” or grand bargain. Accompanying this roadmap would be ‘snapback’ sanctions in the case of noncompliance, where the North’s deviation from agreements would be punished by the automatic reimposition of sanctions.

Lee diverges from Moon, however, on the point of pursuing reunification. In his view, while “it is correct to pursue unification, which is stated by the Constitution … at the current status it is highly unrealistic to pursue unification … as a direct short-term goal.” This follows remarks he made last November, when he said “it is too late to pursue unification,” expressing his preference for a “de facto unification” status and a “pragmatic” approach, he explained, rather than increasing hostilities. He claims there are “more pressing and realistic” ways for the two Koreas to prosper together through exchanges and co-operation rather than setting reunification as a short-term goal. In summary, Lee would first aim to achieve de facto unification through “co-operation, coexistence and co-prosperity,” before seeking a full reunification in the long term.

In contrast, Yoon has proclaimed, like his conservative predecessors, that he will be much more hardline in gaining North Korean compliance. He outright opposes a formal end-of-war declaration, saying it would send the wrong signal in response to North Korea’s increasing nuclear activity. In some respects, his policies overlap with Moon’s in that he aims to open trilateral communication hotlines between the two Koreas and the U.S. and provide unconditional humanitarian assistance to North Korea. This last point is somewhat unusual – this approach of unconditional assistance is more typical of the DPK and contradicts the previous stance of the conservatives, who did not agree to engage with the North in this manner due to its growing nuclear and missile capabilities.

But where there is a marked divergence from the Moon administration’s policies is Yoon’s proposal of what to do in the case of a North Korean attack, namely, enabling the deployment of U.S. nuclear weapons. While experts question this plan’s feasibility, including the U.S.’s willingness to go along with it, Yoon remains firm on this position. In January, he remarked that in the case of North Korean nuclear provocation, there would be “no recourse but a preemptive strike,” drawing criticism from politicians and experts alike that he is stoking fears among the public by “focusing so much on the war-centred idea of ‘preemptive strike,’ rather than focusing on a peace-centred approach of deterring war.”

With all the talk of pre-emptive strikes and North Korea ratcheting up its missile activity, it may be surprising that this issue is not top of mind for many South Koreans. This is a departure from previous elections when North Korean policy was a more significant factor. But there may be electoral reasons for the candidates to take a somewhat more muted approach to their policies regarding reunification.

A shift in attitudes

This election season's lower profile of inter-Korean issues could be because of seemingly more pressing or immediate issues such as the COVID-19 pandemic, the state of the economy, and rising real estate prices. It could also be due in part to a growing shift in attitudes towards reunification and new narratives of nationalism that have emerged in South Korea. In recent years, there has been an observable trend of indifference toward North Korea and reunification. According to a survey conducted in 2021 by the Korea Institute for National Unification (KINU), this view is especially prominent among the younger generations, with 68 per cent of respondents from the so-called IMF generation (those born from 1981-1990) and 74 per cent of the Millennial generation (those born after 1991) indicating indifference on the issue. 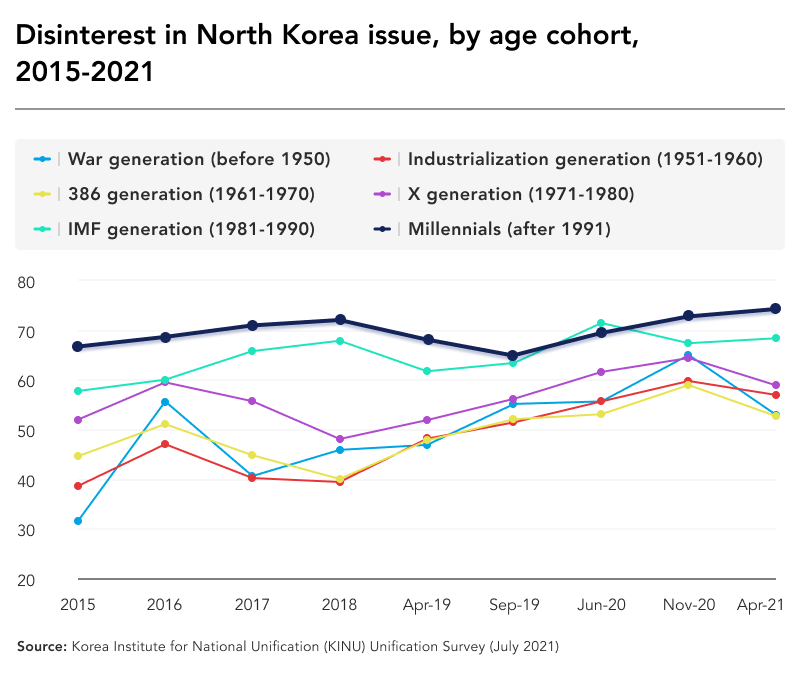 Why the generational shift in attitudes towards reunification and North Korea? One reason could be that many young South Koreans have grown up during a period when North Korea was (and is) seen as a source of instability, despite the intense international criticism and sanctions against it in response to its constant threats and missile tests. It would therefore be no surprise if South Koreans in their twenties and thirties are less likely to see North Korea as part of the same nation, and less likely to support reunification.

Another explanation speaks to changes in the narrative of nationalism in South Korea, with a new national identity based more on civic nationalism than on the type of ethnic nationalism that was more prevalent among the parents and grandparents of younger South Koreans. For example, while they may view resettled North Korean defectors as members of the South Korean national community, they are less likely to see them as sharing the same culture and norms. Steven Denney, graduate fellow at the Asian Institute and Ph.D. candidate at the University of Toronto, puts it this way: Younger South Koreans may feel closer to resettled North Koreans than foreign workers, but they will feel even closer to a native-born child of non-Korean ethnicity.

Furthermore, the discrimination and prejudice North Korean defectors face in education, housing, and employment when they adjust to life in South Korea confirms the complexities of reconciling national identity in undertaking the reunification project. While ethnicity is still a significant component of Korean national identity, its significance to those who grew up during the years of relative abundance and democratic rule has waned. And that could have implications for how strong the ‘pull’ of ethnicity is as a basis for becoming one nation.

Interestingly, South Koreans’ outlook on North Korea could actually depend on the outcome of the election, as government policy appears to have the power to influence public opinion. In fact, South Koreans’ stances on inter-Korean dialogue have tended to fluctuate dramatically according to the government’s optimism or pessimism about the future of relations. For example, Moon’s approval rating spiked to more than 80 percent following his success in improving relations with Pyongyang through the three summits with Kim Jong-un in 2018. Some may even be nostalgic for former President Donald Trump’s active approach to relations with the North. In fact, Pew Global Indicators data showed that support among South Koreans for Trump’s North Korea policy reached 78 per cent in 2019.

These occasional bursts of optimism could indicate that how the next president defines his inter-Korean policy could shape the public atmosphere, despite the weakening consensus among South Koreans on the issue. 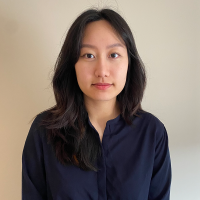 Chloe Kang is a third-year undergraduate student at the University of British Columbia studying Political Science and International Relations.

Will the Honeymoon Period for South Korea’s President-Elect Be Cut Short?