Will COVID-19 Cause the World – and Canada – to Forget about the Rohingya?

The international community breathed a partial and temporary sigh of relief earlier this month after Bangladesh rescued 280 Rohingya refugees stranded at sea. Due to concerns about COVID-19, they are being quarantined on the flood-prone island of Bhasan Char. Their boat was one of several spotted in recent weeks in or near the Bay of Bengal. These boats are carrying dozens, and sometimes hundreds, of Rohingya. Some are leaving Myanmar as the security situation in their home state of Rakhine deteriorates. Others are leaving Bangladesh, trying to escape the dismal conditions of the refugee camps where they have lived in recent years. Many of these boats are hoping to reach Malaysia. But according to Human Rights Watch, Malaysia has pushed back at least one. Neighbouring Thailand has indicated it will do the same. Now, Bangladesh is also hinting that it might be ready to wash its hands of the issue. In April, after refusing to come to the aid of two other boats with several hundred Rohingya on board, Foreign Minister AK Abdul Momen declared that doing so was “not Bangladesh’s responsibility.”

Delivering on these commitments was challenging even before the COVID-19 pandemic hit. Now, these objectives are being complicated by the prospect of coronavirus infections in the refugee camps and a new dimension to the violence in western Myanmar. In addition, enhancing international co-operation will be more difficult as Myanmar’s South and Southeast Asian neighbours use COVID-19 as a pretext to turn their back on the matter entirely, and as sympathetic countries get consumed by their own health and economic imperatives. These challenges are arising at a time when the Rohingya need the world’s help more than ever.

Threat of infection in the camps

The squalid and overcrowded camps housing the Rohingya in southeastern Bangladesh have been on almost total lockdown since early April. On May 14, there were the first confirmed case of COVID-19 in one of these camps. A senior official with Refugees International described it as the “realization of a nightmare scenario.” There are approximately 40,000 people crammed into each square kilometer, making social distancing impossible. In addition, the health and sanitation supplies are vastly inadequate to support hand-washing and other personal-protective measures and there are insufficient medical staff on hand if there is a rapid increase in patients needing intensive care. 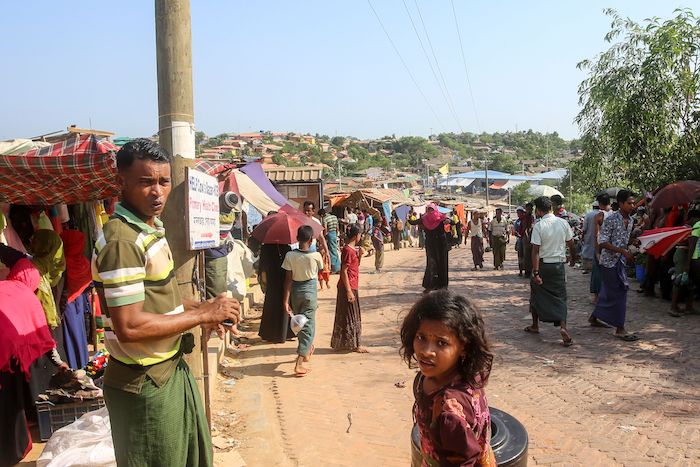 Rohingya refugees gather at a market as the first cases of COVID-19 emerge in the area, in Kutupalong refugee camp in Ukhia, Bangladesh on May 15, 2020. Emergency teams raced on May 15 to prevent a coronavirus "nightmare" in the world's largest refugee settlement. | Photo: Suzauddin Rubel /AFP via Getty Images

In addition, the Bangladesh government imposed restrictions on internet access and telecommunications. The refugees thus have difficulties getting valid and up-to-date information about the virus and how to prevent its spread.

The confrontation between the AA and the state has resulted in a rise in civilian casualties. In fact, in April, a driver for the World Health Organization was killed in Rakhine while trying to deliver coronavirus samples for testing. (The government and the AA blamed each other for the incident.) A spokesperson for the UN High Commissioner for Human Rights, Rupert Colville, said that “Myanmar’s military has been carrying out almost daily airstrikes and shelling in populated areas,” and most of those caught in the crossfire are women and children. He added that the military has also been destroying and burning schools and homes. The UN Special Rapporteur on the situation of human rights in Myanmar, Yanghee Lee, called for another round of investigations into possible war crimes against civilians in Rakhine and neighbouring Chin state.

Although the national governments of Indonesia and Malaysia have made occasional statements of concern about the Rohingya, neither they nor any other Southeast Asian government has made any bold attempts to help resolve the Rohingya issue. Indonesia is hosting about 1,000 Rohingya asylum seekers and Thailand is hosting about 5,000. However, neither is a party to the 1951 UN Refugee Convention, which vastly complicates their recognition of the Rohingyas’ refugee status. Malaysia, also not a party to the UN Refugee Convention, hosts about 150,000 Rohingya. But in late April, Home Minister Hamzah Zainudin re-stated his government’s view that the Rohingya lack legal status and rights in Malaysia, adding that the country should take measures to “stop the intrusion of illegal immigrants.” These sentiments coincided with an alarming uptick in hate speech against the Rohingya and online petitions to expel them from the country. 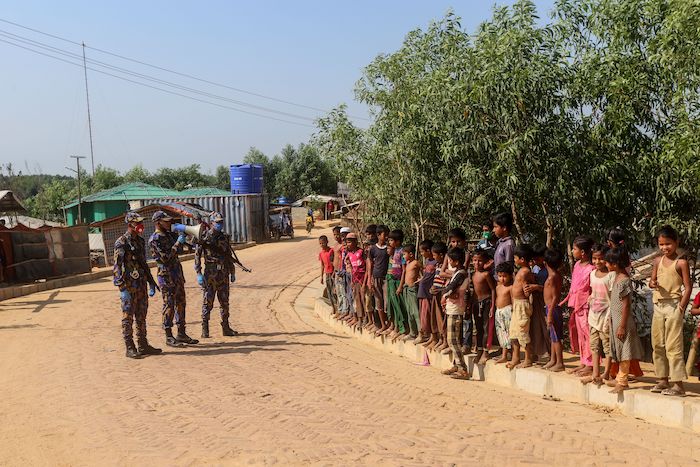 Security personnel use a loudspeaker to raise awareness about the COVID-19 coronavirus in a Rohingya refugee camp in Ukhia, Bangladesh on May 15, 2020 after the first confirmed cases in a sprawling city of shacks housing nearly a million Rohingya. | Photo: Suzauddin Rubel /AFP via Getty Images

Bangladesh, despite not having signed the UN Refugee Convention, has been the only regional country willing to provide temporary shelter to a significant number of Rohingya. If Dhaka decides to end its co-operation, that will make the Rohingyas’ options unthinkably narrow.

That leaves the international community – Canada, like-minded countries, and key international bodies like the UN – to make sure the Rohingya are not forgotten. In January, the Rohingya celebrated a rare victory: a lawsuit brought by the African nation of Gambia to the International Court of Justice (ICJ) resulted in an order for the Myanmar military to halt actions the court believed could be consistent with genocide. Canada should make sure that this momentum isn’t completely lost as governments around the world scramble to respond to COVID-19.While these orders are considered legally binding and are not subject to appeal, it is also the case that the UN has no enforcement mechanism.

However, the ICJ ruling provides at least a sense of momentum in the right direction. Canada should make sure that this momentum isn’t completely lost as governments around the world scramble to respond to COVID-19-related challenges. Next month, the UN General Assembly is scheduled to vote on the next cohort of non-permanent Security Council members. One of the countries they’ll be voting on is Canada. While a coveted spot on the Security Council shouldn’t ultimately be what drives Canada’s commitment to the Rohingya issue, it could be an indication of whether the world thinks Canada has done enough to be part of the solution.