Accessing Asia: Is Canada Falling Behind?

Is Canada falling behind its global competitors in accessing markets in Asia? Many Canadians think so. This is one of the key findings of the Asia Pacific Foundation of Canada’s latest National Opinion Poll (NOP) that taps Canadians’ views on engagement with Asia. Against the backdrop of the restrictive covenants of the new USMCA constraining Canada’s ability to forge free trade agreements beyond the agreement’s membership and the recently signed Comprehensive and Progressive Trans-Pacific Partnership (CPTPP) pivoting Canadian trade interests away from legacy partnerships, it is not surprising that the Canadian public believes trade with Asia will become more important than trade with the United States.

In order to make informed judgments on how Canada can catch up with its international competitors in Asia, it is important to know in which sectors is Canada falling behind. Existing data reveals an interesting story – Canada is winning in a small sector, but losing in a big one.

As the graph above clearly indicates, despite the U.S. being Canada’s largest trading partner, since 2000 Canada’s trade with the U.S. has been falling while Canada’s trade with Asia has been intensifying. While Canada’s economic prosperity will remain inseparable from America, Asia is where Canada should look to for future growth and opportunity. Four Asian countries are of particular importance to Canada – China, India, Japan, and South Korea. In 2017, these four economies accounted for almost 80% of Canada-Asia trade. The Asia ‘Big 4’ can be used as case studies to examine Canada’s economic performance in Asian markets.

How Important is Canada in Asia?

Using data collected from the Geneva-based International Trade Centre (ITC) in the graph below, when Canada is compared with some of the world’s economic powerhouses (in grey) and other CPTPP countries (in blue), Canada (in red) is clearly falling behind with its 1.2% market share. It is right in the middle of the pack among CPTPP countries despite being the second-largest economies among them. Malaysia and Vietnam, both significantly smaller economies than Canada, have market shares more than double that of Canada.

Winning in a Small Sector

In February 2017, the Canadian Advisory Council on Economic Growth published a report that identifies Canada’s agriculture and food sector as globally competitive. This competitiveness was manifested in Canada’s relationship to Asia’s ‘Big 4.’ Canada’s 4.7% market share in the agriculture and food sector was significantly higher than those of CPTPP countries like Malaysia and Mexico, as well as large economies like France, Russia, and Germany. Additionally, Australia’s market share is only 35% higher than that of Canada, despite that country’s geographic advantage. However, according to ITC data, the agri-food sector only accounts for 8% of Asia’s ‘Big 4’s’ total merchandise import.

Source: Organisation for Economic Co-operation and Development
Note: Brunei is not included due to data availability

Losing in a Big Sector

On the other hand, Canada is falling significantly behind in a sector that accounted for 27% of Asia’s ‘Big 4’s’ total imports – the R&D (Research and Development)-intensive sector. Despite being known for producing high-quality R&D, a recent report published by an Ottawa-based think tank, the Council of Canadian Academies, found that Canada’s R&D outputs have not been effectively translated into tangible economic outcomes. Canada’s weak performance here in Asia’s ‘Big 4’ exemplifies this point: When looking at exports of high R&D intensive goods, which includes ICT, aerospace, and pharmaceutical goods, Canada could only achieve a market share of 0.4% in 2016. CPTPP countries that Canada outperformed in the agri-food sector were far ahead of Canada in accessing high-tech markets in these four countries. Mexico’s market share was almost double that of Canada while Malaysia’s market share was 13 times higher than Canada’s. Its weak performance in a sector that makes up a quarter of the entire Asia’s ‘Big 4’s’ merchandise import market is likely a big reason that leads to Canada’s relatively weak presence in Asian markets. 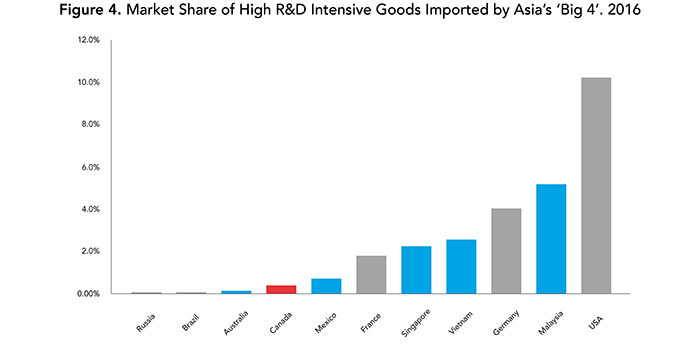 Source: Organisation for Economic Co-operation and Development
Note: Brunei, Chile, New Zealand, and Peru are not included because their market shares were below 0.01%.

Fortunately, as echoed in the results of the 2018 National Opinion Poll, Canadians do realize the importance of commercializing R&D results. In 2017, the Canadian Government launched a nationwide program called the Innovation Supercluster Initiative (ISI) that will draw on expertise from the private, public, and academic sectors. The primary goal of this initiative is to translate Canada’s strengths in its innovation ecosystems into tangible business opportunities and outcomes. When asked whether the Canadian government should involve Asian technology partners or investors in the ISI, 63% of NOP respondents said they think it should. This could potentially create valuable connections and networks for Canadian businesses to penetrate different markets in Asia. In fact, an overwhelming 80% of Canadians agree that the government should help startups emerging from the ISI to access Asian markets. If businesses under the ISI could utilize the preferential access created by the CPTPP, Canada could potentially change its image in Asia from a mere agricultural exporter to a dynamic innovator.

Overall, Canada is falling behind both major CPTPP and non-CPTPP countries in accessing Asian markets. But given the current trade dispute between the U.S. and China and the U.S.’s withdrawal from the CPTPP, this is the opportune moment for Canada to establish its presence as a stable and predictable partner in the region. One practical move would be to foster tighter co-operation with Australia, since both Canada and Australia are rich in resources, strong in agriculture, and share similar values. This could potentially help both countries to catch up in the high-tech sector. And let’s not discount Japan. The CPTPP is essentially Canada’s first free trade agreement with Japan. Once again, although the U.S. and the USMCA remain vital for Canada’s economic wellbeing, Asia is where Canada’s future lies. Canada’s ratification of CPTPP recently has shown its commitment to this dynamic and vital region. 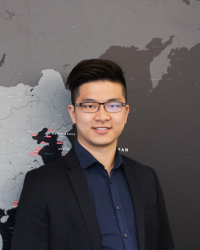 Martin Chan worked as a Research Intern at the Asia Pacific Foundation of Canada. He is studying International Studies and Economics at the University of Wisconsin-Madison where he specializes in politics and policy in the global economy.