There has been a longstanding dispute between British Columbia and Alberta over the potential environmental risks versus the economic benefits of transporting oil or gas through pipelines. As the heightened tensions between Alberta and British Columbia over the Trans-Mountain Pipeline continue to dominate the public discourse, National Opinion Polls (NOP) conducted by the Asia Pacific Foundation of Canada (APF Canada) find the gap between the two provinces has been widening over time.

Since 2013, APF Canada’s polling has asked respondents whether they agree with the statement that “the potential risks to the environment of transporting gas or oil by pipeline or rail and tanker to Asia outweigh the potential economic benefits (e.g. jobs, economic development, etc.).” Our 2018 poll shows that 51% of British Columbians agree that potential environmental risks outweigh economic benefits, in contrast to 29% for Albertans [1]. This difference increased from 18 percentage points in 2012 to 22 points in 2018, while the difference in “strongly agree” increased from 11 points to 21 points during the same period (Figure 1). Clearly, there is a widening gap in public opinions on this issue between the two provinces. This blog explores the reasons behind the growing rift between Alberta and B.C. over pipelines and its policy implications for engaging with Asia. 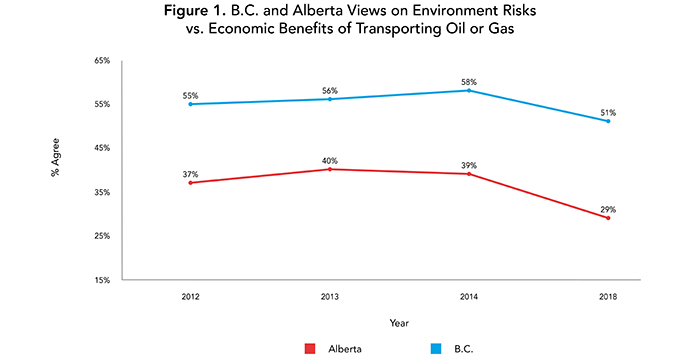 On the surface, differential economic momentum seems to be driving the gap. Real GDP growth and support for the environment seem to go hand in hand in both provinces (Figure 1). When Alberta’s GDP was experiencing robust growth of 5.9% on average from 2013 to 2014, APF Canada’s 2014 NOP found that 39% of Albertans agreed that environmental risks are more important than economic benefits in exporting energy to Asia, and 49% disagreed. The provincial economy then contracted by 3.9% and 3.6% between 2015 and 2016 (Figure 2), respectively, and we saw the decline of the “agree rate” to 24% in 2018, as well as the surge of the “disagree rate” to 70%. This echoes what Alberta’s former premier commented on the Trans-Mountain Pipeline expansion during an interview with Global News in May. Said Rachel Notley: “It is all about standing up for the economy, standing up for job creation, standing up for that sense of hope and optimism that all families need to have when it comes to their economic future. 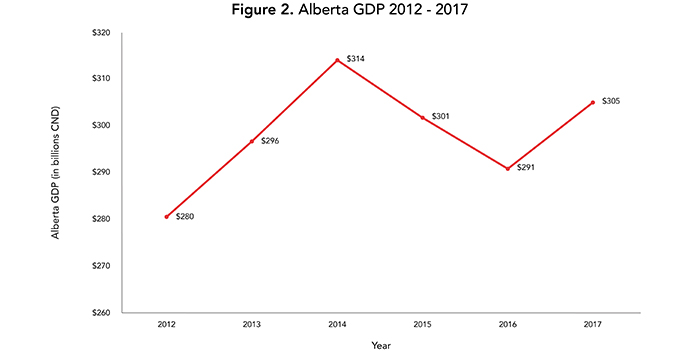 In contrast, B.C. had a relatively strong and steady GDP growth at 3.6% on average from 2014 to 2017, with corresponding stronger support for the environment versus the economy compared to Alberta during the same period.

A closer look at the GDP compositions of Alberta and B.C. reveals that the discrepancies between the two provinces are embedded in their distinctive economies. A heavily energy-reliant economy gives Alberta much stronger incentives to promote energy transportation infrastructure than B.C., which has a more diversified economy. According to the province’s Ministry of Economic Development and Trade, the energy sector contributed the most (17%) to Alberta’s GDP. It has a strong influence on supporting sectors as well, such as manufacturing and construction. In total, these three sectors make up 34% of the province’s GDP. During the economic recovery in 2017, the energy sector drove an 8.1% rebound in the manufacturing sector, including the petroleum and coal products manufacturing sub-sectors, according to Statistics Canada.

Compared with Alberta, B.C. has much more diversified industries and a greater stake in keeping the environment clean and pristine. Natural resources only contribute 6.9% to the province’s real GDP, while the real estate, rental, and leasing sectors comprise the largest share (18.3%). In addition, tourism generated a revenue of $4.9 billion in 2016, an increase of 18% from 2015.

It is no surprise that B.C. residents are cautious about potential risks that an oil or gas pipelines would pose to the local economic sectors. As more gas or oil transportation infrastructure is being built, it increases the traffic of oil tankers between the coast and ports and raises the chance of an oil spill. The history of past incidents has certainly contributed to B.C.’s concerns about oil spills.

Given the energy-reliant nature of Alberta’s economy, the fluctuations in global oil prices have exposed Alberta to undue risks, hence the impact on the province’s GDP. From 2014 to 2016, the selling price of the majority of Alberta’s oil producers, represented by the “Western Canadian Select” price, a Canadian benchmark oil price [3], dropped from US$74 a barrel to US$29 a barrel. Alberta’s economy suffered severe corresponding contractions as a result.

Over the long term, Alberta is facing challenges that are inherent to the province’s oil product itself. Due to the lower quality of its crude oil products and its landlocked geographical position, Alberta’s oil export prices have remained at a constantly lower level than the global benchmark prices. Hence, in order to address the comparative disadvantages of the province’s oil products, lowering the transportation cost of moving crude oil from landlocked Alberta to ports and refineries in B.C. is key to bringing more economic benefits to Alberta. This has led to an increasing demand for infrastructure projects, such as the Trans-Mountain Pipeline.

While it is difficult to draw a conclusion about a causal relationship between the economy and public opinion, the widening gap in public opinion in recent years between B.C. and Alberta over the trade-offs between the environment and the economy in the energy sector seems associated with the two provinces’ differential economic performance, their different economic structures, and Alberta’s strong desire for pipeline infrastructure to boost its economy.

This persistent gap in public opinion between the two provinces may pose a challenge to Ottawa in the face of future traditional energy infrastructure projects, particularly as it looks to Asia to diversify Canada’s energy product exports. Albertans, for instance, show significantly stronger support (80%) for exporting Canada’s energy products to Asia than British Columbians (65%). Ottawa will need to navigate this significant provincial gap as it pursues new opportunities and partnerships in Asia’s energy markets.

In the long run, environmental protection and economic growth should not be treated as mutually exclusive. To encourage cleaner growth in the fossil-fuel-dependent energy sector, it would be beneficial for Canada to establish a national technology transfer program to introduce targeted clean technologies to the fossil fuel industry in Alberta. For example, a Manitoba-based clean technology company was able to transform waste motor oil into diesel fuel, realizing a reduction in greenhouse gas emissions quite affordably.

Canada must seek solutions to narrow the gap of public opinion, or bringing provincial governments on board with these types of programs will be an uphill battle. While those on either side of the debate over oil and gas are pushing their policy preferences, targeted efforts are needed to find a zone of public agreement between the two provinces. The future prosperity of Canada demands a balance between the need for environment protection and a realistic approach to Canada’s role as an energy partner in the world of tomorrow.

[1] “Agree rate” is calculated by adding up the rate of “strongly agree” and “somewhat agree” from the NOP. The same applies to the calculation of “disagree rate.”

[2] From 2012 to 2014, the respondents were asked about their opinions on the transportation of “gas or oil” in one question. In 2018, the question was divided into two. The 2018 data shows a result of the average “agree rates” of two questions on gas and oil in the line chart. No questions were asked from 2015 to 2017.

[3] In general, global benchmarks for oil markets are largely affected by types of oil produced and the distance between the production site and the major port that has a global reach by sea, based on an open publication by Royalty Review Advisory Panel. Lighter oil is traded at a higher premium because it requires less effort to refine into other added-value products. Global oil benchmarks, such as “Brent oil” and “West Texas Intermediate (WTI)” oil, mainly reflect the price of light oil produced by sites that are close to the major ports. 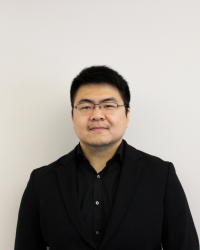 Arthur Xie worked as a Junior Research Scholar at the Asia Pacific Foundation of Canada. He is also a recent BA graduate in economics and international relations from the University of British Columbia. His research interests include Canada’s investment and trade relations with Asia and China’s foreign relations. 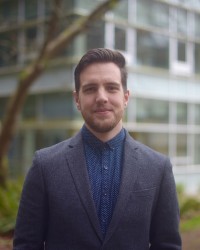 Nathan has worked at the Asia Pacific Foundation of Canada as a Research Assistant. He holds a Masters of Public Policy and Global Affairs degree from the University of British Columbia where he specialized in resources, energy, and sustainability. He is also an Alumnus of the University of Sheffield (MA, 2013).