Now is the time

Now is the time for Indigenous peoples in Canada to connect to the global economy and most particularly with markets in the Asia Pacific. Increasing recognition of the right to self-determination through laws, regulations, and changing norms, and new tools like modern trade practices, are helping enable Indigenous peoples to become increasingly present actors in the global economy and expand their opportunities.

Opportunity in the global economy

Indigenous peoples entering the global economy on their own terms is viewed by many as the key to future Indigenous economic development. Recent changes have made it increasingly opportune for Indigenous peoples to do so, including the 2007 United Nations Declaration on the Rights of Indigenous Peoples, a focus in Canada on inclusive trade since 2015, and the Truth and Reconciliation Commission of Canada’s calls to action, including those that:

These recent events transpired from a long history of global effort by Indigenous people, including promoting Indigenous integration in the global economy as a pathway to reconciliation with and economic development of Indigenous communities.

As potentially the most comprehensive and inclusive international trade agreement for Indigenous peoples, despite room for improvement, the U.S.-Mexico-Canada Agreement (USMCA, formerly NAFTA) should spur new norms of increased Indigenous inclusion in all agreements, such as those being discussed between Canada and Asia-based partners, and perhaps open the door for global Indigenous integration. As Canada’s Minister of International Trade, François-Philippe Champagne, commented in 2017 in London, U.K. at the first meeting of Commonwealth ministers responsible for trade:

“Progressive trade means helping ensure that that all segments of society can take advantage of the opportunities that flow from trade and investment – with a particular focus on women, Indigenous peoples, youth, and small and medium sized businesses.”

Indigenous private sector actors are also taking action. The World Indigenous Business Forum facilitates discussion on trade and investment between Indigenous peoples around the world, the International Inter-Tribal Trade and Investment Organization was involved in promoting and designing the inclusion of Indigenous articles in the USMCA, and other non-government organizations are successfully discussing and acting on these topics in Canada and abroad. In fact, Indigenous groups in Canada, Australia, New Zealand, and Taiwan, are all now partnering on trade missions to promote the integration of Indigenous populations into the global economy. One area of particular interest should be the Asia Pacific.

The Asia Pacific is a region with rapidly increasing economic and political importance that Indigenous peoples should be interested in engaging with.

Indigenous peoples seeking new market opportunities are well positioned to meet the increasing needs and desires of the Asia Pacific.

Asia Pacific tourists seek the Northern Lights, hunting, and other experiences that Indigenous peoples can offer. The Indigenous Tourism Association of Canada is prepared to meet this demand, with a goal of establishing 50 Indigenous tourism companies with an international focus by 2021, and there are funds to achieve this.

The agri-food, fisheries, and seafood sectors are other areas of promise, as trade with the Asia Pacific region in these sectors has increased by 300% since 2010. Asia Pacific consumers have high regard for the safety and quality of these Canadian products. With increasing governmental action, including Indigenous funding, participation and skills development, and increased support for trade with Asia in the agri-food sector, the stage is set for Indigenous businesses to conduct trade in these sectors.

Asia’s large population combined with increases in GDP per capita has contributed to increasing demands for energy, including clean energy. Hundreds of energy projects are intricately connected to Indigenous economies as energy resources and related infrastructure projects are located on Indigenous lands throughout Canada. The potential for Asian trade and investment in Indigenous energy projects is immense.

For youth, it can be difficult to understand and prepare for adding value in the global economy. The reality for many Indigenous people is that there are additional challenges to doing business, like geography, education, and socioeconomic conditions, and there is already a need for Indigenous youth to fill critical positions in their own communities and throughout the country.

Just as Indigenous development transcends traditional definitions of success, Asia engagement is not only about increasing profits. It is also about building partnerships based on mutual respect for each other’s cultures, understanding of shared history and hardships, trust in each other’s goals, and working together to solve modern challenges like the need for clean energy and respecting the land while continuing to thrive as nations.

Engagement is a two-way process involving sharing and increased understanding with the Asia Pacific and Indigenous peoples. Approximately 260 million Indigenous people live throughout the Asia Pacific, many of whom are critically involved in the same issues arising from colonialism and other challenges. For example, the Asia Young Indigenous Peoples Network’s mission includes pursuing self-determination, food sovereignty, and cultural integrity for Indigenous peoples in Asia, and has provided recommendations to the United Nations on such topics.

Youth can begin preparing for their future by developing Asia competencies, that is, the skills and knowledge required to succeed in a global economy pivoted to Asia. This includes language skills, regional knowledge, industry knowledge, networks, and cultural awareness. Students can inquire about study abroad opportunities like those at the University of Northern British Columbia and the University of Otago, which usually include funding and support. The Indigenous Bursary and Scholarship tool and many universities themselves offer additional support. Anyone can take international internships, search for exchange opportunities, and take language lesson in a classroom or via a free app. Youth can ask their local leadership about conferences, council positions, discussions, and other opportunities to gain skills and advocate for the importance of understanding an Asia-oriented world.

By understanding that Indigenous peoples have their own resources, voices, values, and interests, Indigenous youth can begin thinking about the possibilities for their own global futures. It is imperative that Indigenous peoples increasingly co-operate across the country to represent their interests. Doing so will increase their ability to communicate and engage globally. With support in building opportunities and engagement, youth can improve the outcomes of nations around the globe. 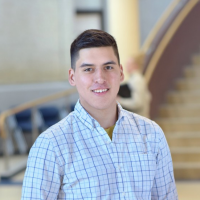 Dakota Norris is a recent graduate of the University of Saskatchewan. Originally from Inuvik, Northwest Territories, he is a Gwich’in First Nation youth. Dakota has spent several summers as a research assistant on the Building Northern Capacity through Entrepreneurship project, a multi-year study examining entrepreneurship and economic development in the Northern Saskatchewan context. He currently works as a Junior Research Scholar at the Asia Pacific Foundation of Canada, examining how Indigenous Canadians can engage with Asia.