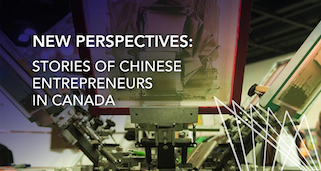 “The way I see it, immigrants generally have three options when they arrive in Canada: study, settle down, and work. When I first came to this country two years ago, it was clear to me that if I wanted to settle down, I would have to work. Simply finding a job, however, was not the difficult part. The challenge that confronted me was finding something that truly made that initial decision to make the big move to Canada worthwhile for myself and for my family.”

Like many before him, Frank Lin relied on his entrepreneurial spirit, ambitions, and tenacity to forge a new and comfortable life for himself and his family in Canada. However, what sets him apart from other new Chinese immigrants is the fact that he has chosen to take the path less travelled – or, more apt, settle in a British Columbian city less known to the Chinese community: Kelowna.

Unlike the Metro Vancouver area, where almost 30 percent of its total population of 2.5 million is of Chinese heritage, less than one percent of Metro Kelowna’s 200,000 inhabitants identify as ethnic Chinese. As a newcomer relatively unfamiliar with Canadian culture, values, and, to an extent, even the English language, uprooting his entire life to Kelowna – where his difference as an ethnic minority is more visibly pronounced – was not an easy task for Frank. But at the same time, it was also his need and desire to overcome those same cultural differences and language barriers that has given more meaning and value to the reality of settling into a new Canadian life. Above all, it has been this ongoing learning experience that has allowed the Lins to carve out a space for themselves in the Kelowna community. This is the story of Frank Lin, a newly immigrated Chinese entrepreneur to Canada.

With various barriers to entry in an already crowded Canadian job market, it is not uncommon for new Chinese immigrants to find themselves working in Chinese restaurants and grocery stores. While one can certainly derive a lot of valuable experience and skills working in these labour-intensive jobs, as far as Frank was concerned, this was not a sustainable path for him – especially not at a stage in his life where providing long-term stability for his family was and remains a priority. In his own words, his Canadian journey started at an “awkward age.” That is, as a devoted husband and young father who left behind a career in China, he simply had too much experience, too many ambitions, and, indeed, the burden of too many responsibilities – a stint at a grocery store simply would not cut it.

More importantly, Frank, an entrepreneur at heart, did not make such a drastic move across the Pacific simply to settle for a low-income job. “If this was the case,” he says, “I would seriously have to reconsider my initial motives for coming here in the first place, and I would even question my personal worth and value if this is where I ended up.” Therefore, in an effort to avoid this pitfall, Frank did his homework prior to coming to Canada. He studied up on his potential barriers to entry in the Canadian job market, identified how he could leverage his existing skills and knowledge to give him a comparative advantage in a new business environment, and explored how he could add value to the still unfamiliar society that awaited him. Less than a year after moving to Kelowna, Frank is now the owner of a local sign and graphics company, Stacy Screenprint Ltd.

Although Frank may be new to the neighbourhood, Stacy, on the other hand, has been a household name for 36 years. Established in 1980, Stacy Screenprint has been supplying the local community with everything from retail signs to business cards, window lettering, and car decals. According to Frank, Stacy’s previous owner treated the company like his own child. He had looked after the business since he was 26 years old, and there was undoubtedly a lot of emotional investment – not to mention capital and time – that was put into running the business by the previous owner, now 60. Suffice it to say, choosing his partner and eventual successor in taking over the company after his retirement was not a decision that Stacy’s previous owner took lightly. Having had a career in a similar industry in China, it was Frank’s knowledge and expertise that caught the previous owner's attention, but it was his work ethic, tenacity, and willingness to learn that earned him the owner’s trust.

After purchasing Stacy Screenprint, Frank needed to devise a plan to take the business to the next level. This was no easy feat for Stacy, an old company fairly set in its ways, and Frank, a newcomer to the game. Furthermore, with the purchase of the company, Frank also became the new boss to Stacy’s loyal staff and team members – the longest having worked with the company for 23 years, and the newest for six. Attached to the deal was also the inheritance of a corporate reputation in the community that far preceded the entirety of Frank’s Canadian experience to date. It was therefore also on Frank’s shoulders to invigorate the business while ensuring that the integrity of Stacy Screenprint’s long-standing corporate culture and values stayed intact. 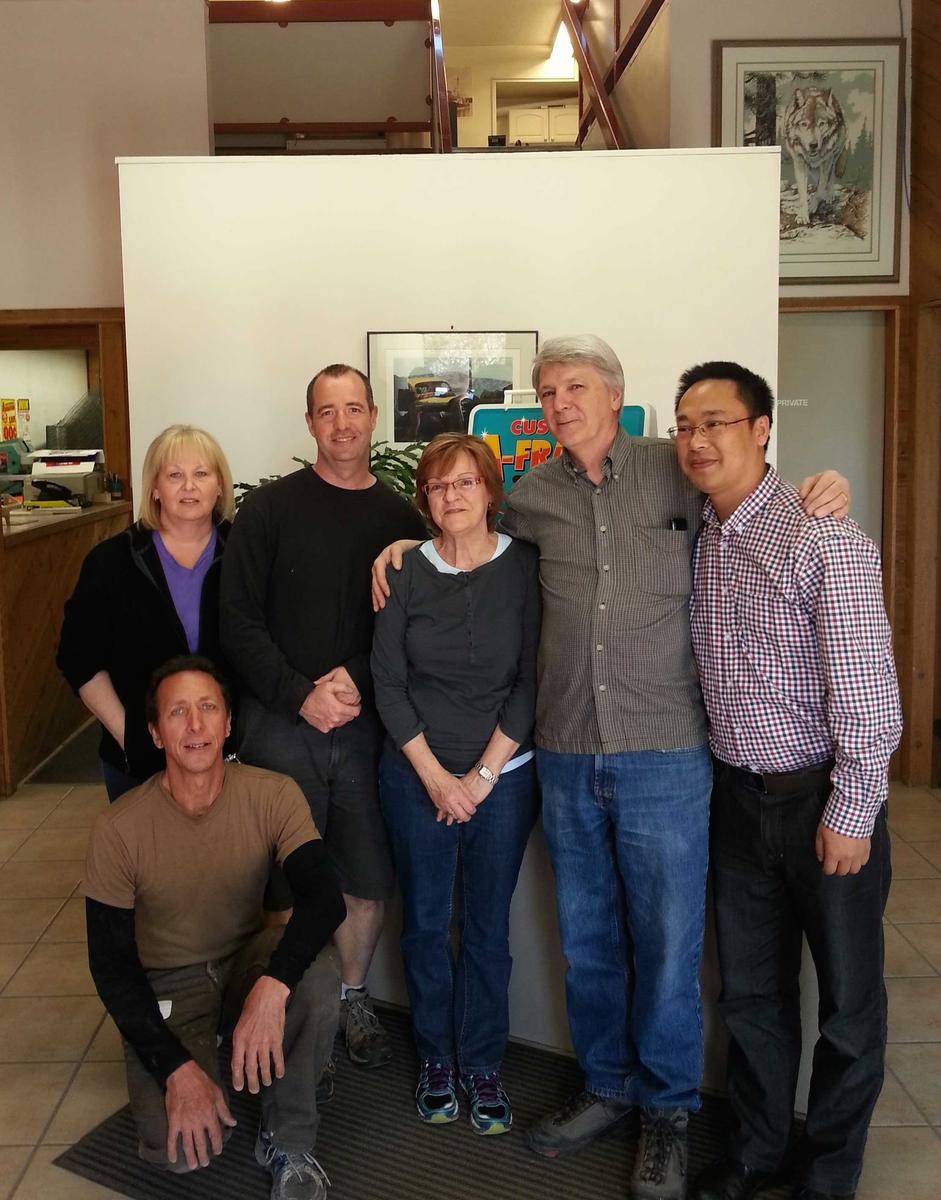 Frank Lin (far right) and his team at Stacy Screenprint.

Thus far, Frank has successfully guided Stacy Screenprint onto a path of stable growth. Importing his experiences from his previous career and completed projects in China, he injected new technologies and skills into the company’s portfolio and toolkit. Equally as important, however, was his ability to build and foster friendly and professional relations with his new staff and team members. According to Frank, he was able to break through any initial cultural and language barriers and build trust with his new team. “At the end of the day,” he explains, “I believe that building and fostering trust in a new community is critical to any endeavour.” And it is this trust building that was and continues to be the key to Frank’s success, in both his professional career and personal life in Canada.

Of course, trust does not come easily. It takes time, patience, and an open and accepting attitude toward difference to build that foundation and relationship. Given this, perhaps the greatest challenge for Frank has been adjusting to a whole new set of societal values and norms. “When we uproot our lives and move to a brand-new country, we turn a page, leaving behind all that we were once familiar and comfortable with.”

Especially in a less densely populated city like Kelowna, where familiar conveniences, amenities, and social facilities may not be as easily accessible to a new Chinese immigrant, settling down and settling in means stepping beyond comfort zones and hurling oneself into new situations. What has helped Frank and his family adjust to their new lives has been their participation in different social groups, especially joining their local church. The church and its community are now indispensable parts of their lives, and through different community events the Lins have felt much more welcome and engaged.

In fact, Frank and his family make the effort to involve themselves in local charitable events and activities, and have become active contributors to the betterment of the local community. Given the nature of his work, Frank has been able to contribute his logo and signage services to help out with different local events and initiatives. “I think all new immigrants should be more actively engaged in social events,” he opines. At least in his case, being an engaged community member has allowed him to realize his personal worth, simultaneously earning him the gratitude of his community as a new and welcome addition to Kelowna.

Hearing it Directly from the Source

Although community groups have been an invaluable resource for Frank and his family, Frank hopes to see more government-provided information made accessible in the future to help newcomers with their transition to Canadian life. At present, the Canadian government has already made major laws and regulations available online in multiple languages. “We can already learn a lot from these online resources,” Frank says. “However, in the future, I hope to see the provision of more public services made accessible in Chinese as well.”

For information such as how to file one’s taxes, transfer international driver’s licences, and even increase one’s cultural competency, new immigrants tend to rely predominantly on information in Chinese disseminated by third parties. “When we get our information from a third party, be it a consulting firm or other business,” Frank explains, “the original government document in French or English has already been interpreted and filtered by a source that is inevitably biased and interest-driven.” Because of this, it is not uncommon for different sources to provide overlapping or even conflicting information, often leading to confusion and misunderstandings on the part of the new immigrant.

For Frank and many others in a similar situation, it is preferable to read and learn about national and local laws, policies, regulations, and services directly from the original government or administrative source. This gives immigrants more agency in interpreting how Canada and local communities function, and a better understanding of how they can best fit themselves into the landscape. According to Frank, more government resources made available in Chinese and other languages would better reflect and accommodate Canada’s increasingly multicultural demographic.

When asked about his success as an entrepreneur, Frank says, “I cannot say that I’m a ‘big success’ of any sort. Where I have succeeded, however, is in my gradual efforts to immerse myself into this new community.” To Frank, the wealth he has amassed in Canada cannot be represented by a numerical figure. Instead, it is the degree to which he has felt increasingly welcome and accepted into his new home that has fuelled his sense of achievement.

Now well into his third year as an adopted Canadian, Frank’s “two-step guide to success” for future immigrants and entrepreneurs is as follows: 1) Do your homework before coming to Canada – that is, do the necessary preparation work to familiarize yourself with the market, the economy, and the society you will soon call home. 2) Throw yourself into the deep end – in other words, do not spend all of your time wading in the familiar waters of Chinese social circles and communities; swim out as much as possible until you are fully immersed in the dynamism of Canadian culture.

Comparing Kelowna to the city of Richmond - a British Columbian city where 49 per cent of its population is ethnic Chinese - Frank referred to his personal experience and weighed in on the benefits of starting off in a city less saturated with immigrants. “If anything, it strips you away from the crutch of familiar faces, languages, norms, and cultural amenities that can be readily found in Richmond.” As he has experienced, this is by no means an easy adjustment to make. However, it was this deliberate decision to distance himself and his family from the convenience of familiarity that has been crucial to their success in Canada so far – not only in terms of achieving early entrepreneurial success with Stacy Screenprint, but also in terms of being a respected boss, and a valued citizen in Kelowna.