New Perspectives: An Introduction to Our Series on Immigrated Chinese Entrepreneurs in Canada 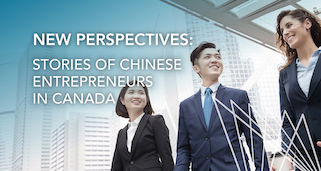 Immigrants have made great contributions to Canada’s economic development in its history of 150 years. As a recent APF Canada article pointed out, the Canadian government has called for an increase in annual immigration to ensure Canada’s future economic growth in the face of an aging population and economic growth stagnation.

Over the past 15 years, China has been the No. 1 source of Asia Pacific immigrants to Canada, numbering half a million in total. With different backgrounds and expertise, and having experienced different career paths in China, many of them have chosen to start new businesses in Canada. It is never an easy task in a different culture and business environment, yet they have tried hard to adapt to and integrate with their local communities, and to contribute to Canadian employment and the Canadian economy.

Around the world, Chinese communities are celebrating the Spring Festival – the lunar new year – when families gather together and look to the future. In honour of the season, the Asia Pacific Foundation of Canada is publishing this series of stories of four entrepreneurial Chinese immigrants in Canada. In these stories, Frank, Guo, Jack, and Leon share with us their tales of business development in Canada, and their thoughts around moving towards their goals in a new country. Like many immigrant entrepreneurs, they have gone through ups and down, trying to settle down and continue to prosper. With hard work and perseverance, they have progressed well.

We hope these stories will provide a new perspective on Chinese immigrants in Canada, and help Canadians better understand their Chinese neighbours, who are working together to make Canada a better place for everyone.