BC Business Performance in Asia: Living up to Expectations?

The Asia Pacific Foundation of Canada recently released a report entitled, Boosting British Columbia's Exports to Asia: A Survey of B.C. Businesses. This survey of 146 small- and medium-sized B.C. exporters — some exporting to Asia, others not active in the region — revealed several noteworthy findings. Among these:

The survey provides valuable insight into the challenges faced by B.C. firms in Asia, and taps into the views of exporters currently engaged in Asia.

But do the results hold outside of B.C.? Or are the findings unique to the province's own set of commercial and demographic characteristics?

Comparing B.C. SMEs with the Rest of Canada

While the survey report was focused on B.C. small- and medium-sized enterprises (SMEs), we also collected a smaller sample of responses – 58 – from Canadian companies outside B.C. This included 30 exporters currently active in Asia, and 28 exporting only to non-Asian markets.

For the most part, the data was consistent between B.C. and non-B.C. companies; they went into Asia for similar reasons, have had similar challenges, and value similar services. The non-B.C. results added confidence to our findings from the larger B.C. sample.

B.C. SMEs, however, were less likely to view their venture into Asia as a success. We asked companies, "Overall, would you characterize your company's performance in Asian markets to date as better than expected, worse than expected, or as expected?" This provided our measure of perceived success in Asia. 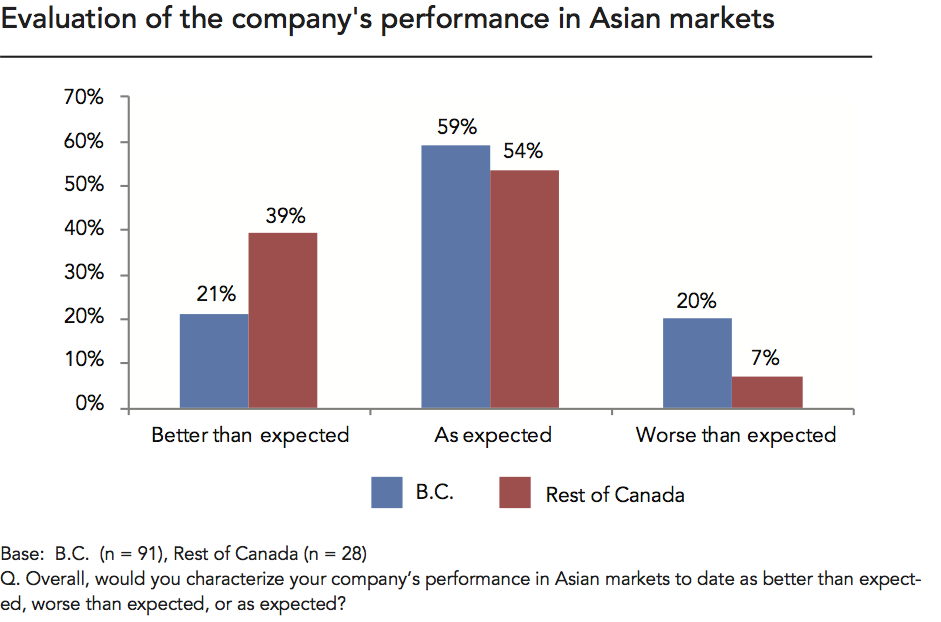 B.C. companies were also more likely to respond that one of the biggest barriers they faced is a lack of profit in Asian markets. Over one-third (35%) of B.C. companies ranked "no profit" as a high concern (5, 6, or 7 on a 7-point scale). In contrast, only 16 per cent of Canadian companies based outside of B.C. ranked "no profit" as a high concern.
Why are B.C. companies less likely to report success in their Asia ventures? To answer this, we examined three possible ways to explain the difference: sector, size, and support.

One reason B.C. companies are less likely to report success could be related to regional sector types. In our survey, the heaviest concentration of B.C. exporters to Asia was in the tech sector (e.g. 14% in Information and Communications Technology). Some of these may be high-risk, high-reward start-ups, where business failure is part of the industry culture.

When we further examined sectoral differences, another sector jumped out as a key differentiator when comparing B.C. to the rest of Canada. Only two per cent of B.C. Asia exporters identified themselves as part of the "Agrifoods" sector, contrasted with 14 per cent of non-B.C. companies.

Perceptions of success may also be a function of company size. While all the respondents were SMEs – defined as companies with between 1 and 500 employees – the respondents in B.C. were on the smaller side of the definition. A little over one-fourth (28%) of B.C. exporters to Asia reported having 100 or more employees. The share of non-B.C. companies with 100 or more employees was 39 per cent.

Finally, we looked to see if the differences in perceived success could be explained by the use of particular services. B.C.'s provincial government has invested significant resources in trade offices in Asia, but B.C. is also geographically far removed from the headquarters of federal government services. One possible hypothesis is that non-B.C. companies receive more support to make their ventures successful.

Yet a closer look reveals this difference is almost entirely attributable to the fact that larger companies are more likely to use federal government services. Larger companies appear to have the resources, knowledge, and/or experiences that enable them to better take advantage of government trade promotion services. Since the surveyed B.C. companies were smaller in size, they were also less likely to utilize government services. Furthermore, we found no clear correlation between use of federal government resources and perceptions of success, though the possibility deserves more research.

BC Guidebook to Doing Business in Asia

Our survey of exporters to Asia showed that B.C. companies had a broadly similar set of experiences as those outside B.C., though they were less likely to report higher than expected levels of success. Ultimately, none of the explanations we examined fully accounted for the 'perceived success gap.' We suspect that B.C. companies are more likely to view entrance into Asia as a 'normal' part of their business ventures, as compared to the rest of Canada, and thus hold different expectations of success. However, we will have to wait for a larger survey to develop a more comprehensive answer to this puzzle.

The findings do underline the fact that there is still a lot to learn, and B.C. businesses likely have room for improvement in their Asian ventures. Supported by the Government of BC, APF Canada's Guidebook to Doing Business in Asia for B.C. Businesses contains resources from several sources, including governments and Asian-Canadian business associations, designed to give SME managers an introduction to doing business in Asia, and to provide them with the resources they need to take their business to the next level.

Is Canada’s Print Media Fair on China? There is No Popular Anti-trade Revolt – it’s all Politics and Punditry