Canada-US Relations: The Best Days Are Ahead

The Asia Pacific Foundation of Canada (APF Canada) presented the second installment of the John H. McArthur Distinguished Fellowship at a sold-out event on January 15, 2019, at the University of Toronto’s Rotman School of Management. The Fellowship’s 2019 honoree was Michael R. Bloomberg, the founder, CEO, and owner of Bloomberg LP, and 108th mayor of New York City. Bloomberg’s keynote address focused on Canada-U.S. relations in uncertain times, touching on topics from the U.S.-China trade war to climate change. Despite the present turbulence in the bilateral relationship, Bloomberg expressed optimism for the future of this historic alliance.

Bloomberg said his optimism for an enduring Canada-US relationship is rooted in a history of deep co-operation and shared values. Americans and Canadians share the longest undefended border in the world, he reminded the audience, and more than that, the two countries are partners on the battlefield and in the marketplace. 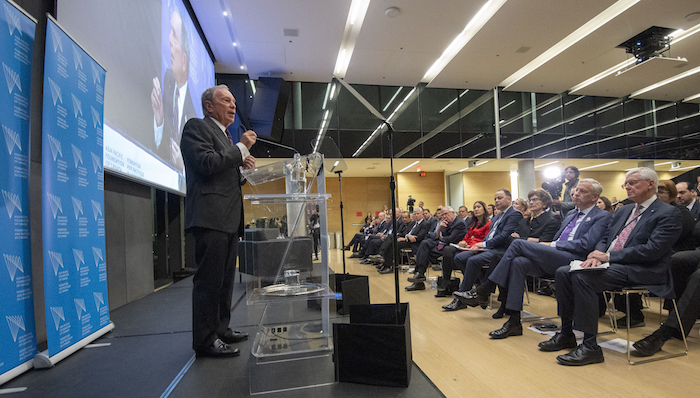 Together, Canada and the U.S. have helped defeat Nazism, Fascism, and Communism, and have made strides in defeating global terror, he said. Drawing on his experience as New York’s mayor, he cited the example of 9/11 and the kindness and generosity Canadians showed New Yorkers and all Americans in those dark hours. It is because of this shared history, from the bloody fields of 1940s Europe to the ashen streets of Manhattan in 2001, that Bloomberg said he remains hopeful for continuing collaboration and co-operation during these turbulent times.

Bumps along the road

But no relationship comes without its bumps, Bloomberg reminded the invite-only audience of business, government, and academic leaders – and the Canada-U.S. relationship is no exception. He recalled the Nixon-Trudeau era in the late 1960s and 1970s. The two leaders were not exactly ideologically aligned, he noted.

He pointed to 1971 as an example, when the Nixon Administration slapped a 10 per cent surcharge on imports. Traditionally, Bloomberg said, Canada was exempt from such flare-ups of U.S. protectionism. Not this time, and the Trudeau government was not pleased. Frustrations spilled into the public realm, with Nixon calling Trudeau a “bum” and Trudeau retorting that he had “been called worse things by better people.”

Despite this setback in the relationship, Nixon lifted tariffs four months later, and the alliance remained as strong as ever.

The strength of the relationship also comes from shared values, Bloomberg told the crowd in Toronto. Despite the current political environment in the U.S., valuses such as freedom, democracy, civil rights, ethnic pluralism, and a compassionate spirit toward immigrants,  continue to unite the two countries. 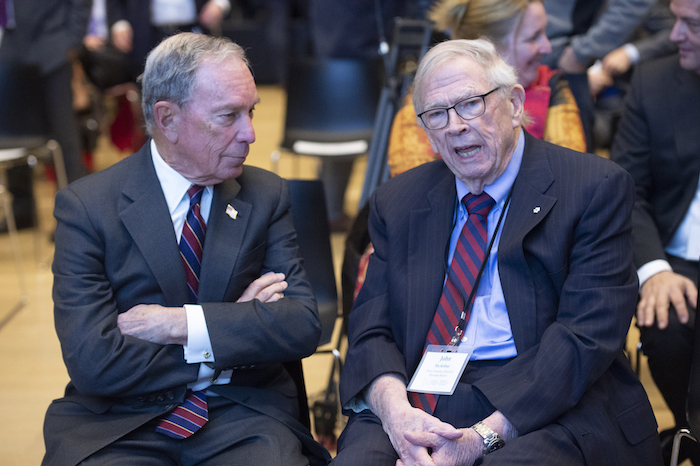 Michael Bloomberg shares a moment with John H. McArthur, Dean Emeritus of Harvard Business School and former Chair of the APF Canada Board of Directors | Photo: The Canadian Press

These values are far stronger than any friction related to tariffs, or any ideological differences between two leaders, Bloomberg opined.

The current state of affairs

Despite these shared values, the much-needed long-term thinking about policy challenges is often missing, Bloomberg lamented. Canada and the U.S. are not currently working together on key issues that they should be tackling hand-in-hand.

There is no doubt that there are differences between the Trump Administration and the Trudeau Government. However, Bloomberg said that the two countries need to be working together on climate change, the clean energy economy, confronting Russia, and standing up to China’s long-standing trade practices.

Commenting on the trade policy of the current U.S. administration, he expressed his regret that the misguided U.S.-China trade war had caused collateral damage to Canada, citing the recent tensions over the arrest of Meng Wanzhou, Huawei’s CFO, as one example.

Selling the positive vision of trade

Bloomberg then turned to what he sees as a positive vision for global trade, noting that trade has lifted more than 1 billion people out of poverty in recent decades. The prosperity accelerated by trade is unprecedented, he said.

Trade linkages also make the world more peaceful. Commercial ties ensure that countries’ interests are intertwined and aligned. He cited trade as a key catalyst for global stability, both in decades past and well into the future.

Global trade has not been perfect, Bloomberg acknowledged, as benefits have not spread to all parts of society. He posed a question that truly represents the challenge of the times: how to promote growth while ensuring that all are lifted – i.e. growth that is sustainable and fair. 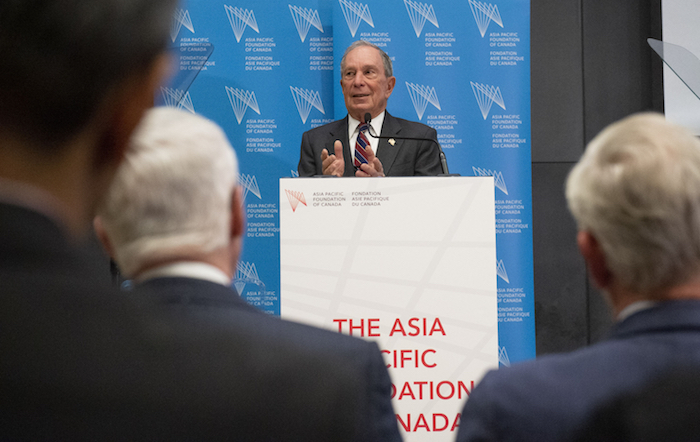 Michael Bloomberg, the founder, CEO, and owner of Bloomberg LP, shared his thoughts on the values and goals that Canadians and Americans embrace and share at the University of Toronto's Rotman School of Management on January 15, 2019 | Photo: The Canadian Press

For the answer, he cited The New York Times columnist Thomas Friedman, who said that through deliberate policy choices governments need to strengthen society’s floors – including social and economic safety nets – not put up walls and ceilings. Strengthen the floors, Bloomberg echoed, and no one gets left behind.

Providing workers with the skills they need for the 21st century is just one step, he said. Citing coal, a favourite focus of the current U.S. president, Bloomberg stated that, as America and the world fights climate change, government and society have a duty to coal workers and their communities – they did, after all, power the victorious Second World War effort and the economic gains of the post-War era. They need, in short, a stronger floor.

A call for leadership

The former mayor called on Canada and the U.S. to work together, stating that when the two sides align their priorities, both are better off. Maintaining his optimistic tone, Bloomberg spoke of the limitless opportunities that lie ahead. These include the chance to mitigate climate change, to lift billions more out of poverty, to achieve gender equality, and so much more. 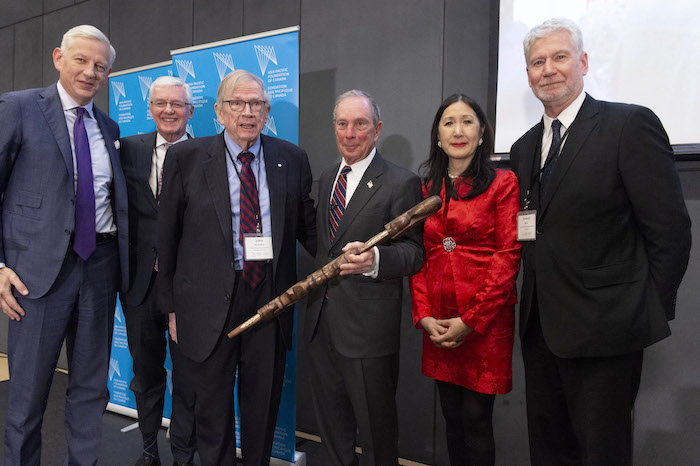 He acknowledged that many countries doubt America’s lasting role as a partner on the world stage, and that there has been turbulence in global affairs in recent years. But he also urged the audience not to mistake the chaos they saw coming out of the White House with the genuine appreciation for the bilateral relationship held by both Democrats and Republicans.

The Canada-U.S. economic partnership survived the Great Depression and the 2008 financial crisis, he noted. The security partnership has been battle-tested through the decades as well, withstanding challenges from fascism to terrorism. When it came to the Canada-US relationship, Bloomberg said, the best days are still ahead.

The Asia Pacific Foundation of Canada would like to acknowledge the following sponsors and supporters for their participation in this 2nd John H. McArthur Distinguished Fellowship event: 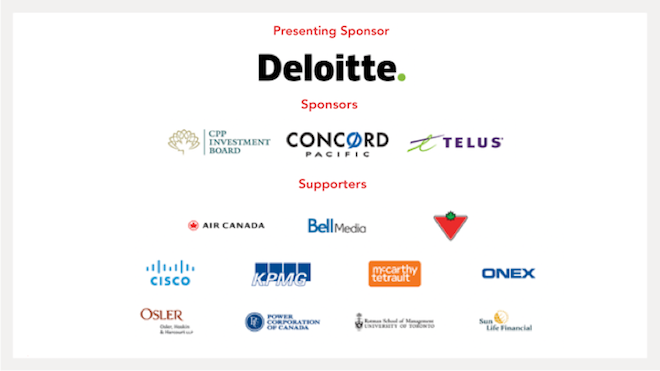