In the start-up community, the biblical-sounding term ‘Valley of Death’ refers to the precarious intermediate stage between Research and Development (R&D) and product commercialization. This gap is especially pronounced within the cleantech sector, which requires greater R&D investment and is heavily reliant on government regulations and policies to launch products and services. Joseph Lassiter from Harvard Business School, contrasts this particularity in the cleantech sector with the well-funded Internet industry and argues that “public policy support in the form of subsidies and mandates is required.” According to industry accounts, many Canadian cleantech firms languish in the ‘Valley of Death.’ A closer at the sector reveals structural problems – especially with financing – and highlights the need for the Government of Canada to assist in this area.

Has Canadian Cleantech Left Behind the Valley of Death?

The 2017 Global Cleantech Innovation Index, which compares the cleantech innovativeness of 40 countries, ranked Canada in fourth place. The Index attributed Canada’s strength to its “relative advantage in providing start-ups with access to private capital via cleantech-focused funds and domestic investors,” which has tripled “the number and value of cleantech funds and domestic investors targeting cleantech.”  The report further notes that Canada ranked first in making funding available for early entrepreneurship, a ranking that considers the amount of venture capital invested in cleantech companies as a proportion of GDP between 2014 and 2016. The Index assessment, together with Canada’s C$2.2-billion investment in the cleantech sector in its 2017 federal budget, paints a rosy picture.  However, domestic observers and stakeholders have concerns about the health of the industry and are calling for changes to ensure Canada doesn’t lose its competitive edge in the global market. 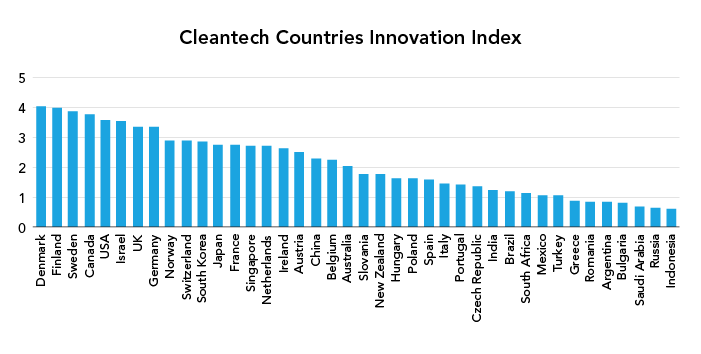 Canadian Cleantech on the Ropes?

Analytica Advisor’s 2017 Canadian Clean Technology Industry Report assessing Canada’s cleantech sector tells a different story from the Index. Financing challenges, especially access to growth capital, have been cited as the primary barrier for Canadian cleantech firms. Céline Bak, the CEO of Analytica Advisors, points out that some of the leading companies in the sector are “on the ropes” and that “Canadian firms do not have access to financing enabling them to meet demand.” Mike Monteith, a representative from the Council of Canadian Innovators, notes that accessing capital is too difficult under the current business model that traditionally requires a two-to-five year business plan, and suggests that a longer view – 20 years, perhaps – would be a more appropriate framework to fund firms working with disruptive technologies like cleantech. 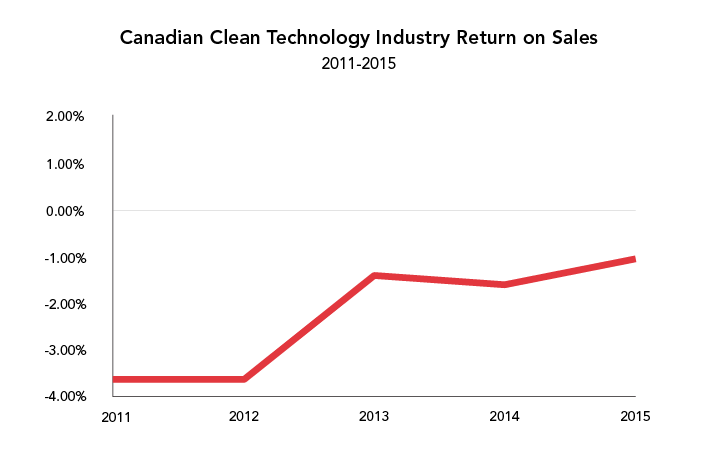 These contrasting views on access to capital suggest the greatest challenges exist in the commercialization stage. As noted by the Index, there is an abundance of early stage venture capital funds, which further the emergence of promising, innovative new firms. However, as the Advisor report notes, Canadian cleantech firms have not been profitable since 2011, causing apprehension among domestic investors. During the federal-provincial-territorial assistant deputy ministers meeting on Developing a Collaborative Approach to Exporting to China hosted by the Asia Pacific Foundation of Canada on October 12, 2017, industry representatives also mentioned additional support for “scaling-up” ventures in markets like China that demand larger-scale projects. Financing problems were identified at the post-R&D stage, which heightens the threat of innovative firms – along with their technical expertise – being hijacked by foreign capital in a desperate attempt to exit the Valley of Death.

The Government that Must Act

In this context, the case is strong for the federal government to play a more active role in furthering the growth of the cleantech sector. The introduction of specialized funds for cleantech industry is a positive step. However, the federal government could also leverage existing interest in the market by adjusting financial regulations to accommodate the special needs of cleantech firms, such as a longer timeframe for business plans. As noted by Harvard’s Lassiter, cleantech R&D and commercialization take more time because the environmental sector requires government collaboration. The slow adjustment of the Canadian financial sector to this new, disruptive innovation model, has further challenged Canadian cleantech entrepreneurs. The Government of Canada’s 2017 budget promise to invest C$700 million in the industry through the Business Development Bank of Canada makes perfect sense.

There are other ways the government could help expand market opportunities within and outside Canada. The Advisor Analytica report notes current Canadian regulatory policies, which do not punish carbon pollution very harshly, dis-incentivize other countries and potential clients from setting environmental performance standards. This in turn reduces interest in the services of cleantech firms.

Government assistance is needed to grow Canada’s cleantech market, where only slightly more than half (51 per cent) of revenues come from outside Canada and of that an even smaller portion (18 per cent) orginate from non-U.S. markets. If the federal government can help get more cleantech firms to Asia, it could help spark a virtuous cycle where increased profits could in turn attract greater investment.