As China surges forward as the world’s second largest economy, it comes as little surprise that it is the world’s largest solid waste generator, surpassing the U.S. in 2004. The World Bank predicts China will produce twice as much municipal solid waste as the United States by 2030. With the last official number tipping the scales at almost 3.3 billion tonnes in 2016, China is producing solid waste at an unprecedented rate.

To better grasp the larger picture, we looked at 31 major cities (27 provincial capital cities and 4 direct-governed municipalities) and explored the data for patterns and credible indicators in cities tackling China’s garbage overflow.

China’s Mountain Range of Garbage by the Numbers

Organized in descending order by total waste volumes on Chart 1 (household and industrial waste combined), we see the cities producing the most waste are Chongqing, Taiyuan, Shanghai, Kunming, and Nanjing. To better understand the rankings, we can further segregate the numbers. 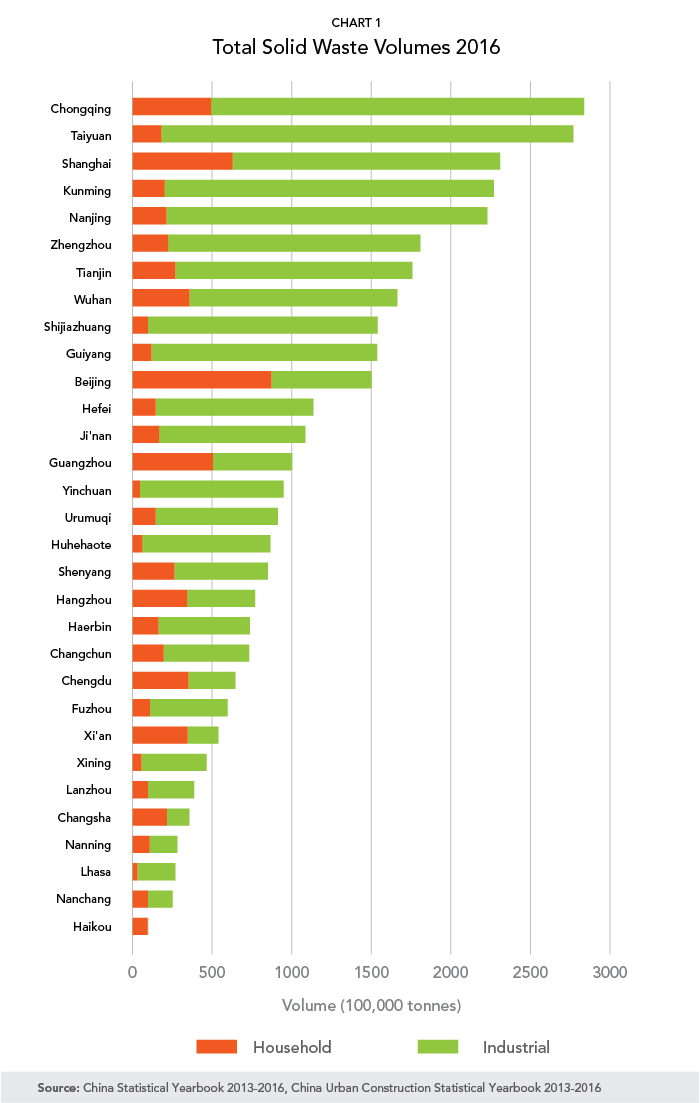 For analysis purposes, solid waste is commonly split into two streams depending on the mode of production – household (in red) and industrial (in green). From Chart 1, we see that industrial waste volumes dwarf household waste in almost all cities. The five exceptions are Beijing, Chengdu, Xi’an, Changsha, and Haikou, which have a higher percentage of household than industrial waste. 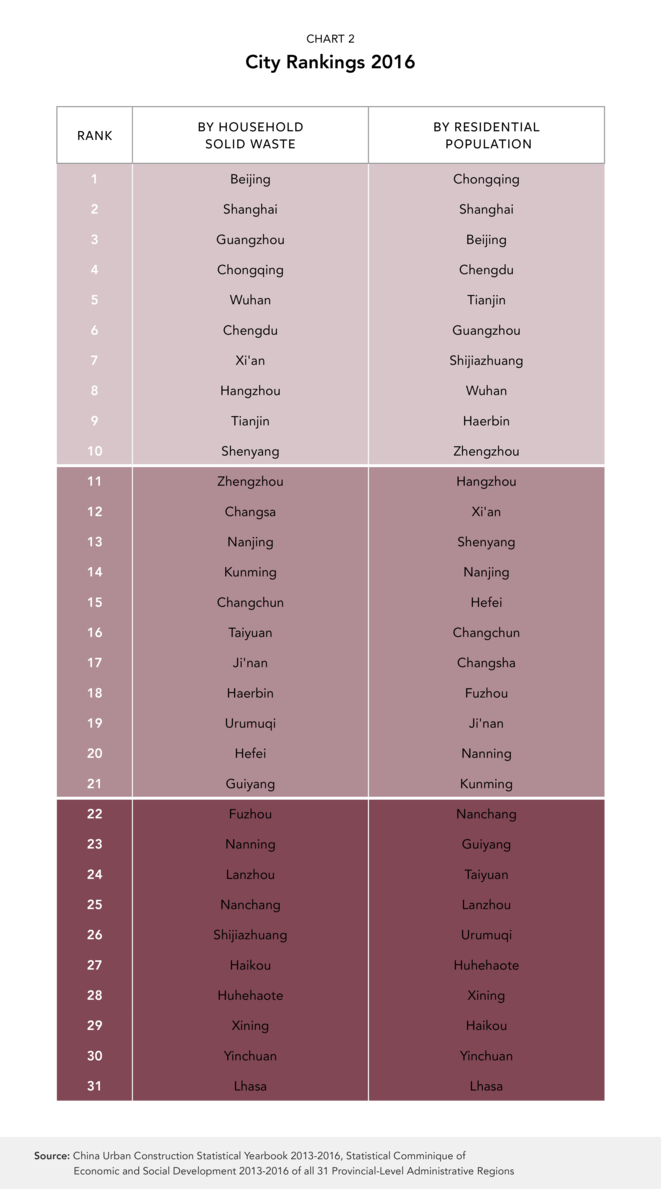 While most cities follow this pattern, there are a few outliers suggesting other factors are at play in their jurisdictions. The most compelling example is Shijiazhuang. As the capital and largest city of northern China’s Hebei province, it has a low amount of household solid waste, despite its high residential population.

It is interesting to observe that from 2013 to 2016, despite zero or slight population growth in Shanghai, Nanjing, and Lanzhou, household solid waste volumes in those cities actually decreased over the same period. It is also worthwhile to point out that Shanghai and Nanjing are actively educating citizens on recycling, and enforcing residential recycling programs. In 2015, Shanghai even vowed to become a zero landfill city by 2018 by curbing household waste and diverting it to waste energy facilities. Government policies and initiatives play a large role in greening cities, and with the 2015 revision of the Prevention and Control of Environmental Pollution by Solid Waste policy now in place, more cities may follow the lead of Lanzhou, Nanjing, and Shanghai.

Despite its enormous volumes of household solid waste, China fares quite well in terms of treatment. Twenty of 31 major cities treated all their solid waste in 2016, an addition of five cities since 2013. The remaining 11 cities are also treating more than 90 per cent of their solid waste.

However, it is misleading to take these numbers at face value without further analyzing the quality and level of treatment. Treatment processes may vary from city to city and some may need to improve in order to meet sustainability thresholds. This is where clean technologies from Canada could come into play.

Between the Skyscrapers: Industrial Solid Waste

Industrial waste is generally accepted as a reflection of economic development. Economic growth, especially in countries with a growing secondary manufacturing sector, might be expected to create a more noticeable trail of industrial waste. However, the data tells a different story.

In 2016, cities with the largest volume of industrial solid waste were Taiyuan, Chongqing, Kunming, Nanjing, and Shanghai with just over 258, 234, 206, 201, and 168 million tonnes, respectively. Since 2013, industrial waste volumes in most cities have generally decreased, as shown by the green bars reaching below zero (Chart 3). The cities lagging, as represented by green bars on the left of Chart 3, include Changsha, Yinchuan, Guiyang, Nanjing, and Zhengzhou. On the flip side, the superstar trendsetters include Nanning, Lanzhou, Chengdu, Haikou, and Beijing. These five cities have had the greatest success in curbing industrial solid waste, decreasing volumes by 56, 53, 35, 42, and 40 per cent, respectively, since 2013.

Over the same period, all the cities except Shenyang, Urumuqi and Lanzhou also achieved positive GDP growth. More impressively, industrial waste volume reductions were achieved despite soaring increases in secondary industry, depicted by the red bars above zero (Chart 3). This shows most major cities in China have been able to achieve a more sustainable, green growth in the past several years. 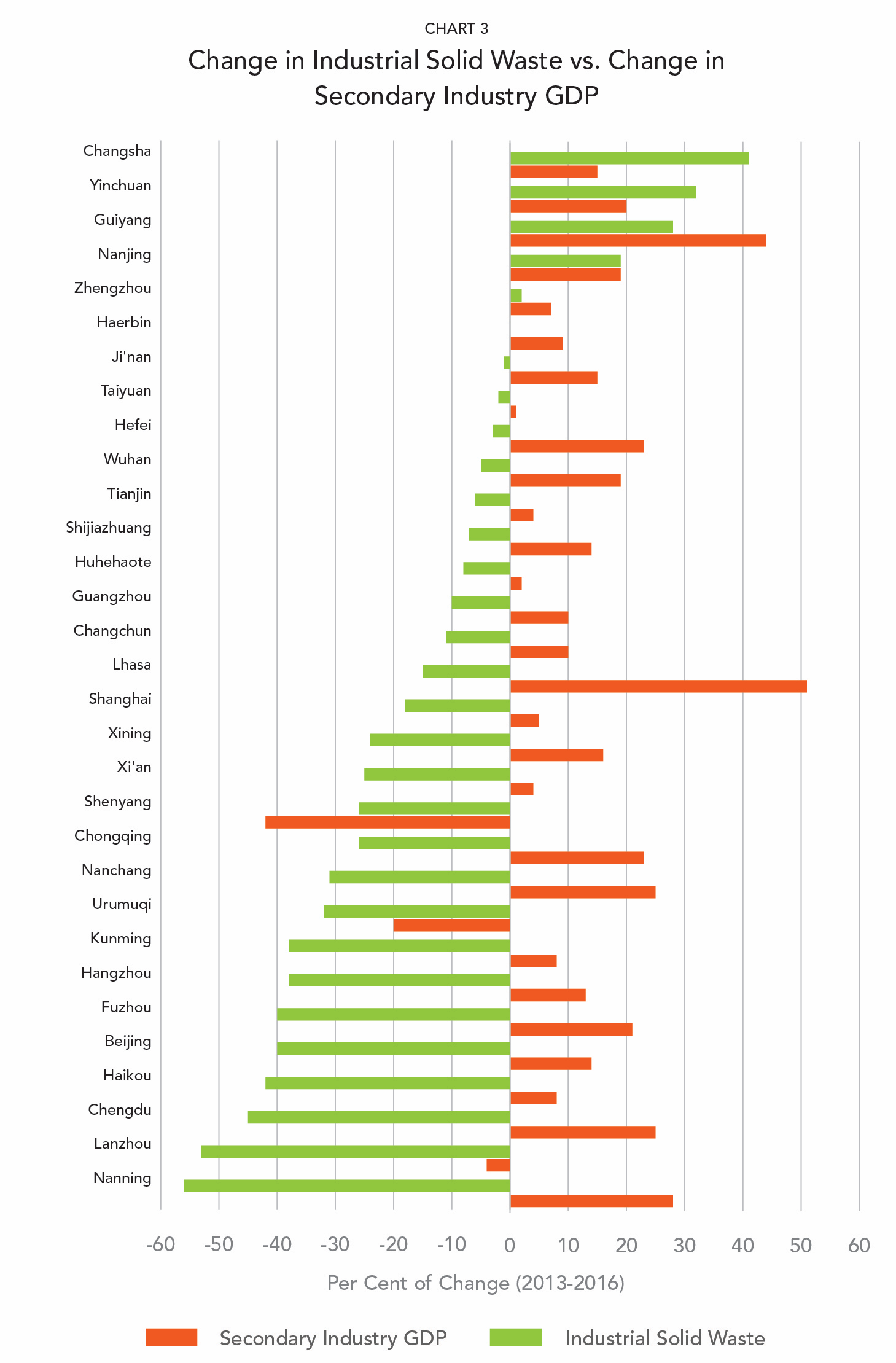 One reason for this could be China’s new found environmental protection policies. Over the past three years, China has mounted an unprecedented crackdown on polluting factories to meet environmental targets. Estimates suggest as many as 40 per cent of China’s factories have been temporarily closed for environmental reasons and officials in more than 80,000 factories have been charged with criminal offenses related to infringing on public and environmental health. This revolution may have, over the last few years, helped reduce industrial waste volumes as well as other types of pollution, including air and water.

Despite all its efforts, China overall has only realized a mere six per cent decline in industrial solid wastes between 2013 and 2016. A sobering indication of the ongoing challenges is the realization that industrial sources make up an overwhelming 94 per cent of all solid waste in China.

A Balanced Approach for the Future

From initial movements to curb solid waste by setting industrial solid waste targets in the 11th Five Year Plan to the most recent initiative of defining accountable parties under the Law on Prevention and Control of Environmental Pollution by Solid Waste (2015 revision), China has come a long way – but the work has only just begun. Not only is this problem mounting domestically, on the international stage China has also traditionally been a depository for waste from other countries. The bold move to ban many types of recyclables at the beginning of this year sends a message to the world: the health of China’s environment, people and economy will be prioritized.