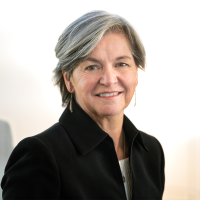 Martha Hall Findlay led Suncor’s efforts to address the nexus of climate and energy,  including strategic planning in collaboration with various Suncor teams, and stewarding many of Suncor’s external relationships and strategic collaborations, to build an environment that supports a future for Canadian energy. Martha was instrumental in the development of, and plays a critical leadership role on, the multi-company Oil Sands Pathways to Net Zero by 2050 initiative.

She was named a Canadian Climate Champion in 2021 by the British High Commission and the Canada Climate Law Initiative; she was named as one of Canada’s Clean50 for 2022; she was named by the Energy Council as a top global female oil and gas executive and one of the top 275 women influencers.

Martha joined Suncor in 2020 as Chief Sustainability Officer and played a key role in stewarding Suncor’s many external relationships and strategic collaborations in support of the company’s ongoing economic, environmental, and social performance leadership.

Prior to joining Suncor, Martha was the President and CEO of the Canada West Foundation, one of Canada’s most important public policy think-tanks, where her focus was on strong public policy recommendations for the economic and social prosperity of Western Canada, and by extension Canada as a whole. She has written dozens of essays, articles, and op-eds for national publications in both official languages and has frequently appeared as a thought leader in national print and broadcast media.

She has over 30 years of experience as a corporate lawyer, international trade expert, senior executive, and successful entrepreneur, supporting major multinationals as well as startups – primarily in wireless telecommunications and mobile payments, both in Canada and in Europe.

As a twice-elected Member of Parliament, she served in the Official Opposition shadow cabinet for International Trade; Finance; Transport, Infrastructure and Communities; and Public Works and Government Services, and she served on the House of Commons Standing Committees for all of those portfolios. She is currently a member of the Minister of International Trade’s Trade Expert Advisory Council.

Martha’s community engagement has included serving as an advisory council member, board director and executive for a variety of policy, environmental, community, and cultural organizations including the Energy Futures Lab, Positive Energy (University of Ottawa), Protein Industries Canada, the Glenbow Museum, the Georgian Bay Association, and CKUA Radio Network. She is currently a member of the Board of Directors of the Canadian Chamber of Commerce and a member of the energy advisory board for MaRS.

She was Canadian Championships silver medalist in alpine skiing (1976), coached several young skiers who went on to compete in the Olympics, and served six years on the Board of Alpine Canada, her last two as Chair.

Martha has a Bachelor of Arts in International Relations from the University of Toronto and an LLB from Osgoode Hall Law School. She also holds the Institute of Corporate Directors ICD.D designation.