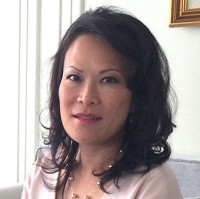 Veronica Lukito is the Founder & CEO of Berkeley Investment Asia which is an investment firm managing family office and institutional funds across asset classes in particular venture, real estate and alternative finance. Since 2018, Veronica serves as a Council Member of the Asia Business Leaders Advisory Council (ABLAC) which is part of the Asia Pacific Foundation of Canada. Since 2015, Veronica serves as a member of the International Reference Group which advises Australia’s DFAT the Innovation Exchange.

Veronica previously founded Ancora Capital Management where she was the CEO and Managing Director for seven years. Ancora Capital Management is an Indonesia-focused private equity fund management firm founded in 2007 as one of only a handful of firms that can lay claim to shaping that fast-growing sub-sector in Indonesia. Since then, Ancora and its predecessor entities have invested close to USD 400 million, primarily in natural resources, consumer-related and similar businesses, and special situations.

In addition to establishing at the time a type of business still distinctively new to Indonesia, Veronica was involved in setting up various investee companies for the firm’s investments in plantation, health care and education. With a breadth of experience on the ground, she is deeply knowledgeable of Indonesia’s intricate investment and start-up environments.

Before she became an entrepreneur and private equity investor, Veronica was a Vice President in the investment banking division at J.P. Morgan in Indonesia, where she handled client relationships and sourced and executed numerous transactions encompassing financing, acquisitions and corporate restructuring deals. Prior to JP Morgan, Veronica spent two years at Indosat, the second largest telecommunication operator in Indonesia. Veronica started her career in investment banking as an Assistant Vice President at PT Bahana Securities, which was the de-facto partner of Goldman Sachs in Indonesia. Veronica also spent three years as a corporate and credit banker at Citibank N.A. in Jakarta, handling top-tier Indonesian conglomerate relationships. Veronica earned a B.S. in Business Administration from the Haas School of Business at the University of California, Berkeley. She also completed the Advanced Management Program at Harvard Business School.