Despite India’s status as a primarily agrarian economy, with most working-age adults employed in the agriculture sector, volatile crop prices, rising transportation and storage costs, erratic weather patterns, and debt-trap cycles have made farming an increasingly unsustainable economic activity. The recent death of an areca nut farmer in Sringeri, Karnataka, underscores the larger question of government support for farmers, financial policies to protect farmers and their families, and the need for research and development in agriculture to meet the growing challenges of the industry.

A 36-year-old areca nut farmer in Sringeri took his own life after his crops were hit by leaf spot and yellow leaf disease (YLD), leaving him unable to repay a C$464,000 (28.25 million Indian rupees) private loan taken for his plantation. The growth of yellow leaf disease since the 1950s has impacted around 35 per cent of all areca nut plantations in India, and raised concerns for its farmers across the country. This tragic case in Sringeri highlights not only the environmental and financial stressors that farmers must cope with, but also the vicious cycle of debt that will affect the farmer’s family for generations to come as the debt generally passes onto the next male family member.

As the world’s largest producer of areca nuts, India’s areca nut farming sector employs millions of people. Areca nut is classified as an addictive substance and carcinogenic to humans, yet it is one of the most widely consumed substances globally, after nicotine, ethanol, and caffeine. Within India, almost a quarter of the adult population consumes the nut, also known as supari. A component in several South Asian religious and social ceremonies, India exports areca nut to more than 50 countries worldwide, including Canada, which sources more than 90 per cent of its areca nut imports from India. However, diseases like YLD, which also impacts tomatoes, have threatened production levels.

Meanwhile, within India’s agricultural sector, there are up to 30 suicides per day. This alarming data points to a long-existing issue of suicides in India’s agriculture sector, driven by low crop yields, high-interest loans, and minimal support systems, be it psychological, social, or financial. The incidence of farmer suicides has been growing in the state of Maharashtra, whereas in Karnataka and other states, it has been on the decline (Table 1). The government notes that the proportion of people engaged in the agriculture sector has decreased over the years, and the official statistics indicate that the number of suicides among farmers and labourers “dropped” to 10,851 in 2021. Meanwhile, climate change and local politics are leaving farmers in a dire situation. In Karnataka, one of the world’s most water-stressed regions, the Congress-led government instituted a policy in 2016-17 protecting drought-impacted farmers from loan recovery. However, by 2020, the new government led by the Bharatiya Janata Party withdrew that protection. 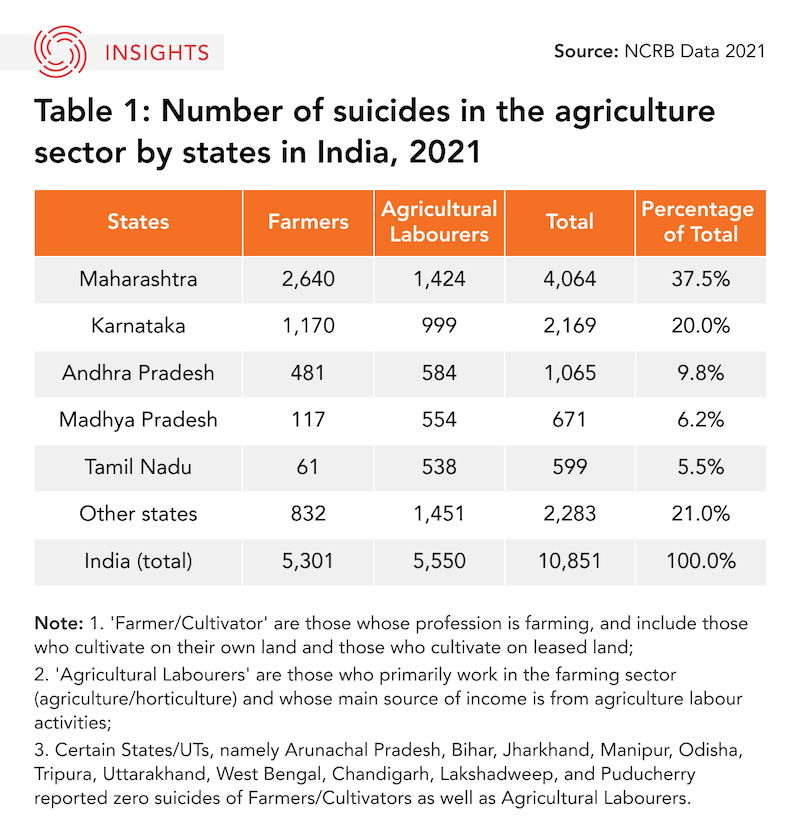 Note: If you or someone you know is struggling with thoughts of self-harm, please seek help and guidance. Consult this link for guidance from the Government of Canada.