When it became clear that a novel coronavirus outbreak had emerged in Wuhan at the end of January, the Johns Hopkins University forecasted that Taiwan would fare badly due to its proximity and dense business and travel ties to China. Months later, as much of the world becomes mired in the COVID-19 pandemic, Taiwan has flipped that forecast on its head, having recorded only 440 cases and six deaths at the time of writing.

Pundits and health experts have lauded Taiwan for its early and effective epidemic response. Measures such as the app-based distribution of masks and contributions by prominent figures in Taiwan’s fight against COVID-19 have captured media attention around the world. But observers have paid scant attention to the institutions that enabled and enhanced Taiwan’s early epidemic response measures. As questions arise over Canada’s own epidemic preparedness, it is worth exploring whether Canada can learn from Taiwan, particularly in terms of instituting public health capacity ahead of time and co-ordinating epidemic responses across both central and local governments during times of crisis.

Instituting and planning for epidemic preparedness

Taiwan has enacted laws, formulated policies, and established institutions to empower experts during epidemics, which has improved its epidemic preparedness. Much of this work occurred after Taiwan’s SARS outbreak in 2003, in which 73 people died. For example, in 2004 the government established the National Health Command Center (NHCC), which is placed under the Taiwan Centers for Disease Control (CDC) that in turn operates under the Ministry of Health and Welfare. The NHCC has an integrated information system that can gather real-time information from multiple government databases, such as the National Health Insurance (NHI), stockpile systems, the Taiwan National Infectious Disease Statistics System, and media reports. This integrated information system, which is managed by the NHCC, has been crucial in gathering early data on the COVID-19 outbreaks in China and other parts of Asia. 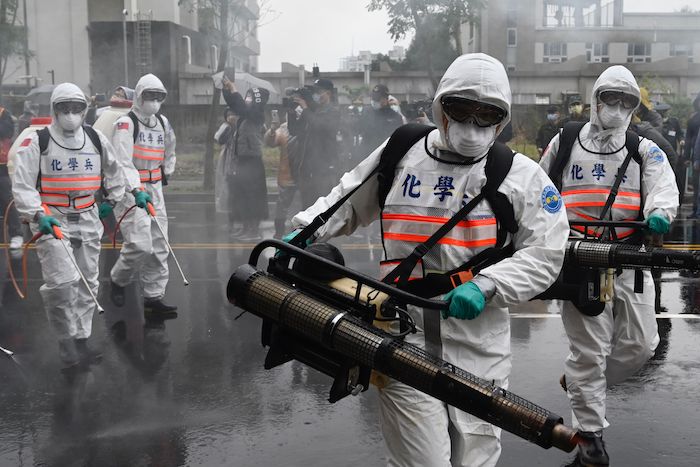 Taiwanese Soldiers take part in a drill organized by the New Taipei City government to prevent the spread of the COVID-19 coronavirus, in Xindian district on March 14, 2020. | Photo: Sam Yeh/AFP via Getty Images

Post-SARS, the Taiwanese government also revised existing regulations to strengthen the authority of the CDC. For example, revisions to the Regulations Governing Quarantine at Ports between 2004 and 2017 expanded the authority of both the CDC and local health authorities to quarantine and monitor travellers who were either infected with or suspected to carry a communicable virus, particularly during an epidemic. These amendments enhanced Taiwan’s epidemic response. On December 31, the same day that Wuhan confirmed its first cluster of novel pneumonia outbreak (now known as COVID-19), CDC officials began onboard inspections of direct flights from Wuhan. On January 21, through such inspections, the CDC identified a suspected case of COVID-19 on board a flight from Wuhan, who later tested positive. This was Taiwan’s first case of COVID-19. The passenger in question was quarantined before she exited the plane, minimizing risk of community transmission.

In addition to institutions and regulations, the government prepared a clear strategy of preventing and controlling the spread of a disease through travel. The Ministry of Health and Welfare created an elaborate plan in 2017 to enhance disease inspection at airports and ports. This plan identified existing problems in controlling travel-related diseases, defined strategic goals, and allocated a budget for addressing these problems. The principle problems identified were increased international traffic coupled with outdated screening and tracking technologies. In response, the ministry built a “smart quarantine network,” upgraded the information sharing system from paper-based to electronic, built apps to track down potential carriers of epidemic disease and connect government and civilian databases on travel histories. To increase border screening capacities, the ministry increased the number of quarantine officials, purchased infrared thermal equipment and temperature testers, and produced educational materials on communicable diseases for Taiwanese travelling abroad.

The Enforcement Regulations Governing the Central Epidemics Command Center (Enforcement Regulations, hereafter), which was promulgated in 2004, is a key component of Taiwan’s epidemic preparedness. During an epidemic, the Enforcement Regulations allows the Ministry of Health and Welfare, with the approval of the Executive Yuan, to establish a Central Epidemic Command Control (CECC) to formulate policies, integrate resources, and co-ordinate responses across different government ministries and agencies. The CECC is then dissolved if the commanding official deems that the threat level is low enough, pending executive approval from the central government. 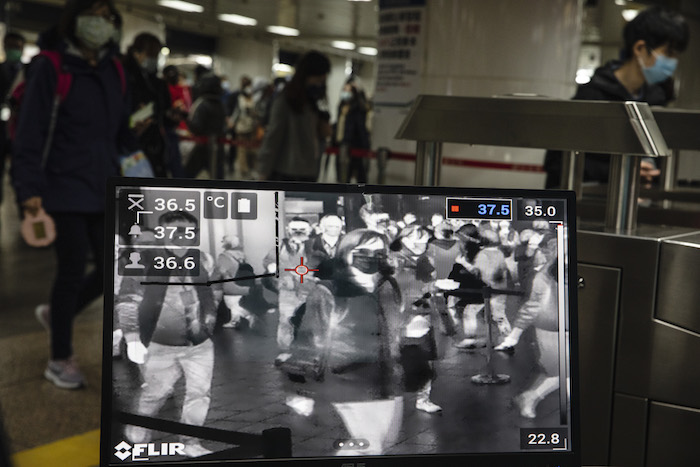 Taipei metro staff in the MRT station monitor the temperatures of passengers with a thermal scanner on March 19, 2020 in Taipei, Taiwan. | Photo:  Paula Bronstein/Getty Images

In the case of COVID-19, the CECC was established on January 20, three days before Wuhan went into lockdown. On January 24, the president of the Executive Yuan appointed Chen Shih-chung, the Minister of Health and Welfare, as the commanding official of the CECC to spearhead an inter-ministerial response. Below Chen, the CECC has three divisions: intelligence, operations, and logistics, each containing targeted teams composed of officials and specialists from relevant ministries and agencies. Under the intelligence division, for example, the epidemic monitoring team is staffed by top officials from both the CDC and Taiwan’s Ministry of Foreign Affairs and is responsible for communicating and monitoring domestic and international viral transmissions. Under the logistics division, a supplies team is made up of Ministry of Economic Affairs, Industrial Development Bureau, and Ministry of Health and Welfare officials. There are nine teams in total across the three divisions.

Powered by the integration of officials from across the government, the CECC has been able to put its comprehensive power under law into practice in a planned and co-ordinated way. For example, under the Communicable Disease Control Act, the CECC can expropriate or requisite private land, products, and buildings for disease control practices. This legal authority, combined with the Command Centre’s integration of economic and industrial officials, enabled the government to mediate between machine tool makers and mask producers, monitor their capacities, and incentivize higher levels of mask production. In another example, under the Enforcement Regulations, the CECC conducts matters related to the entry and exit of the country, such as restricting travel. When the CECC announced a level 3 travel advisory for mainland China on January 28 in accordance with this provision, it had the support of in-house immigration and Mainland Affairs officials to implement the measure.

It goes without saying that Taiwan’s COVID-19 responses contains many lessons for the world. Decision makers and advocates in Canada may also do well to consider the Taiwanese model of epidemic preparedness, particularly over questions on how an effective response to the epidemic can be co-ordinated among government units, how government and private sector co-operation can be forged, and how health governance and emergency preparedness can be improved through laws, institutional capacity building, and contingency plans. 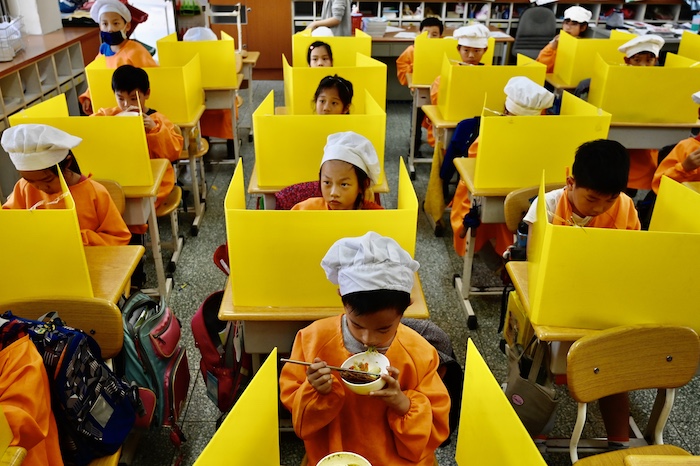 Students eat their lunch on desks with plastic partitions as a preventive measure to curb the spread of the COVID-19 coronavirus at Dajia Elementary School in Taipei on April 29, 2020. | Photo: Sam Yeh/AFP via Getty Images

While many in the media are justifiably focused on specific measures Taiwan adopted, such as app-based mask purchasing and big data tracing, it is important to step back and consider the broader institutional landscape that facilitated the adoption of such measures. At its international ports, Taiwan places significant discretionary power over screening and testing at the hands of its CDC, backed by solid technological and personnel infrastructures. Within its borders, Taiwan’s government has instituted two command centres, one standing and one ad-hoc, to integrate information and co-ordinate responses. When the time comes, the ad-hoc command centre is supported by both legal authority and practical expertise. Time will tell whether some version of these institutions will find their way to Canada, but the current pandemic may prove to be a much-needed wake-up call.

How China is Helping its Anxious University Graduates Find Jobs During COVID-19 Protecting Seniors During COVID-19: What Canada Can Learn From China What is China Going to Do After COVID-19 is Over? Read more >