It should come as reassuring news to the international community that China appears genuinely committed to addressing climate change and promoting clean-tech innovation. China’s 13th five-year plan lays out one of the world’s most anticipated and far-reaching blueprints for green development. Its ‘Belt and Road Initiative’ sets ‘ecological civilization’ as a primary goal: the modern Silk Road would foster the flow of clean technologies between borders and promote global collaborations for a low-carbon economy. Last year, China also broke the international takeover record of large, clean-tech projects, the total value of which exceeds US$ 44 billion.

China’s ambitions for its low-carbon future has huge, but complex, export and investment potential for international participants, especially for Canadian clean-tech companies. By visualizing China’s commitments in clean technologies and comparing these commitments to the country’s current status in developing its clean-tech industry, an interesting picture emerges. 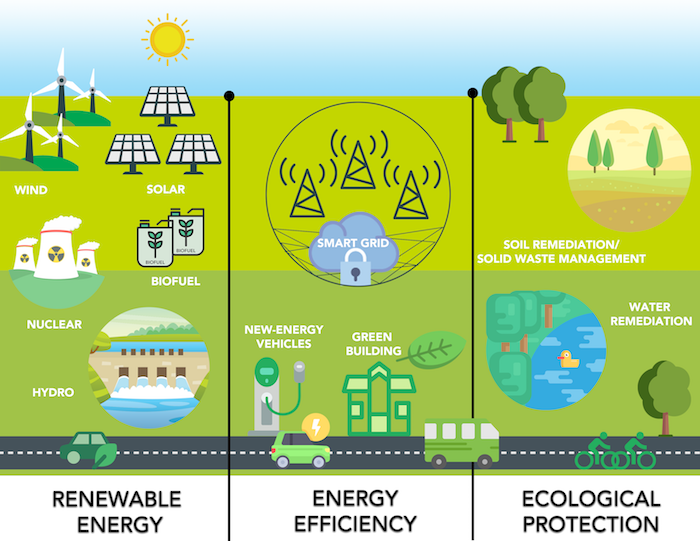 China is leading the world’s renewable energy revolution. Since 2013, severe air pollution and climate change fears have driven the smog-ridden country away from fossil fuels. Renewable energy development is key to reducing green-house gas (GHG) emissions from coal which is burned to generate power. Chinese political leaders view renewable energy as the way of the future and a powerful engine for job creation. At the start of 2017, they announced an investment of US$ 360 billion in renewable energy by 2020, a move which will create 13 million additional jobs in the sector.

Current trend. China appears to be ahead of schedule in meeting these goals. Official figures show coal consumption in China fell in 2017 for the fourth straight year. And by the end of 2013, the share of installed non-fossil fuel generation capacity (30.6 per cent) had surpassed the goal set for 2015 (30 per cent); As a result, the National Energy Administration (NEA) adjusted the 2014 goal to 32.7 per cent. And given that by 2017 the share of installed non-fossil fuel generation capacity had already hit 38.7 per cent, it seems likely the country will reach its 2020 goal by next year.

Hydro continues to be the leading renewable power source in the country, but growth is greatest in solar and wind energy.  On the solar front, solar power generation capacity grew more than 700% over the past 5 years; the country now accounts for 60% of world’s solar cell production. By 2017, China had already met its 2020 target of installing 110 GW of solar, causing the Chinese National Renewable Center to increase the target to 200 GW. The estimated installed capacity of wind by 2020 is now set at 264 GW, far surpassing the original target of 210 GW set in the five-year plan. 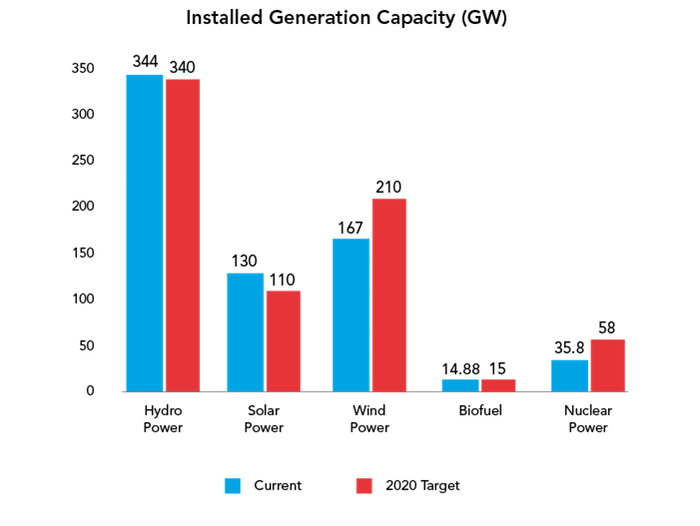 By contrast, the development of biofuels and nuclear power is moderate. The most recent five-year plan makes limited mention of biofuels, implying that biofuels will likely play only a minor role in China’s decarbonisation of its transport sector. While there are 21 nuclear power plants now under construction, regulators in China have not approved any new nuclear energy projects since the 2011 Fukushima disaster in Japan. The 2020 target to reach 58 GW nuclear power capacity is therefore, unlikely to be met. Chinese regulators are now very cautious of having a big nuclear program; and are searching for advanced technologies to ensure future projects meet the highest possible safety standards.

Besides the renewable energy revolution, energy efficiency and conservation are also high on China’s political agenda. The 13th five-year plan commits to a 15 per cent decline in energy consumption per unit of GDP by 2020, and a reduction of the carbon intensity of its GDP from 40 to 45 per cent by 2020 (relative to 2005). To achieve that, Chinese government policies focus on three sectors: smart grid capabilities, green building technologies, and the adoption of new-energy vehicles.

Smart grid stands for advanced technologies for highly-efficient and cost-effective energy storage. It can help enhance the reliability of electricity supply by integrating intermittent renewable power sources and using control systems to ensure energy efficiency. In 2009, State Grid, China’s state-owned electricity utility, announced plans to invest over US$ 285 billion to construct a ‘unified strong and smart grid’ project by 2020. 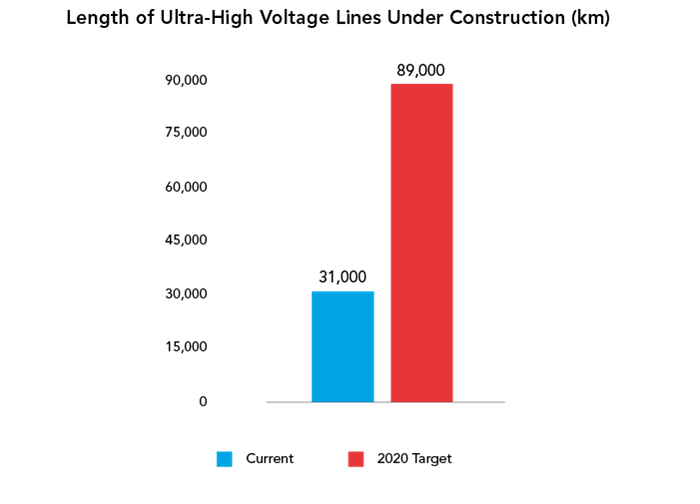 Targets. The focus of the smart grid plan in China is to build an ultra-high-voltage (UHV) transmission grid, a key technology that ensures efficient integration of renewable energy power over long distances. China is the first country to set the development of ultra-high-voltage power lines as a government priority. State Grid aims to construct 4200 km UHV transmission grid by 2010, 40,000 km by 2015, and eventually 89,000 km lines by 2020. Beijing also committed to having smart meters in widespread use by 2020.

Current trend. The smart electric meter market is currently the most mature in China. The number of households with installed smart meters grew from 191 million in 2013 to 447 million in 2017, a penetration rate of 99 per cent.  Due to the near-saturation of this market, further growth will mainly come from newly-built residential buildings. The growth rate is expected moderate as the 13th five-year plan has significantly lowered the real estate growth goal in the country.

The annual growth rate of ultra-high-voltage transmission grid construction has also shown a marked slowdown over the past five years. There are two reasons for this. First, construction costs are hefty and current technological constraints limit the actual transmission of intermittent renewable energy power. Second, the National Energy Administration and State Grid appear to have different priorities. The NEA seems to prefer strengthening regional grids, whereas State Grid’s UHV plan calls for inter-connection between regional grids. The future development of smart grid projects in the country are highly dependent upon further technological advancement and political coordination among state agencies.

Improving energy efficiency of buildings is crucial for China to realize its national green development strategy. Over the past several years, government policies have created building codes that set minimum construction standards for energy efficiency. The Ministry of Housing and Urban-Rural Development in 2008 also implemented a National Green Building Evaluation Label certification. They aim to cut energy use of buildings in all cities by 50 per cent by 2010 and 65 per cent by 2020.

Current trend. The Chinese green building revolution is relatively young; available data only dates from 2013 to the end of 2016. By the end of 2016, China had constructed over 1.25 billion square meters of green buildings and 29 per cent of new construction met the green building standards. Despite ambitious national policies and strong local examples, China still focuses on specified pilot programs, many of which are located on the coastal area. Inland cities still face several green-building challenges such as: comprehensive urban planning, policy and regulatory implementation, and the deployment of available energy efficient technologies. While multinational corporations have taken the lead in promoting green buildings in China, local developers and companies lag behind. Only 19 per cent of landlords in the country have expressed plans to incorporate green building standards in their existing projects.

New-energy vehicles, especially electric vehicles (EVs), are key to China’s green transportation program, as the country tries to curb petroleum demand and GHG emissions in the road transport sector. This program began in 2009 when Beijing launched the ‘Ten Cities, Thousand Vehicles’ program, to stimulate EV development through large-scale pilots in 10 cities, a program which was later expanded to 25 cities.

Current trend. Over the past five years, China has become the EV industry’s global leader. In 2015, the country achieved record sales of over 200,000 EVs, surpassing markets in Europe and the United States. In 2017, more than 600,000 thousand EVs were sold, up 71 per cent over 2016. China produces roughly half the number of EVs sold worldwide and attracts 40 per cent of global investment in the sector. 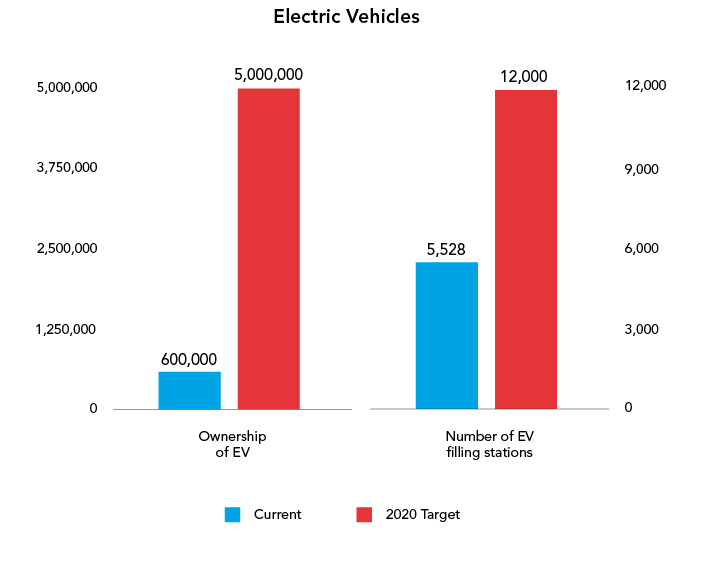 Despite the technological advantage China enjoys in this sector, the Chinese EV market does not seem to be too enthusiastic to meet Beijing’s ambitions. By 2017, the original state targets for EV market share were far from being met, despite generous government subsidy schemes. Beijing had to reset the target to one million units by 2018 and two million units by 2020. Meanwhile, the domestic market is highly protected and almost all EV purchased within the country are locally produced; foreign brands represent only 4 per cent of EV sales.

In addition to renewable energy development and the energy efficiency revolution, ecological conservation and environmental protection also stand out as national priorities. The 13th five-year plan has set some serious targets in order to address water and soil pollution in China.

Issued by the State Council in 2015, the new Water Plan is essentially a complete reset of China’s water use and treatment program. This ambitious plan includes 10 key measures and 38 sub-measures with clearly defined timelines and government department responsibilities.

Targets. There are two targets for water remediation in China: 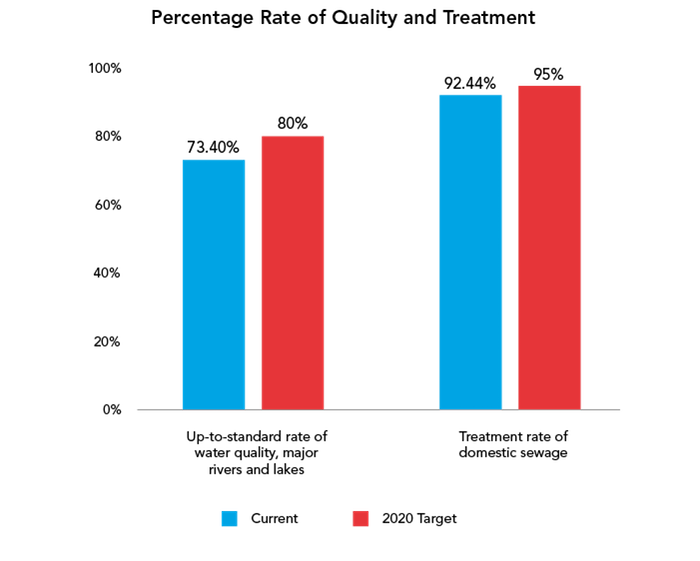 Current trends. The current progress of water remediation, however, is quite slow. By last year, the Chinese government had nearly 8,000 water clean-up projects underway at 343 contaminated sites, for a projected total cost of US$ 100 billion. Though treatment rates at major rivers and lakes and domestic sewage treatment has risen to 73.4 per cent and 92.4 per cent respectively, a Beijing-based NGO points out only 35 per cent of 12,226 monitored sites across the country have good quality water. Another 32 per cent are suitable as a water supply, 20 per cent are suitable for industrial or agricultural use – but not for human contact – and 13 per cent are useless. In this context, China is expected to seek out more technology supply and wastewater treatment assets from international companies.

The surging volume of solid waste has been another key pollution concern for China. In 2005, Chinese regulators recognized and encouraged the use of municipal solid waste as a source of renewable energy. In July 2017, Beijing announced it would ban imports of 24 categories of recyclables and solid waste by 2018, reflecting the fact that China is generating more waste itself and needs to improve its own patchy recycling systems. 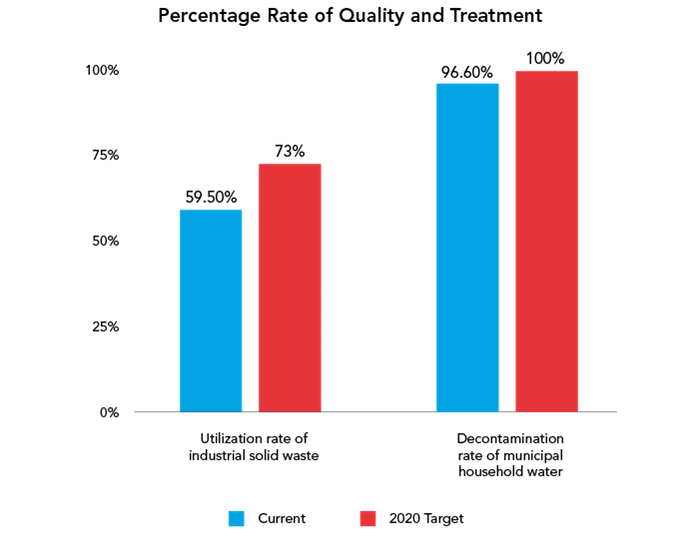 Current trends. China’s solid waste recycling industry still lags behind environmental demand. Whereas significant progress has been made to decontaminate municipal household waste during the past five years, the utilization rate of industrial solid waste was scaled back from 62.7 per cent in 2014 to 59.6 per cent in 2016. This is mainly because most of China’s recycling industry is privately held and many firms are too small and have lax pollution controls. Some Chinese recyclers also believe the 2017 ban on foreign recyclables is an effort by the government to push out private players. Today in China, there is no complete, legal, regulated recycling system in place.

China has demonstrated unwavering commitments to the Paris Climate Agreement. Its green development ambitions spell promising export and investment opportunities for Canadian companies. As they chart their course in the Chinese market, Canadians might face strong domestic competition in certain sectors like renewable energy development. In other areas such as energy efficiency and ecological protection, however, Canadian companies have much to offer. Canadian companies have the experience and technological expertise to help China further its commitments in these sectors, where domestic technology development still lags. A strong case can be made for enhanced international collaboration, and Canadian businesses should take the lead.